After months of grassroots anger directed at the Democratic Party over its debate schedule, the New Hampshire Union Leader and MSNBC plan to defy Democratic leaders and jointly host a debate for Bernie Sanders, Hillary Clinton and Martin O’Malley in New Hampshire five days before the state’s primary.

But no one knows whether the candidates will show up.

The Democratic National Committee has previously said that it would exclude any candidate or network that participates in an additional, unsanctioned debate from the future sanctioned debates, including a Feb. 11 event in Wisconsin and a March 9 event in Florida. NBC hosted the last Democratic debate on Jan. 17.

So far only long-shot Democratic candidate O’Malley has said he would participate in the New Hampshire debate, and it is unclear whether former secretary of state Hillary Clinton and Sen. Bernie Sanders will agree to join.

A spokeswoman for the Clinton campaign suggested that her appearance would depend on the other candidates. “Hillary Clinton would be happy to participate in a debate in New Hampshire if the other candidates agree, which would allow the DNC to sanction the debate,” said Jennifer Palmieri, communications director for Clinton.

The new debate is scheduled for Feb. 4 and would be hosted by MSNBC’s Rachel Maddow and NBC’s Chuck Todd, the Union Leader reported. “Our readers have demanded a debate to help them see who is most fit to be the Democratic nominee for President,” said Joseph McQuaid, president and publisher of the Union Leader. “We are glad to partner with MSNBC to ensure Granite Staters have the information they need to make a critical decision on Feb. 9.”

The debate would be the fifth of the primary season and give the three presidential candidates exposure on a national stage at a pivotal time in the nominating process, three days after the winner of the Iowa caucuses has been decided.

“In keeping with the best traditions of the New Hampshire Primary, we have always believed that the voters of the Granite State deserve more than one opportunity to see their candidates for President debate side by side,” O’Malley’s New Hampshire state director John Bivona said in a statement.

Under the leadership of chair Debbie Wasserman Schultz, the Democratic National Committee set a narrow debate schedule including just six debates, compared to the more than 20 debates in the last Democratic primary in 2008. The schedule has outraged party activists, many of whom have suggested the schedule is intended to protect Clinton from exposure to criticism. Both Sanders and O’Malley have repeatedly called for more debates, and Clinton has said she welcomes whatever party leaders decide.

The DNC suggested it did not plan to sanction the coming debate. “We have no plans to sanction any further debates before the upcoming First in the Nation caucuses and primary, but will reconvene with our campaigns after those two contests to review our schedule,” said DNC chair Debbie Wasserman Schultz.

The Feb. 4 debate was first reported by Buzzfeed. 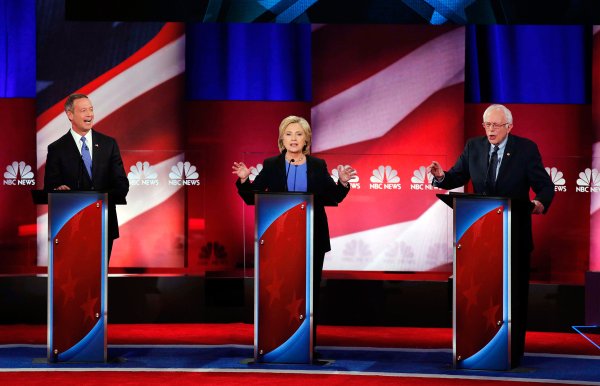