People are seen as silhouettes as they check mobile devices whilst standing against an illuminated wall bearing Twitter Inc.'s logo in London, U.K., Jan. 5, 2016.
Chris Ratcliffe—Bloomberg/Getty Images
By Kevin Kelleher

The tricky thing about change is that it can be hard to tell where it’s taking a company exactly. When big changes happen, is it a sign of progress, or a sign that things are going badly?

This is a question Twitter finds itself facing after yet another round of executive departures at the long-teetering social media company. This weekend, Re/code published a pair of stories saying that several high-level executives were leaving Twitter in what appeared to be a frenzy of corporate house-cleaning as CEO Jack Dorsey reshaped the company according to his vision.

Quickly, Dorsey took to Twitter to share a screen shot of a document that confirmed the departures, but took issue with the suggestion that he was cleaning house. Rather, Dorsey said, the four executives “have chosen to leave” to take “some well-deserved time off.”

In other words, no heartless housecleaning. No large-scale firings. Just four key managers who happened to jump ship at the same time. Other reports soon emerged that Twitter would be adding two high-profile additions to its board, perhaps to overhaul the board’s composition entirely. More changes at a company in the midst of a prolonged turnaround campaign.

Volatility in Tiwtter’s executive ranks isn’t anything new. In fact, it seems closer to being more of a time-honored tradition going back to Twitter’s startup days. When Dick Costolo was named Twitter CEO in 2010, he worked to bring stability to top-level management, with mixed results.

Weil, Roetter and Stanton each presented at Twitter’s Analyst Day in November 2014, helping to outline a plan to retool the service and draw in mainstream users who had shunned the site as too difficult to use. That plan helped revive Twitter shares for several months until it hit some speed bumps. Even so, as late as last May, CFO Noto was praising Weil and Roetter as vital to the company’s comeback.

Costolo himself stepped down as CEO last July, opening the way for founder Dorsey to become, first, interim CEO and then permanent CEO. Many Twitter supporters cheered the return of Dorsey to the CEO role, saying his clear vision and deep understanding of Twitter’s product were what the company needed to right itself and bring in new users.

Instead, Dorsey’s tenure has presided over a period of investor disenchantment. Twitter went public at $26 a share in November 2013. The stock had risen to $36.22 by the time Costolo handed the keys over to Dorsey. While that price was down significantly from Twitter’s record high of $69 a share, it still marked a gain of 39% from the IPO. Since Dorsey took over, Twitter’s stock has lost 53% of its value.

Twitter shares fell another 4.6% to $17.02 Jan. 25 following news of the latest departures. That wasn’t Twitter’s lowest close ever–its nadir was reached during last week’s global stock selloff–but it’s unsettlingly close to it. And it marks a 26% decline in Twitter’s market cap so far this year. Twitter is now trading 35% below what underwriters valued it at when the company went public 26 months ago.

Analysts responding to the departures saw little reason for encouragement. Bob Peck at SunTrust created a table of executives who presented at Twitter’s Analyst Day and found that a majority—62%—had since left the company. “While we may not be the sharpest tools in the shed, we don’t see how the departure of the heads of three major business divisions can be viewed as a positive in the middle of an attempted business turnaround,” wrote Stifel Nicolaus

The lower Twitter’s value sinks, the more attractive it becomes as an acquisition candidate. Google is often mentioned as a potential suitor, although the company hasn’t been in a buying mood lately. Last week, rumors emerged that News Corp. might be interested—before News Corp. shot them down.

Despite recent declines, Twitter may still be too expensive for potential suitors to find enticing. The stock is trading at five times its estimated 2015 revenue and 47 times its expected earnings. (That’s excluding stock-based compensation; factor in these compensation costs and Twitter will post a loss for 2015.)

The harder Dorsey tries to make a new Twitter that fits his vision, the more Twitter looks like the same old, chaotic Twitter. Dorsey’s best hope is to show that, amid the pessimism and turmoil, his plan to sign up and engage more users is working. He’ll have that chance on Feb. 10, when Twitter is due to report its fourth-quarter earnings.

Until then, Dorsey has his choice between two unpalatable narratives. Either his top lieutenants are being forced out in purge, or they’re fleeing on their own. Neither narrative tells a story of a company moving forward. 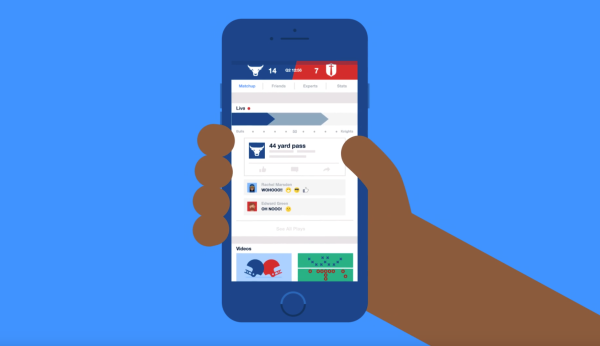 Facebook's Newest Feature Makes it Feel Like You're Watching the Big Game With Your Friends
Next Up: Editor's Pick