We've Neglected Diseases Like the Zika Virus for Too Long

Aedes aegypti mosquitos are seen in containers at a lab of the Institute of Biomedical Sciences of the Sao Paulo University in Sao Paulo, Brazil on Jan. 8, 2016.
Nelson Almeida—AFP/Getty Images
Ideas
By Marilyn Parsons
Dr. Marilyn Parsons is a Professor of Neglected Infectious Diseases and Director of Training and Professional Development at the Center for Infectious Disease Research.

The world is faced yet again with an alarming disease for which we are woefully unprepared to combat: the mosquito-borne Zika virus. Just a few years ago, the virus was not present in the Western hemisphere. Today, there are up to 1.3 million estimated cases in Brazil, and cases have been reported in other countries in South America, Central America, and the Caribbean, as well as in the U.S.

Mosquitos kill more humans every year than any other animal. We know exactly how dangerous they can be, making the frequency with which they catch us off guard all the more disconcerting.

There is no treatment or vaccine for Zika. There is no fast method for diagnosis. We aren’t even certain yet if the tragic effects seen in Brazil—a vast spike in birth defects inhibiting development of the brain—can be attributed to Zika alone. Doctors are rightly suspicious, given the number of mothers infected with Zika, but the necessary research to prove this connection has yet to be completed. El Salvador has recommended women forego pregnancy for the next two years, and Center for Disease Control officials have issued an advisory warning pregnant women against traveling to Brazil.

How wide and how quickly Zika will spread is not yet clear. But we need look no further than other recent tropical virus outbreaks for some comparable data.

For example, the first cases of mosquito-to-human transmission of chikungunya, another debilitating virus, were detected in the Americas in 2013. By late-2015, the number of cases increased to more than 1.7 million. Transmission began in Florida in 2014 and is ongoing in Puerto Rico, where more than 27,000 cases have been reported. No treatment or vaccine yet exists for this disease, but thankfully it isn’t known to be fatal in most cases.

Unfortunately, the same can’t be said for yet another mosquito-borne example, dengue fever, a brutal virus that incites fever, pain and severe hemorrhagic bleeding in more serious cases. About 400 million people globally are estimated to contract dengue every year, and health workers are currently battling an outbreak in Hawaii, where more than 200 people have already been diagnosed. In recent weeks, a vaccine for dengue has been approved in Mexico, Brazil, and the Philippines. This is a start, but the vaccine is still not approved for children below the age of 9, despite the virus being a major cause of mortality in children.

What is driving this alarming spike in the spread of these infectious mosquito-borne diseases?

Climate change is one part of the answer. As temperatures increase and rainfall patterns change, mosquitoes and other insects can remain active for longer seasons and thrive in new areas.

Movement of people is another significant challenge. With individuals now able to cross the globe in less than a day, diseases once thought far away are a short plane ride away. Infected mosquitoes themselves can even make these journeys, through hitchhiking on the transfer of freight. This is compounded by the fact that viruses and mosquitos have the propensity to genetically mutate, opening up new challenges to containing them and developing treatments.

Why are we so far behind in addressing these diseases? And what, if anything, can we do about it? The answer starts with a stronger investment in science.

Funding from the National Institute of Health is crucial to enabling scientists to do the research work necessary in order to uncover vaccines, drugs and other treatments to cure diseases. NIH funds make up two thirds of all university research funding. Unfortunately, NIH funding has been flat or falling for several years. The recent 6% increase in NIH funding is a welcome sign, but the cost of biomedical research has grown faster than inflation by nearly 2 to 1 in recent years. More resources are urgently needed.

We also must take a longer-term view when it comes to our global public health. We live in a rapidly changing world—viruses like Zika that were once thought inconsequential can change trajectory in the blink of an eye. Within the U.S. and other developed countries, we are prepared to quickly address new strains of influenza, such as bird flu or H1N1, because we feel the effects firsthand, and know the virus can spread quickly. Yet we don’t follow these same practices with emerging infectious diseases.

Last week, Dr. Anthony Fauci, the head of the National Institute of Allergy and Infectious Diseases called for a “full-court press” to develop a vaccine for Zika. I and many other scientists received an urgent notice advising of new funding released to research the Zika virus.

Renewed urgency from officials is welcome, but it can take years, even decades, to develop new drugs and vaccines for complex and neglected diseases such as Zika, chikungunya or dengue. This work begins with answering a series of questions to help us better understand these viruses, bacteria and parasites: How do they enter the bloodstream? Where do they hide? How do they interact with our immune systems? Understanding the interaction between pathogens and our immune systems is critical if we want to develop solutions. Waiting until they are on our doorstep is reckless and shortsighted. Where lives are at risk, we should bring every resource we have to speeding up this process.

In the meantime, insect repellant, removing places where insects can breed (usually small pools of water), and altogether avoiding travel to particular regions of the world are the best means of protection we currently have. These are far from satisfying, or precise, fixes. 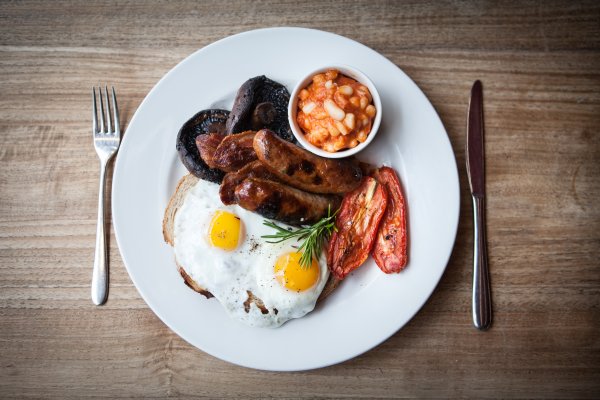 Our Official Dietary Guidelines Are Useless
Next Up: Editor's Pick