Banksy Mural Criticizing Teargas Use on Refugees Is Boarded Up

The artwork features a girl from the musical “Les Miserables” with tears in her eyes as a can of teargas billows up from the ground.
Carl Court
By Melissa Chan

The latest artwork by the elusive street artist Banksy, which appears to criticize the use of teargas on refugees at the Calais migrant camp known as “the Jungle,” has been boarded up.

The world’s most famous and mysterious graffiti artist had put up the mural near the French embassy in London late Saturday, the BBC reports. It shows a young girl from the musical Les Miserables with tears in her eyes as a can of teargas billows up from the ground.

Workers on Monday covered up the artwork, but building developers hinted to the BBC that they plan to preserve it. Cheval Property Management Limited was “discussing future plans for the artwork,” its director Mike Sadler told the news outlet.

In December 2015, Banksy sprayed a graffiti piece showing Apple founder Steve Jobs, the son of a Syrian immigrant, with a sack slung over his shoulder and a computer in the other hand, on a wall at the migrant camp. 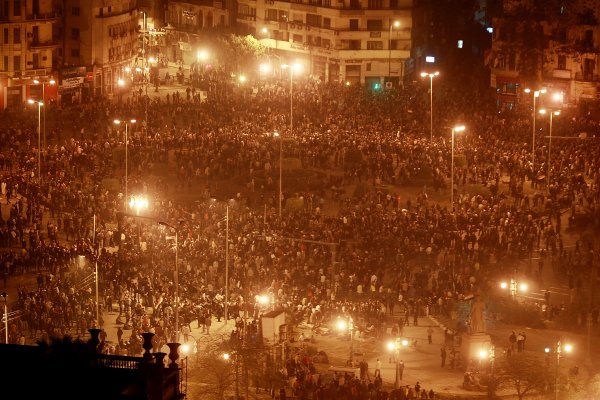 Why I Missed My Daughter's First Words to Cover the Arab Spring
Next Up: Editor's Pick