The Vermont Senator was on the defensive at the CNN Town Hall Monday night when an audience member asked him about his assertion last week that Planned Parenthood and the Human Rights Campaign are part the “establishment” he plans to bring down. Both organizations recently endorsed Hillary Clinton, in the first primary endorsement in Planned Parenthood’s history.

Sanders reiterated his support for Planned Parenthood and called for increased funding before clarifying his comment. “What I said on a television program, and I did not say it well, is that sometimes the base of an organization looks at the world a little bit differently than the leadership,” he said. The implication was that the leadership of Planned Parenthood might be “establishment,” even if the base is not.

And he’s not totally wrong. Planned Parenthood is “establishment” in exactly the same way Hillary Clinton is “establishment.” The organization has been a fixture in American politics for decades. It has built connections (some of them on Wall St) and weathered controversies. Every move is scrutinized by political enemies. Planned Parenthood president Cecile Richards was grilled by House Republicans just a month before Hillary Clinton survived a grueling 11-hour hearing on Benghazi.

The problem is that so far in his campaign, Sanders has used “establishment” as a pejorative. The word implies that something (or someone) is out-of-touch, corrupt, even vaguely evil. So by applying that term to an organization—or even the leadership of an organization—that has become a rallying cry for Democrats and and is viewed favorably by almost 60% of Americans begs the question: Is the liberal “establishment” really that bad?

This is all complicated by the fact that Sanders’s voting record is solidly pro-choice. In 1993 he was one of 142 co-sponsors of the Freedom of Choice Act, which did not pass. He’s repeatedly voted to allow women to travel interstate to get abortions, to provide federal funding for organizations that provide abortions, and to increase access to family planning. He has a 100% voting rating from NARAL, and a 0% voting record from National Right to Life. “We are not returning to the days of back-room abortions, when countless women died or were maimed,” Sanders wrote in a 2012 article on the Huffington Post. “The decision about abortion must remain a decision for the woman, her family and physician to make, not the government.”

So why would Planned Parenthood, Human Rights Campaign and NARAL Pro-Choice America endorse Clinton? Why wouldn’t they just sit on the fence until the general election? “If you have 100 percent Planned Parenthood voting record, 100 percent pro-choice voting record, there are people who are asking, why is the leadership not either supporting Bernie Sanders or why are they, you know, opposing him?” Sanders asked Monday night. What more do they want from him?

Good question, and NARAL had an answer. “Senator Sanders once again highlighted the difference between an ally and a champion,” Kaylie Hanson, NARAL Pro-Choice America National Communications Director, said in a statement about the Town Hall. “His voting record is sufficient, but it doesn’t make him a champion for women. That champion is Hillary.” Cecile Richards has echoed that sentiment: “We have a lot of friends in Congress, but we have one true champion,” she said.

Clinton has championed abortion rights as central theme of her campaign to be the first woman president, while the Sanders campaign has been largely focused on fixing systemic income inequality and campaign finance reform, sometimes at the expense of other priorities. “Once you get off of the social issues—abortion, gay rights, guns—and into the economic issues,” he told Rolling Stone last year, “there is a lot more agreement than the pundits understand.”

That quote—offered early in the campaign—has been widely interpreted to suggest that Sanders has ranked his political priorities, and that “social issues” like abortion could take a backseat in the Bernie revolution. “We can’t afford a Democratic nominee for president who treats abortion rights like an afterthought,” wrote Emily’s List president Stephanie Schriock on Friday. She went on to accuse Sanders of treating reproductive rights like “extra credit,” and noted that Sanders doesn’t mention anything about abortion, contraception, or reproductive care anywhere in his entire health plan.

When CNN’s Chris Cuomo asked Sanders how his presidency would help women as much as Hillary’s would, Sanders answered with a female-friendly variation of his standard stump speech. He mentioned the wage gap, calling it “old-fashioned sexism” before retreating to the familiar territory of wage stagnation and income inequality. “It’s not only women, although it impacts women and women of color even greater, this level of pay inequality,” he said. “We have got to raise the minimum wage in this country to a living wage. That will impact all people.”

Instead of doubling down on issues that specifically relate to women—like abortion, contraception, and equal pay—he uses them to talk about about “establishment” politics or wage stagnation. That approaches “All Lives Matter,” all over again. 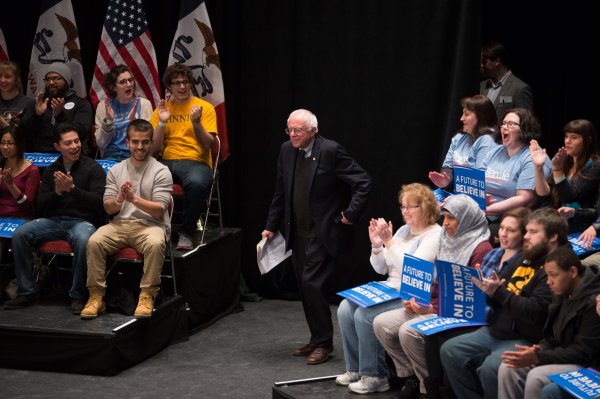