WATERLOO, Iowa — For Ted Cruz, he is the punchline of a joke that begins with Donald Trump’s health care approach. To the influential talking head Glenn Beck, he is an honest “LSD-flashback, sixties socialist.” To Marco Rubio, he is “an excellent candidate for president”—of Sweden. And for early state primary voters, he is an increasing object of fascination.

As Bernie Sanders has risen in polls, the curiosity of a democratic socialist challenging the powerful Clintons has increasingly captured the attention of conservatives. For many voters, the white-haired senator is an easy caricature of the big-spending, big-government, East-Coast liberal. For others, he is the likable and truth-telling foil to Hillary Clinton. And sometimes, he seems more myth than man. “This guy Bernie Sanders? Give me a break,” Donald Trump said at a rally on Sunday Muscatine, IA. “He’s a socialist, but some people say he’s a communist.”

What has become clear is that Republicans just can’t stop talking about him. As part of his recent spat with Trump, Cruz has attacked the billionaire real estate mogul for his previous support of single-payer healthcare. “I will note at least one of the candidates supports Bernie Sanders-style, full socialized medicine,” Cruz told the crowds, referring to Trump.

Sanders name was in the air all across Iowa at Republican rallies and voter meetings nine days before the caucuses. At an endorsement event for Sen. Cruz in the small city of Waterloo on Saturday night, the conservative radio host and television personality Glenn Beck offered an hour-long stemwinder about the decline of the American dream and sang Cruz’s praises. At the halfway mark, Beck gave back-handed praise to Sanders, comparing the Vermont senator and Cruz in style, if not substance. Cruz’s “word is his bond: He says what he means and he means what he says,” Beck told the crowd of the candidate he was endorsing. “On the other side, that’s why I have respect for Bernie Sanders. Bernie Sanders at least comes out and says ‘I’m an LSD flashback sixties socialist. I’m the old hippie that’s still kicking.’”

Sanders’ aides joke that it’s flattering Republicans have started calling him out. They also point out that Sanders won a full quarter of Republican votes in his last Senate election in Vermont. As for the socialism label, Sanders calls himself a democratic socialist, but likens his proposals—universal healthcare, tuition-free public college, and a $1-trillion infrastructure program—to the achievements of of Democratic heroes like Franklin D. Roosevelt and Lyndon B. Johnson, who passed Medicare, Medicaid and Social Security.

Republicans are also playing a clever game: by attacking Sanders, or praising his honesty, they elevate his public image in the race against Hillary Clinton. The Republican National Committee has taken the unusual step of sending out press releases to defend Sanders against Clinton’s attacks. “In A Pitiful Attempt To Attack Sanders, Team Clinton Raised Questions About His Health,” ran one headline from a Republican press release. The SuperPAC American Crossroads, which is affiliated with Republican strategist Karl Rove, has been running a television ad in Iowa that echoes the rhetoric of Sanders, attacking Clinton for threatening to bring “Wall Street to the White House.”

Many Republicans say they see Sanders as a particularly weak rival in a general election. “We’re going to win every state if Bernie Sanders is the nominee,” Ohio Gov. John Kasich said at the last Republican debate. But Trump seemed uncharacteristically hesitant at his Muscatine rally on Sunday to lambast Sanders, saying if Sanders went down, Clinton would have have an easier nominating fight. “I shouldn’t hit him too hard, though, because then he’ll go down,” said Trump. Trump also claimed credit for Sander’s rise in the polls, saying they resulted from Trump’s attacks against Clinton. “Bernie Sanders is surging,” said Trump. “But I did it! I did that.”

In conversations with Iowa Republicans, many express respect for Sanders. He’s honest, said Daniel Hartwig, a pastor in Dysart who supports Cruz. “He knows what he believes and he’s not afraid to say it,” Hartwig said. “I respect him.” Mike Wiseman, a supply chain manager who in the past has supported the libertarians Rand and Ron Paul, said he was considering caucusing for Sanders even though he said there’s a lot of distance between them on fiscal issues. “Bernie has the support of the people,” Wiseman added.

Sanders has long said that he hopes to attract Republican support, particularly from Donald Trump’s voters. “I think for his working class and middle class supporters, I think we can make the case that if we really want to address the issues that people are concerned about,” Sanders said on CBS last month, “we need policies that bring us together.” His campaign in New Hampshire gives canvassers a script specifically for New Hampshire voters who are deciding between Trump and Sanders.

Outside Trump’s Sunday rally, a nurse interested in Trump said that she was in favor of many of Sanders’ proposals, but that he needed to figure out a way to pay for his program. “I like a lot of Bernie Sanders’ ideas,” said Laurie Frantz. “I’m definitely in favor of increasing the amount of money seniors get for social security. Everyone should have free healthcare and free college. I’m in favor, but there’s no plan to pay for it.

For Republican leaders, however, there is little ambiguity. Jeff Kaufmann, the chairman of the Iowa Republican party said shortly before Trump spoke on Thursday that he was tired of hearing Democrats like Bernie Sanders deliver “false promises.”

“Quit throwing out false promises for false policies,” said Kaufmann. “The Democratic party is running a retread from the 90s” between a candidate who is under “serious FBI investigation and an avowed socialist.”

“The headlines,” Kaufmann concluded, “should say ‘Democrats are racing right down the train of socialism.'” 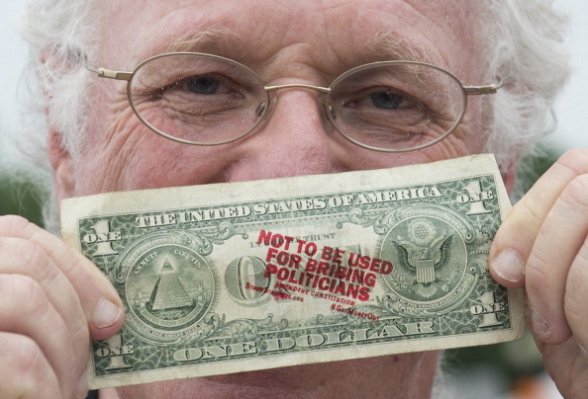 You Could Win a Pint of This Bernie Sanders Ice Cream
Next Up: Editor's Pick