Shaq Surprises Florida Kids With a Game of Pickup Basketball

When Officer Bobby White played basketball with a group of kids on Jan. 15, he told them he’d return with backup. Little did they know that the backup would be Shaquille O’Neal.

A video of White shooting hoops with the group recently went viral when the officer joined the game rather than disbanding it after the Gainesville Police Department received a noise complaint about kids playing too “loudly” in the streets. Shaq was one of the nearly 16 million people who watched the heartwarming clip, and showed up to help make good on White’s promise of a rematch.

Read More: Police Officer Had the Best Response to a Complaint About Kids Playing Basketball

The 7-foot-1 NBA legend played some pick-up with the kids before offering each boy a chance to win $100 if they made one of two shots. After every child sunk the basket, Shaq gathered the group to dole out some advice before handing over the money. “I came out here because I saw the video,” he said. “I’m proud of you guys. Stay out of trouble, listen to your parents, respect your elders and you can be anything you wanna be. I’m from the same neighborhood you’re all from. I grew up just like this. Only you can change this and you change it through basketball and showing respect to your peers like you did.” 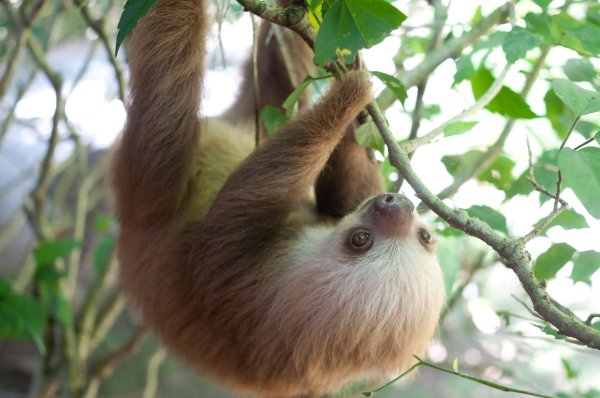 Sloth Gives Up on Crossing Highway and Clings to Pole Instead
Next Up: Editor's Pick