Why Surge in Renewables Investment Is Unrelated to Oil Prices

As Nick Cunningham’s recent post points out, renewable energy had a good year in 2015; in fact, the best year ever. The graphic below comes courtesy of Bloomberg New Energy Finance, a leading light on the matter.

It is possible that a correlation exists between fossil fuel prices and renewables, and that renewables are simply a lagging indicator. In other words, 2016 could see a dramatic fall off in the pace of renewable deployment.

However, that seems like a lousy bet, thanks to the extension of the ITCs in the U.S. and the availability (for now) of virtually free money (i.e. low interest rates) as well as continuous declines in the price of wind and solar electricity. This would not be the first time that a new engine for world growth has emerged from the ashes of a financial market catastrophe. In fact, that is precisely how the forest gets cleared so the next generation of seedlings can have a clear view of the sky. Trees don’t grow to heaven, nor do investments; only hope and, of course, delusions.

When the price of King Cotton collapsed in 1837 (from 30 cents per pound) to the depression low (of 6 cents per pound) in 1843, the new kid on the block was the Railroad. J.P. Morgan’s grandfather was kind enough to pen a rhyme to mark the occasion.

We hear no more the clanging hoof,
And the stage-coach rattling by,
For the steam-king rules the traveled world,
And the old pike’s left to die.

It still took another generation of bad investments and massive losses in “yesterday’s” favorite transport system (canals) before the rails became the new investment standard, but the Rail Index (its echo is now called the Dow Transports) were the place to be for investment bankers, widows and orphans, right up until the next great depression (1893-1896), when two-thirds of the U.S. rails either went out of business or into receivership. The 1896 presidential election saw the rise of William Jennings Bryan, who electrified the faithful during the Democratic convention by clamoring for an end to the deflationary gold standard: “You shall not press down upon the brow of labor this crown of thorns; you shall not crucify mankind upon a cross of gold.”

In fact, they shall, and they did. He is immortalized in American folklore as the Cowardly Lion in the Wizard of Oz (Oz being the abbreviation for an ounce of gold). He never did become King of the Forest, losing two elections to McKinley and another to Taft, but many of his reforms made their way into the New Deal. In fact, early on in the New Deal era, FDR devalued the dollar by changing the cross of gold from $20.67 per ounce to $35. That was a jump of 70 percent for gold. Should we expect gold to rise by a similar amount during the present crisis? It has already been to $1,900. Should you back up your Tesla and fill it with bullion? What about gold shares? (This is grist for another occasion, but it must be thought on.)

During that downturn Henry Ford was busy looking for investors for his horseless carriage, a new technology that would drive the world forward until the collapse of 1929. Like the Dow, auto production that peaked in 1929 did not reach a new high until 1953, when Ike entered the White House and no one doubted where world power resided. The U.S. no longer rules the world alone, and the new sheriff in town has put on enough weight that we must pay attention when he passes by, or stumbles and falls.

Now you may be thinking: “Hold your horses” (if you are old enough to remember that expression), who said anything about a financial catastrophe? So the Chinese market is down about half and the Dow has started 2016 with the worst showing ever, but surely this is just a “buying opportunity.” Surely the Fed (America’s favorite Central Planning agency) was just testing the waters when it raised rates at the end of 2015 for the first time in 9 years. They wouldn’t take away our free money and stop us from speculating in paper assets. The Chinese market’s fall won’t hurt us (will it?). What do their Central Planners know about markets anyway? (It is ironic that capitalist central planners are deemed to be more credible.)

As the above graphic indicates, when major markets have a sudden parabolic rise, the aftermath can be awful, for a long time. The Dow Industrials fell 89 percent before FDR pointed out that fearing fear was a bad strategy. The Nikkei eventually lost 82 percent of its peak value (by March 2009) and still, 26 years later, has yet to find its way back anywhere near the summit. The Nasdaq fell 78 percent from its year 2000 peak and it was just last year when it reached the lofty 5,000 dotcom stratosphere again.

In other words, this pattern is worth studying. The first leg down is usually a 50 percent loss. No one knows why this is so but someday a financial Copernicus may figure it out. Then comes a rally. “Whew, it was only a bad dream, a temporary correction.”
Uh-oh; then comes the real pain, when delusion is blown away by margin calls and, finally, despair, when everyone “knows” that the world has ended and it will never be safe to invest in shares again. That sentiment, by the way, is the buy signal. (The Dow’s second best year ever was 1933, at the turning of the tide. 1915 was the best ever, just after the NYSE had been closed for four months following the outbreak of World War I. Hence the saying: “Buy on the cannons, sell on the trumpets.”)

However, this time we may still be a long way from that glorious moment which provides the single best entry point in your lifetime, if you are ready, if your powder is dry and your morale is intact. That is the hard part. How can everyone else be wrong? Well, even if they aren’t all wrong, as the great John Maynard Keynes supposedly said: “The market can stay irrational longer than you can stay solvent.”

Oilprice.com: Will OPEC Be Forced To Call An Emergency Meeting Soon?

Whether or not this leg down in the markets is the start of an epic fall that will take its place in lore with 1929, or even 2000 (when the world did not end – though it ended for plenty of people between 1929 and 1945), you should be thinking not so much about when to go back in the water, but rather what part of the ocean you want to swim or sail in. And the answer seems clear. Even if fossil fuels weren’t finite, renewables are destined to win the long game; they will even have the next big inning, i.e. the next fifteen years.

If you doubt this proposition consider that Morocco, already the site of Africa’s largest wind array, well situated in the Atlantic tradewinds, has just secured bids on 850 MW at $30 per MWh. It’s the cheapest power on earth, though not quite yet too cheap to meter. Furthermore, even the leading exporters of crude can see the haboob brewing for their product. They are dampening domestic consumption and investing in renewable megawatts. “The initiatives confound the conventional wisdom that low oil prices discourage the transition to renewable energy . . .”

Finally, China, which accounted for a third of all investment in renewables last year, is on the warpath to clear the air, its own air. The ‘price to see’ in China will be highly correlated to the Price of C there. A Carbon Tax may not be a nail in fossil fuels’ coffin, but it may well become the mill that planes the boards used to make that coffin. 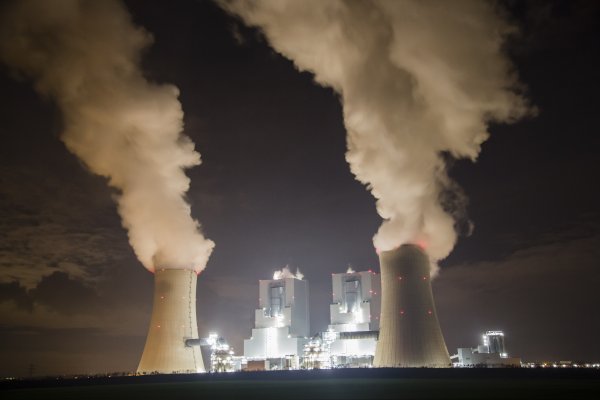 Natural Gas May Have Trumped Coal in 2015, Report Says
Next Up: Editor's Pick