Andie MacDowell is defending herself against social media users after she complained about having to sit in “tourist” class on an American Airlines flight, despite paying for first class.

MacDowell tweeted at the airline on Friday, alongside a photo of her seatmates, that she “paid for first class & they put me in tourist because of my dog that I pre-booked & paid for.”

Immediately, some followers responded with harsh words for the Magic Mike XXL star.

“@AndieMacDowell3 @AmericanAir the horror!!! TOURIST class,” one user wrote. “You shouldn’t be forced to sit with filth. You are above us.”

The 57-year-old went on to explain that she was only upset because a “rude” airline employee would not honor her first class ticket.

McDowell wrote that she simply issued her grievance because she wanted to reimbursed for that part of her trip, and said that “just hate that I paid for what I didn’t get.”

She added on Sunday, “I’m very happy flying in coach I’m happy on a bus or the subway but if I play for first class, that’s where I want to be,that was the point […] Lessons learned never,complain on Twitter & don’t pay for first class on American Airlines, only express gratitude…can we move on now.”

The actress, who was traveling with her rescue dog – the puppy’s first ever flight – said she was “hoping” people would understand the situation.

Retaining a positive attitude throughout the ordeal, MacDowell said, “it was one bad egg who just didn’t want to help…let’s give it to charity this trip is about giving will send that info.”

She also responded to a follower, writing that she hadn’t intended to sound “elitist.”

“That’s not at all how I feel I’m sorry if it sounded that way I’m happy taking a bus and preferred dirt roads it’s the principle,” MacDowell wrote.

MacDowell was traveling to Charleston, South Carolina, for charity work and said she’d like her reimbursed ticket fees to be given to that organization. “It would make me feel good,” she wrote.

Overall, the star said her main issue was the poor “customer service” and that she hopes “the next customer has better experience with that employee.”

She concluded, “No matter who you are it’s nice to be treated kindly when flying & it just depends on the employee if they’re nice or not… Kindness always wins, in the end it’s all that matters.”

A rep for MacDowell did not immediately respond to a request for comment. 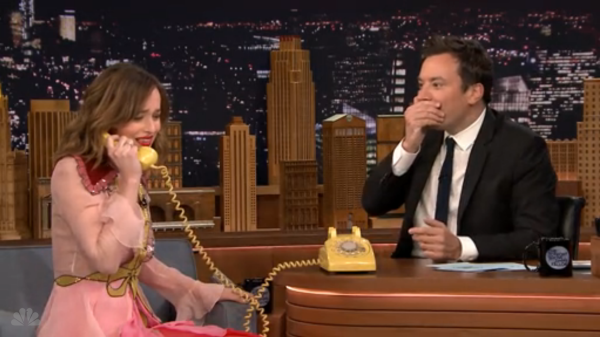 Watch Dakota Johnson Lose It While Teaching Jimmy Fallon a New Game
Next Up: Editor's Pick