This iPhone App Made Me Love Voice Messages Again

If it was socially acceptable, I’d make my outgoing voicemail message simply: “Don’t.” Heck, I hate listening to people’s long-winded rambling so much, I might do it anyway.

I’m not alone in my disdain for people’s vocal brain dumps. In 2014, The New York Times reported on how millennials hate voicemail, and a year later, Forbes covered how companies like Coca-Cola and JPMorgan Chase have dumped it outright. What’s on tap for 2016? If there’s any justice, this will be the year voicemail dies a gruesome death.

But when the programmers behind Spotify put out Roger, an app that’s essentially a user-friendlier way to leave audio messages, it made me wonder if voice messages are as antiquated as I thought. After all, if these guys could foresee the streaming music boom, they probably also know something about voice recordings that I don’t.

Of course, Roger doesn’t bill itself as voicemail. No brand wants to be associated with the stench of that term. Instead, the team likens using the app to walkie-talkie communiques (which are, ironically, even more antiquated). In more modern terms, the app is sort of like that service that Nextel phones used to have, minus the annoyingly loud chirp. (I imagine the Spotify guys’ skin crawling over that metaphor — sorry!)

Branding and comparisons aside, sending and receiving voice messages via Roger is a very smooth experience. Currently only available on iOS, Roger has a simple, uncluttered interface with big buttons, ideal for pressing while you’re on the go.

To connect to the free service, you simply download the app and enter your phone number. That’s it. To add people to talk to using Roger, you tap the “+” button, which connects the app to your iPhone’s contacts, where you can select people. The service then sends them a text message encouraging them to download the app, assuming they don’t already have it.

With a simple, three-button layout, leaving a message is as easy as listening to one. To send someone a Roger, tap on their photo, then tap on the microphone and speak. Just like talking with them face-to-face, there’s no undos or confirmations, nor is there a time limit on how long your message can be. Once you tap the microphone icon again, the app hurtles the message through the Internet, arriving in the recipient’s Roger app.

To listen to a message, you simply put your phone up to your ear with the app open, or to play it over your speakerphone, just tap on their photo. Either way, the high-definition audio is much better than standard cellular service. You can listen again by giving the contact’s photo another tap, but you can’t save the file. Messages are automatically deleted after 48 hours.

Savvy iPhone users might point out that voice messages have existed within iOS’ Messages app for more than a year. But if that’s how they dismiss Roger, they’re missing the point entirely. Firstly, though it’s currently iPhone only, Roger is also in beta for Android. Once it becomes more widely available, it will be a great cross platform communication app.

Meanwhile, Roger’s intuitive nature takes the existing iPhone feature and makes it more usable. Somewhere in the transition from Apple’s older operating systems to the newer “flat” interfaces, the iPhone lost certain bits of utility. Sir Jony Ive’s pursuit of a bare-boned operating system has given apps like Roger the room to grow. So, if Apple wants to relegate a useful feature like voice messaging to the size of a baby aspirin in the corner of an app, that’s its decision, but Roger gives the technology new life.

I used Roger to keep in touch with my wife while I was at CES. In the crowded conference halls and endless running to the next meeting, it was a godsend. Instead of pulling out my iPhone to peck away at text messages, selfishly causing foot traffic to grind to a halt around me, I was able to pull out my phone, talk into Roger, or listen to her messages while watching where I was going. In contrast, to keep up with my co-workers via text messages, Slack, and email, I felt like I was diving from the busy conference aisles into quiet corners, like a real-life version of Crossy Road.

But the true value of voice is in the context it supplies. Sure, texts can be revised until they’re perfect, read whenever they’re needed, and they never disappear. But the sound of someone’s laughter speaks volumes compared to the hollowness of their “lol.”

Just because I used Roger with my wife doesn’t mean that the app is only useful for personal interaction. As an increasing amount of workers begin to work virtually, some level of interpersonal connectedness will only become more important. Every day I communicate with dozens of people who I never speak with, some of whom I work with very closely. And while it’s rare that I have ever have a negative conversation with any of them, the fact that I don’t hear their laugh or can’t make out the exclamation point at the end of their “thanks” makes me feel that deep down they’re unhappy with me. Voice — and voicemail, I guess — is validation, whether we like it, or not. 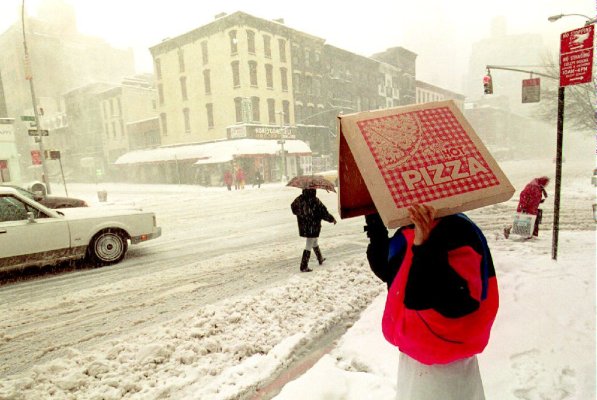 10 Apps to Help You Get Through The Giant Winter Storm Coming to the East Coast
Next Up: Editor's Pick