An American Describes How His Israel Dream Turned to Nightmare

One American described how injustice by police in Israel ended his dream of a Jewish homeland.

Jay Engelmeyer detailed his experience with the Israel Police in a Times of Israel op-ed. He describes how police raided Engelmeyer’s home, roughing up Engelmeyer, his wife and four children in a search for drugs—which the American says they found none of.

For Engelmeyer, the alleged mistreatment, which included a detainment and time on house arrest, by Israel Police caused him to reevaluate his time there. “After ten years of building a life for ourselves, ingraining our family into a community and integrating into Israeli life, one miserable eye-opening day made us question our decision to live out our lives in Zion and take stock as to why we are really here,” he wrote in the blog post.

The Israel Police are counter to police in America, according to Engelmeyer, because the country is involved in a constant conflict—police place security first. Engelmeyer says that without justice, he doesn’t see a future for his family in Israel. “My family might still be here physically, but our aliyah has ended – our hearts, minds and spirits are no longer with Israel,” he said. “Perhaps one day soon our bodies will join them.” 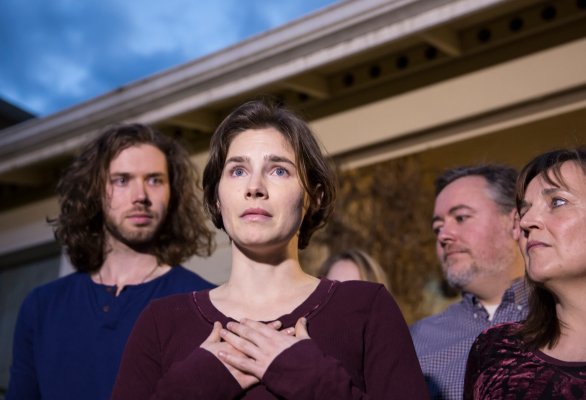 Amanda Knox Was at Scene of Murder Says Killer
Next Up: Editor's Pick