David Douglas Duncan, perhaps the best war photographer of the 20th century, turned 100 on Jan. 23, 2016. From his coverage of the Korean War, which gave birth to the celebrated book This Is War!, to his intimate documentation of Pablo Picasso, Duncan has influenced generations of photographers.

I have known and admired David Douglas Duncan since one day in late 1940 when he came to show his work to my boss Wilson Hicks at LIFE magazine. My job was to be the first interviewer of the countless photographers who came to show their work. Duncan’s work was so good that I went immediately to Hicks’ secretary Peggy Matsui to ask her to get Duncan into Hicks’ office as soon as possible. She did. The whole incident was so fast that Duncan has no memory of it. Alas. He loves to boast that he has 10 months seniority. We had fun together on the dais of a panel discussion in Perpignan several years ago when he had to acknowledge that I could take fairly decent pictures. Happy birthday, David!

In 1957, I turned down a staff photographer job with National Geographic for a chance to freelance for LIFE. Working for LIFE was a childhood dream that was fueled by the great photographs LIFE published that were taken by the world’s greatest photographers. David Duncan was high on that list and meeting him for the first time in New York was like meeting a God. He went out of his way to talk with me and finally said, “you got a minute? I have a place I want to show you.” We walked out of 9 Rockefeller Plaza, LIFE’s HQ in those days, and headed East. Next thing I knew we were sitting at a counter. This might have been Schrafft’s. David ordered. Two large thick drinks arrived. “There!” David said. “That’s the best chocolate malt in New York!” Wishing you a Happy Birthday Maestro, and many returns.

Bobbi Baker-Burrows, a former director of photography at LIFE

Almost 50 years and only half his life ago, a dashing Marine ­then, now and always, seemed to step out of Vietnam and directly into the photo department at LIFE magazine in New York. David Douglas Duncan, the signature photographer of the Korean War, chronicler and friend of Picasso, and at that moment a fatigues-clad photographer with film in hand and the mud of Khe Sanh still on his boots, befriended a young researcher. He remains part of my family. The awe I experienced then, at the beginning of my career, has only grown. The range of David’s work, displayed in LIFE and in so many books, often autobiographical, is a
grand tour of his century, our history and our times.

I’ve known David even longer than Bobbi has known him, and much longer than I have known her! Just as with so many other photographers – Gene Smith, Gordon Parks, Eliot Elisofon, Loomis Dean ­– being the son of a photographer, brought me into contact with David long before I could appreciate his work. But he, and the others were impressive presences. And spectacular storytellers. The readers of LIFE, in truth, the “consumers” of the news in all media, see or hear only part of the story. There is so much more that photographers and reporters have to tell, but it is frequently told to each other. I was fortunate enough to be able to listen in, and David told great stories. My sense of Palestine in the late 1940s is courtesy of DDD. I know something about the art in the Kremlin because he photographed it (and my father didn’t). Even in reliving his experiences in Vietnam, a country and a war with which I have a strong emotional connection, I can admire his stories.

Bobbi and I speak to David at least once a week, and he listens as intently as he speaks. A month or so ago, I made reference to something he had mentioned about the founding of Israel, at least it was what I had understood. “Now, hold on a moment,” he commanded. “This is what happened…”

David Douglas Duncan is still one of my heroes. He brought something different to war reporting during the Korean War. Every single generation of war photographers were inspired by his work, in Vietnam and beyond. Even some cinematographer were inspired by his sense of framing, shamelessly, without ever crediting him. He created a new way of covering politics, as well, with Self-Portrait USA. Here again, many photographers owe him a lot. His relationship with Pablo Picasso will, forever, be an example for many of us.

We often celebrate new-found “images” from this or that photographer, but DDD has never received the recognition he truly deserves. I’m proud and happy to say that I love him and I wish him a very, very happy century!

What defines a hero? A dictionary definition suggests, ‘a man of distinguished courage or ability, admired for his brave deeds and noble qualities.’ I would agree with all of that, but I would like to add another trait, humility. I met DDD, a personal hero, at an event many years ago and we were discussing the effectiveness of photojournalism as an agent of change. I mentioned that Don McCullin, another personal hero, once told me that he honestly felt that nothing he produced had made one Iota of change, which I disagreed with, as he paved the way for at least one generation of photojournalists, if not two.

David recounted the story of Don taking pictures of a dying Cambodian soldier being transported away for the battlefield, whilst Don himself had been hit by shrapnel. “He continued to take pictures despite his injuries,” he said as he looked me in the eye, raise a pointed finger to me and said. “Don McCullin – now there’s a Man.” I related this story to Don some weeks later who smiled and said, “Typical of such a real hero to be so modest to tell stories of others.”

David is extraordinary, not just because he has reached the elite club of centenarians, but because he has influenced so many with his remarkable imagery, dedication and humility. Now there’s a Man.

I grew up on the photographs of David Douglas Duncan—his pictures, and those of Gordon Parks, Alfred Eisenstaedt, George Silk, Martha Holmes, Carl Mydans, Ralph Morse, Paul Schutzer, Nina Leen, later John Loengard and Henry Groskinsky and Bill Eppridge and others, the LIFE all-stars of the 1950s and ‘60s. As a kid, I hadn’t paid any attention to the credit lines. But at this point, upon happily joining LIFE from Sports Illustrated in 1990, I knew who these folks were, and, for me, getting to know Gordon and Eisie and Martha and Dvid and others was like meeting the Beatles.

David seemed shy, and this assessment, viewed these years later, can be adjudged vastly incorrect. He wasn’t shy but polite and altogether proper. Extremely friendly, too. I flashed to his Korean War and other famous photos and tried to reconcile, as I did with Carl’s pictures of World War II after getting to know him a little. These seemed altogether sweet men, yet their often-tough photojournalism cut right to the heart of the matter.

David cares about others more than himself, and cares about the pictures he has made. I thought I was beyond being surprised by David when, last year, we were working on a book about Vietnam. We found a photo essay from the 1950s about the French involvement there, which predated the American quagmire by a few years, indicating that the situation there was beyond problematical, even beyond dire or redemption. I had been unaware of the article, which was not only shot but also reported by Duncan. We would run a bunch of pictures in our book, of course, and for background I talked to David about the prescience of the piece. He said, with his good humor, that it nearly got him canned. Time Inc. boss Henry Luce was all for Asian interventions of any sort, and when the French ambassador protested to him about the feature, Luce called Duncan on the carpet. After Luce fulminated for a bit during this private audience, Duncan said the boss obviously had one option: “Fire me.” Luce, a smart editor, chose not to.

That is David, too: tough and principled and clear-eyed. This sweet guy is very proud of having been a Marine, and once told me that this was why so many of his war photos were from the front, and often taken in places where he was a lone journalist among the troops. He was comfortable there. And he was just as comfortable with friends in quieter realms, be they great figures like Picasso or unknown folk.

We who know David are not only in awe of him, but love him.

The #Dysturb collective pastes one of David Douglas Duncan's photographs on a street of Paris to celebrate the photographer's 100th birthday.
Benjamin Girette—IP3

Liz Ronk is the History Photo Editor for TIME and LIFE. 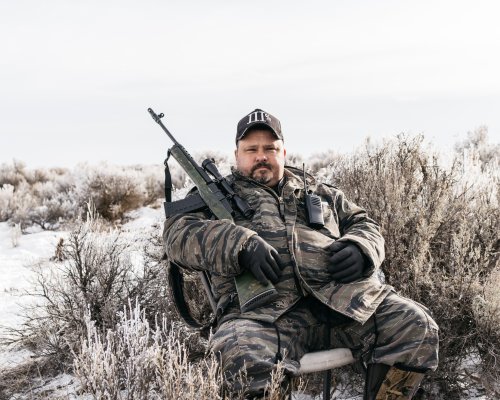 Inside the Oregon Standoff
Next Up: Editor's Pick