Former President Ronald Reagan surrounded by members of his senior staff as he watches a TV replay of the explosion of the Challenger space shuttle at the White House in Washington, DC on Feb. 3, 1986.
Craig Fujii—AP
By Lily Rothman

Even at the White House, they watched it first on TV.

When the Space Shuttle Challenger exploded 30 years ago—on Jan. 28, 1986—and killed the six crew members and one schoolteacher on board, the shocking tragedy transfixed the nation as it was replayed on televisions from coast to coast. ”We all shared in this experience in an instantaneous way because of television,” the late news anchor Peter Jennings was quoted saying shortly afterward. ”I can’t recall any time or crisis in history when television has had such an impact.”

Countless cameras were trained at what was meant to be a joyous if routine event, but only CNN—then young enough to be identified by TIME as Cable News Network—was carrying live coverage of the liftoff and subsequent explosion. The broadcast networks devoted much of the rest of the day to the disaster, but they relied on replays and commentary to fill time in an absence of both information and original footage. As a result, television served as a way to collectively process something that had, until that morning, seemed unimaginable.

Fittingly, the culmination of that day of coming to grips also took place on television. Though few people actually watched the shuttle launch live, President Ronald Reagan’s afternoon address was broadcast in real time. With a huge audience tuned-in, Reagan’s speech “offered both a sense of climax and of closure,” as Ben Lerner put it in his 2014 novel 10:04.

Reagan had been meant to deliver his State of the Union address, and had been getting ready to talk to network news correspondents about the speech when he was told what had happened. Though the president initially planned to merely add a mention of the Challenger to his remarks, he was encouraged by advisers to postpone the State of the Union and instead deliver a tribute speech. That address, particularly its closing paraphrase of the poet John Gillespie Magee, would become one of the most significant of his career. “We will never forget them, nor the last time we saw them, this morning,” he said, “as they prepared for the journey and waved goodbye and ‘slipped the surly bonds of earth’ to ‘touch the face of God.'” 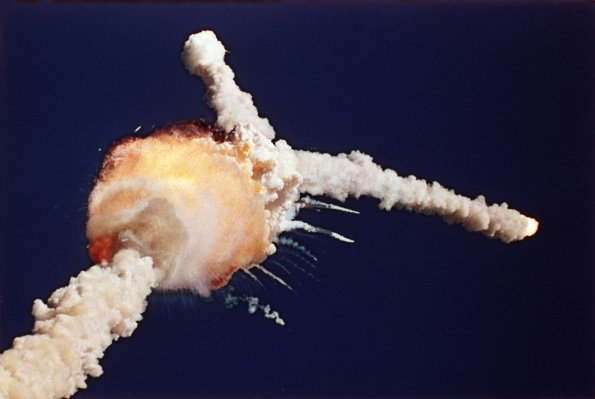 Challenger: The Science of a Space Shuttle Disaster
Next Up: Editor's Pick