Filmmaker Michael Moore attends the Centerpiece Gala premiere of Dog Eat Dog Films' 'Where To Invade Next' in Hollywood on Nov. 7, 2015.
Imeh Akpanudosen—Getty Images
Ideas
By Michael Moore
Moore is a filmmaker whose work includes Roger & Me, a 1989 documentary about Flint

The people of my hometown, Flint, Mich., are being poisoned. Let me not mince words: This is a racial crime. If it were happening in another country, we’d call it an ethnic cleansing. Flint is a very poor, majority African-American city, and the Republican governor of Michigan, Rick Snyder, knows they have no political power, no lobbyists, no money. And they didn’t vote for him. So when the residents of Flint, many of whom work two or three jobs for minimum wage, complained about the levels of lead in their water and told the governor their children were getting sick—two years ago!—he didn’t have to listen.

Everybody knows that this would not have happened in predominantly white Michigan cities like West Bloomfield, or Grosse Pointe, or Ann Arbor. Everybody knows that if there had been two years of taxpayer complaints, and then a year of warnings from scientists and doctors, this would have been fixed in those towns.

This started when the governor turned Flint’s authority over to an “emergency manager,” ostensibly to fix the city’s finances. In order to save a few million dollars, the manager and the governor’s office came up with the bright idea to unhook the city’s water supply from Lake Huron and tap into the Flint River.

In the 20th century, General Motors made Flint the ultimate company town, and over the next 100 years the Flint River was turned into a sewer. Environmental experts warned the political leaders of the dangers of using the Flint River as a water source. They didn’t listen.

So here we are. People need to stop saying that Flint was using Detroit’s water. It was pure water from Lake Huron, the third largest body of freshwater in the world. A toxic water crisis is the last thing that should happen here.

The American middle class was built in Flint. Our grandparents knew that if they worked hard and the company prospered, they prospered. That was the American Dream, and it spread from Flint to the rest of the nation. Then around 1980, General Motors, a company that was making billions, figured out that it could make even more money by sending jobs to the nonunion South or overseas. This halved Flint’s population and brought along unemployment, poverty, alcoholism, broken families and other ills. The crime rate skyrocketed. Wall Street came in and cut Flint’s credit rating, making it impossible for Flint to recover, to attract jobs, to fix its infrastructure and schools. Flint went through a three-decade economic and social assault. Those who could get off the sinking ship—myself included—escaped. And those who were abandoned and left behind? They got their water poisoned. And when the governor found out, he kept quiet and let the poor of Flint continue drinking the poison. Marie Antoinette would’ve been proud. Except this time, no one offered any cake. “Let them drink the Flint River” has such a nice ring.

Moore is a filmmaker whose work includes Roger & Me, a 1989 documentary about Flint 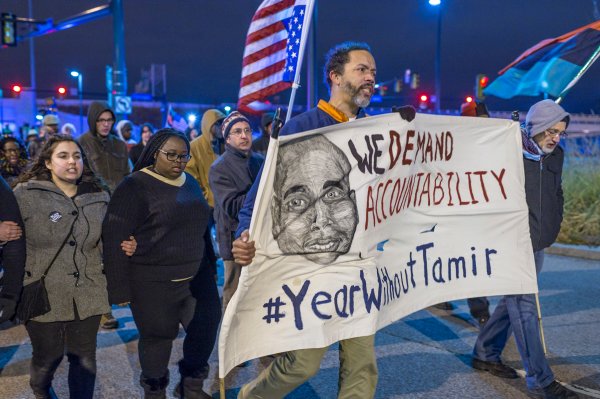 The Bundys and Tamir Rice Are Proof of Two Americas
Next Up: Editor's Pick