Andrew Zimmern Explains How to Acquire a Taste

A lot of times, people ask me how to acquire a taste because they want to learn how to like kale—or, even more commonly, they want to find out how to get their kids to like healthy foods. The truth is that we’re not genetically predisposed to dislike certain foods. In fact, we’re predisposed to like the majority of them (with the exceptions being bitter and ammoniated things because they can be hallmarks of spoilage or something that’s not necessarily safe). The problem comes with the messages our culture gives us about certain foods.

Take, for example, my son, who’s always eaten whatever my wife and I offer him—including bugs. One day, I was out in the garden turning over a stone, and there were these big earthworms. I looked at my son, Noah, who was about 3 or 4 at the time, and said, “Do you want to eat one?” (he always loves eating things out in the wild with me). He said, “Oh, you can’t eat worms—they’re gross.” I had never heard those words before because we don’t use them around him.

Turns out, he had a children’s book with a page that says, “Candy is yummy, but worms are yucky.” He got that message from a book that he’d probably had read to him only a handful of times, but it imprinted on his brain that that particular food was yucky. This is a kid who’s eaten bats with me, dung beetles. You name it, he ate it. But he wouldn’t eat worms because he had gotten the cultural message that somehow that worm was yucky. Which goes to show you the power of culture.

Here in America, we have a really, really, really messed up view about food because we’re spoiled and we live in the most profoundly fast-moving, convenience-based culture on planet Earth. What you eat and how you eat it is a very important part of your healthy lifestyle, and in a lot of cultures, they eat and drink a whole variety of things not for pleasure, but for wellness. And they’ve ended up developing or acquiring tastes for nutritious foods.

Acquiring new tastes isn’t just important for your health, though. If we keep eating the same 15 vegetables, the same four meats and the same three fish, we’re going to create more of an extinctive forecast for ourselves than we’re already dealing with. So instead, we have to learn to eat little fish with the heads on them from local fishermen (you can always take the head off if you want). We have to learn to eat sea vegetables of all varieties and to eat a greater roster of vegetables, including the ones that are sometimes bitter or sometimes have an odd texture. Not only is this something that we can really work at as a culture, but it’s vital if we’re going to survive and cultivate a healthy food system.

So how do you acquire a taste for a new food? Here are a few suggestions:

Try new foods multiple times. A 2010 study found that children who tried a vegetable they didn’t like eight or nine times began to like it more. I believe this to be true, assuming the food is cooked the right way. (Keep reading for more on this.)

Try new preparation methods inspired by different cultures. Looking elsewhere for ways in which we might enjoy a food is, I think, a really, really important skill. One of the most popular preparations for kale, for example, is the European model: Pick the kale younger, julienne it needle-thin, rub it with lemon juice and olive oil so it starts to break down, and toss it with some lemon juice, salt and Parmesan cheese.

When in doubt, use a touch of fat, sugar and salt. These ingredients have become the sex lube of our culinary generation. It’s kind of awful. But I’m not entirely opposed to the sugar-fat-salt trick; I just think it needs to be used very, very prudently. My son at one point didn’t like Brussels sprouts. I roasted them in the oven and then quickly flash-sautéed them in a pan with a tablespoon or so of butter, a tablespoon or so of brown sugar and a couple of splashes of fish sauce. The combination of butter, brown sugar and fish sauce wasn’t unhealthy spread out over the pound and a half of Brussels sprouts I had in the sauté pan, and my son liked it.

It’s O.K. to not like certain foods. I don’t eat raw cookie dough—there’s something about the texture. Everyone gets to not like something. I don’t like walnuts even they’re one of the most popular nuts in the world. I just don’t care for them, but I like lots of other nuts. We need to be O.K. with not liking things, but we really need to insist on widening our dietary choices and the global buffet from which we eat if we’re going to have food available for future generations. To do that, we’re going to need to acquire a taste for foods right now we might not like. 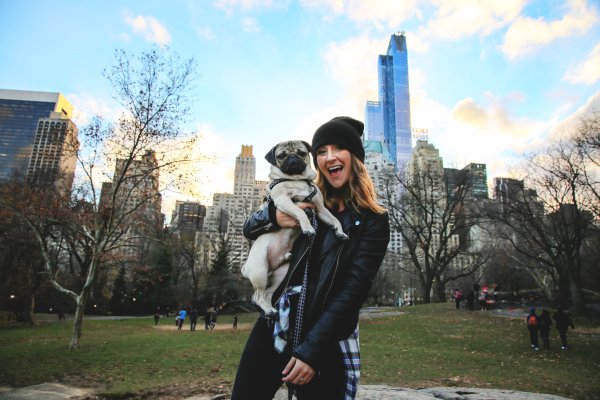 Doug The Pug's Owner: How I Went From Assistant to Full-Time Dog Momager
Next Up: Editor's Pick