The Diversity Problem at the Oscars Starts at the Top

The Academy of Motion Pictures Arts and Sciences Board of Governors is seen here, with the exception of Daniel R. Fellman and Bob Rogers, for whom photos could not be found.
Getty Images; Illustration by Kenneth Bachor for TIME
By Eliza Berman

Since the 2016 Oscar nominations were announced on Jan. 14, the Academy of Motion Picture Arts and Sciences has been repeatedly called out for the lack of diversity among its nominees. All 20 acting nominations went to white actors and actresses, continuing a pattern of underrepresentation of minorities that can be traced to the Oscars’ roots.

The lack of diversity, though troubling, is not entirely surprising when taking into account that the Academy is 94% white, according to the Los Angeles Times. But of its 6,000-plus members, the ones that wield the most power are members of the Board of Governors, who oversee the Academy’s strategic planning and finances and approve all nominations for membership. The Board consists of three members from each of the Academy’s 17 branches—actors (like Tom Hanks), directors (like Kathryn Bigelow), executives (like Amy Pascal), etc.—elected to three-year terms.

As this composite image of board members shows, all but two of the 51 members—Academy President Cheryl Boone Isaacs and cinematographer Daryn Okada—are white. A push for diversity in Academy member recruitment, as Boone Isaacs has hinted is key to addressing the current situation, will likely have a similar impact on board membership as it does on future nominees. After all, the same Academy members who vote to nominate performers for Oscars vote to nominate the members of the Board to represent their branches.

Earlier this week, Boone Isaacs issued a statement declaring that the effects of recent efforts to diversify the Academy’s ranks are “not coming as fast as we would like.” She added that the organization will soon conduct a review of its recruitment practices to ensure “much-needed diversity in our 2016 class and beyond.” 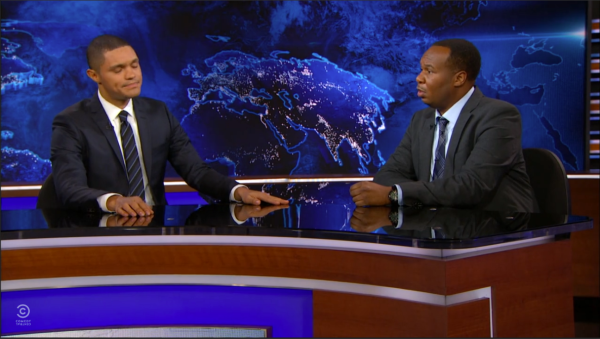 Allow the The Daily Show to Explain Why the Oscar Nominees Are So White
Next Up: Editor's Pick