The question of how we should commemorate the concentration camps is a live one. On a bitterly cold day in November I took the train from Berlin to Fürstenburg, a village to the north, where women destined for Ravensbrück were let out of their overcrowded cattle trucks to be marched to the camp itself.

Some French resisters, sent there as late as summer 1944, had endured months in other prisons and thought the new camp might at least offer them a chance to work outside, a hope they grasped on arrival as they smelled the salty Baltic air. But, as Jacqueline d’Alincourt wrote, they were soon disabused of this notion: ‘We were forced to step out amid the yelling of guards accompanied by their dogs, tugging at their leashes, showing their fangs. Fists rained down upon us.’

The camp location, amid forests and lakes, was chosen by Heinrich Himmler because it was far enough away for people not to know about it, yet within reach of the railway station at Fürstenburg, which, then as now, had a direct link to Berlin. Built in 1939 as the only all-women camp, Ravensbrück was intended for social outcasts, gypsies, political dissenters, foreign resisters, the disabled and other ‘inferior beings’. Some 130,000 women from 20 different nationalities passed through it. Around 30,000 to 50,000 people were killed there, yet Ravensbrück was not an extermination camp – only about 10 per cent of its inmates were Jews – rather it was a place of punishment, which provided slave labor to some of the thousands of sub-camps fueling the Nazi war machine, the most notorious being the Siemens and Halske plant.

Among its inmates were Genèvieve de Gaulle, niece of the General, the British Special Operations Executive (SOE) agent Odette Sansom, who later became Odette Churchill, and French ethnographer Germaine Tillion, who composed an opera in the camp based on the story of Orpheus. It was also the scene of horrific medical experimentation on young Polish women, known as ‘lapins’ (guinea pigs), some of whom had their legs cut open and infected with bacteria and glass shards to simulate the effect of shrapnel.

In March 1945, when it was clear the defeat of Nazi Germany was only a matter of time, the Swedish Red Cross sent buses to rescue some prisoners, but Ravensbrück was not liberated by the Red Army until April 30th. After the war the Soviets used the site as an army training camp and, although there is a Soviet-era tank serving as a memorial on the road from Fürstenburg, investigation of what went on there was discouraged once the Iron Curtain descended. Today there is a visitor center and a building known as the Bunker – the prison cells within the camp used for additional punishment and torture – has been refurbished. The crematorium remains untouched.

Overlooking the lake, there is a large sculpture by Will Lammert, Tragende, of an emaciated woman carrying the burden of another human being. Yet, short of forcing all visitors to strip, starve, endure fear and beatings, how can one imagine what it felt like to be here in 1944. On the day I was there the vastness of the empty white Appelplatz was a powerful reminder of just how barren the site is of all signs of humanity. During my visit to Berlin, random questions to young Germans as to what they knew about Ravensbrück, only an hour away, met with vacant stares.

Berlin has done much to draw attention to its Jewish past, with stolperstein plaques embedded in pavements recording former Jewish inhabitants murdered by the Nazis, memorial signposts in the former Jewish quarter and even pictures in some train stations of well-known Jews who once lived in that area. Yet Ravensbrück is little known and not encouraged to be part of any cultural itinerary for tourists. Perhaps that is as it should be, to avoid succumbing to what has been called “holocaust tourism.”

In April 2015, to mark the 70th anniversary of its liberation, 90 former inmates gathered, probably for the last time. Annette Chalut, arrested as a teenager, now 90 and honorary Chair of the International Ravensbrück Committee, said: “Vigilance is our absolute duty. Evil can return at any time, and we are not allowed to forget what happened here.” With those remarks echoing in my head, I emerged from my hotel to see a group of schoolchildren on hands and knees scrubbing the stolperstein with toothbrushes and cleaning fluid. No, they had not been to Ravensbruck, they told me, but they knew of it. “It’s very important to know about your history,” volunteered one of the 14-year-old boys, ‘especially if you are German.’

Anne Sebba‘s next book is Les Parisiennes: How Women Lived, Loved and Died in Paris from 1939-49 (Weidenfeld and Nicolson, 2016). 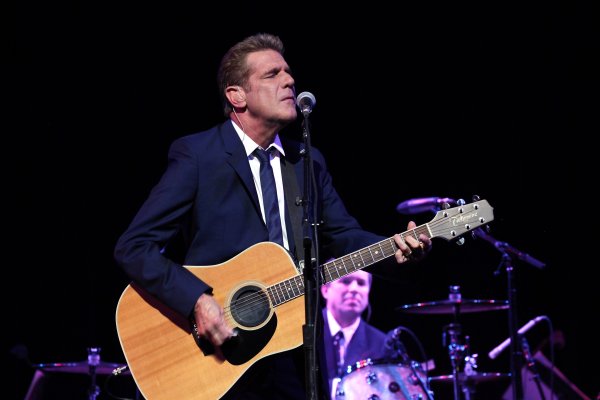 Celebrities Mourn the Death of Eagles Legend Glenn Frey
Next Up: Editor's Pick