In a virtually unprecedented humiliation for a foreign national, a Swedish activist has appeared on Chinese state TV appearing to apologize for hurting “the feelings of the Chinese people” in his work with human-rights lawyers amid a widening crackdown on dissent by the Chinese government.

The Guardian reports that supporters of Peter Dahlin, 35, insist the televised “confession” was scripted and must have been coerced from the Swede, who has reportedly been in China since 2007 supporting the work of local activists.

Xinhua reported on Jan. 13 that Dahlin had been placed under “criminal compulsory measures” on suspicion of endangering state security. In a report on China Central Television on Tuesday, Dahlin gave his apparent confession, in English, to an interviewer.

“I violated China’s law through my activities here,” he says. “I’ve caused harm to the Chinese government. I’ve hurt the feelings of the Chinese people. I apologize sincerely for this and I am very sorry that this ever happened.”

The television report alleges that Dahlin’s nongovernmental organization, the Chinese Urgent Action Working Group was receiving money from overseas organizations and using it to undermine the Chinese state, while Dahlin was also accused of embezzling funds. It featured two anonymized Chinese men who acted as whistleblowers against Dahlin, one calling the legal aid group “a bridgehead set up by anti-Chinese organizations.”

“Actually Peter is a spokesman of the foreign anti-China forces in China. Starting from the cases like land acquisition in civil affairs, instigating and cheating the people, [asking them] to protest against the government,” a man identified only as “Mr. Xing” said.

A colleague of the detained Swede, Michael Caster, told the Guardian that the words used in the confession could not have been Dahlin’s own.

According to the Guardian, the fate of Dahlin’s Chinese girlfriend, Pan Jinling, who was also detained, is unknown.

Televised “confessions” by foreigners are virtually unheard of in China. British risk consultant Peter Humphrey was shown in a prison vest on state-run TV in 2013, accused of illegally obtaining the personal data of Chinese citizens. But his face, unlike Dahlin’s, was digitally masked.

“The fact that they’re doing this to a foreigner is a further marker of the deterioration of the rule of law,” said Willy Lam, a scholar at the Chinese University of Hong Kong. “They’re risking international condemnation, but I think the Chinese don’t care. The senior leadership, and Xi [Jinping] himself, thinks that China is fast becoming a superpower.”

Dahlin appears to have been caught up in the Chinese government’s ongoing campaign against human-rights lawyers and other critics. The crackdown has drawn particular concern in recent weeks as several men linked to a Hong Kong–based publishing house critical of Chinese leaders have disappeared or been detained by Chinese authorities, including Gui Minhai, who is also a Swedish citizen, and British citizen Lee Bo.

With reporting by Yang Siqi / Beijing

Most Popular on TIME
1
Could Amsterdam's New Economic Theory Replace Capitalism?
2
Dutch Police Clash With Anti-Lockdown Protesters
3
It's Not Indulgent to Admit You've Been Struggling in Recent Months. It's Smart to Ask for Help 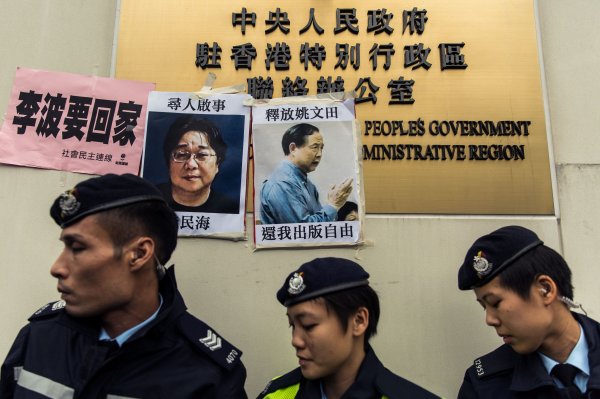 China's Search for Dissidents Expands to Foreign Countries
Next Up: Editor's Pick