Thai authorities say that they are looking into an allegation that Gui Minhai — the Hong Kong-based publisher who vanished from the coastal resort town of Pattaya in October, before reappearing in China on Monday — left Thailand with no official record of his departure.

A spokesperson for the Thai Ministry of Foreign Affairs did not deny a claim that Gui — a Chinese-born Swedish national — never formally left the country, but would only tell the South China Morning Post that they “have to check with the relevant authorities” and that an investigation was in process.

It is speculated that Gui was kidnapped from Thailand by mainland Chinese agents.

According to the Post, the head of the Independent Chinese PEN Center, Bei Ling, citing information given to Gui’s daughter by Swedish officials, said that there is “no record of [Gui] leaving Thailand.”

Gui is a co-owner of Mighty Current Media, a Hong Kong-based publishing company that specializes in books highly critical of Chinese leaders. He went missing from his Pattaya condominium in October before bizarrely appearing on a Chinese government-run television channel on Monday. During his televised appearance he made what seemed to be a scripted and tearful confession of a 2003 fatal drink-driving accident that he supposedly had been responsible for.

The Thai junta has recently helped Beijing enforce its increasingly wide dragnet, having deported more than 100 Uighur Muslims back to China despite the mistreatment they were almost certain to face and, more recently, doing the same to two Chinese dissidents who were awaiting U.N. repatriation to a third country.

Chinese authorities in the southern province of Guangdong meanwhile confirmed Monday that they were holding Gui’s colleague Lee Bo, who disappeared from Hong Kong in January. 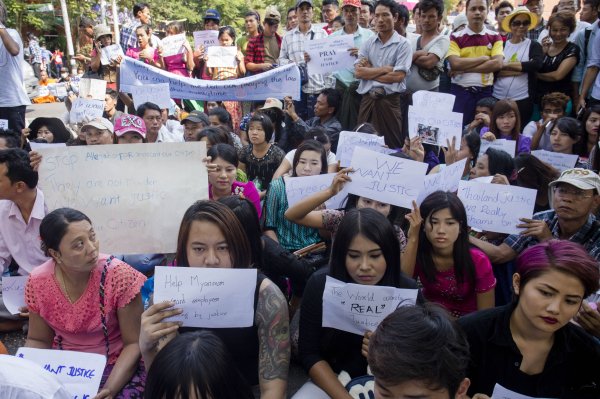