Academy President 'Heartbroken' Over Lack of Diversity at Oscars

Cheryl Boone Isaacs, president of the Academy of Motion Picture Arts and Sciences, issued a lengthy statement today on the lack of diversity in this year’s Oscar nominations, which has become the subject of mounting criticism.

“I’d like to acknowledge the wonderful work of this year’s nominees. While we celebrate their extraordinary achievements, I am both heartbroken and frustrated about the lack of inclusion. This is a difficult but important conversation, and it’s time for big changes.The Academy is taking dramatic steps to alter the makeup of our membership. In the coming days and weeks we will conduct a review of our membership recruitment in order to bring about much-needed diversity in our 2016 class and beyond,” she said in what amounted to a rare and unusual move on the part of the Academy.

“As many of you know,” she continued, “we have implemented changes to diversify our membership in the last four years. But the change is not coming as fast as we would like. We need to do more, and better and more quickly”

“This isn’t unprecedented for the Academy,” she added. “In the ‘60s and ‘70s it was about recruiting younger members to stay vital and relevant. In 2016, the mandate is inclusion in all of its facets: gender, race, ethnicity and sexual orientation. We recognize the very real concerns of our community, and I so appreciate all of you who have reached out to me in our effort to move forward together.”

Speaking to THR earlier Monday evening just before she was honored with the Rosa Parks Humanitarian Award at the King Legacy Awards, presented at the Sheraton Gateway Hotel in Los Angeles, Boone Isaacs said that “there’s been enough conversation” and that it is time for the entertainment industry to take action to improve diversity.

She said that she was “disappointed” that, for the second year in a row, the Oscar nominations, announced last week, failed to include any performers of color. Academy CEO Dawn Hudson, who was also in attendance, added that she was “devastated” by the nominations.

The Academy again finds itself the focus of criticism over the lack of opportunities for minorities within the film industry. Earlier on Monday, Spike Lee, who received an honorary Oscar from the Academy at its Board of Governors Awards in November, announced in an Instagram post that he and his wife Tonya Lewis Lee “cannot support it” and would not attend the upcoming Oscars on Feb. 28.

“Mean No Disrespect To My Friends, Host Chris Rock and Producer Reggie Hudlin, President Isaacs And The Academy,” Lee wrote. “But, How Is It Possible For The 2nd Consecutive Year All 20 Contenders Under The Actor Category Are White? And Let’s Not Even Get IntoThe Other Branches. 40 White Actors In 2 Years And No Flava At All. We Can’t Act?! WTF!!”

The Academy president said she had not heard from Lee about his decision, but that she remained a strong supporter of his in general.

Boone Isaacs, who is African-American, said she herself has experienced racism, but declined to go into detail.

At the same time, she said even if it is the industry that is to blame for not creating more diverse product, it would be wrong for the Academy to avoid responsibility in a year when there has been at least a handful of movies with actors of color that she found worthy of nomination.

‘There’ve been four or five wonderful movies,’ she said, citing Lee’s own Chi-Raq, Concussion, Creed, Beasts of No Nation and Straight Outta Compton. 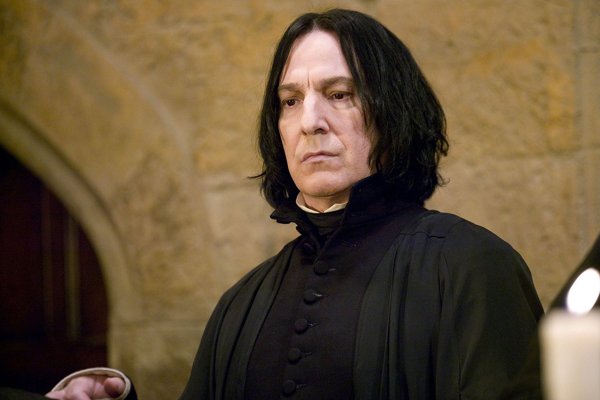 J.K. Rowling Reveals What She Told Alan Rickman About Playing Snape
Next Up: Editor's Pick