Haitian Protesters Demanding Fresh Elections Have Rioted in the Capital

Firefighters hose down a vehicle that was lit on fire during a protest against President Michel Martelly's government to demand the cancellation of the Jan. 24 elections in Port-au-Prince, Haiti, on Jan. 18, 2016
Dieu Nalio Chery—AP
By Nash Jenkins

Thousands of Haitian protesters rioted in the capital Port-au-Prince and elsewhere in the country on Monday against President Michel Martelly and the upcoming election to determine his successor, which they say is rigged in favor of his ruling party.

The protests came six days before the scheduled runoff election between Jovenel Moïse, who is backed by the current government, and opposition candidate Jude Célestin, who has decried the vote as “a selection, not an election.” Moïse and Célestin finished first and second, respectively, in the first round of voting in October, though other candidates accused the government of twisting the data.

Monday’s protesters demanded that Martelly, who has held power since 2011, resign immediately and that an interim government schedule new elections in early February, the Associated Press reports. Authorities presiding over Haiti’s elections — which have historically been known for their volatility — said they would continue with Sunday’s vote as planned. 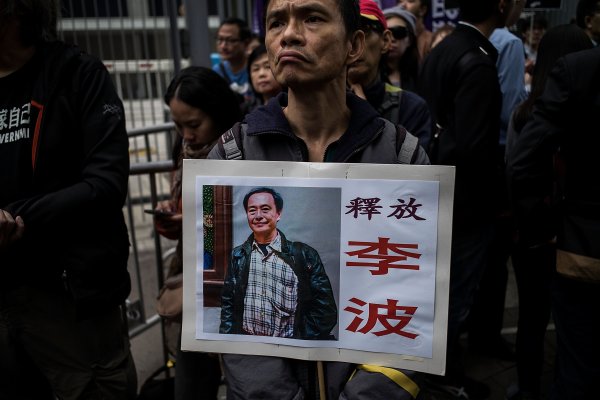 Police Confirm Missing Hong Kong Publisher Is in China
Next Up: Editor's Pick