Israeli settlers protest outside their settlement of Kiryat Arba in the southern West Bank after a suspected Palestinian attacker stabbed to death a woman at her home in the Otniel settlement on January 17, 2016.
MENAHEM KAHANA—AFP/Getty Images
By Rishi Iyengar

An Israeli woman living in the Jewish settlement of Otniel in the West Bank was fatally stabbed on Sunday by an attacker who entered her home, according to the country’s military.

Israeli forces have launched a massive manhunt for the killer of Dafna Meir, a 30-something mother, the BBC reported.

She is among more than two dozen Israelis who have been killed by Palestinians or Israeli Arabs since October, with over 150 Palestinian lives reportedly lost during the same period.

Meir and her husband have four children aged 11 to 17 and foster two more, both under the age of five, according to the Times of Israel. Initial police reports indicate she was killed while struggling with the assailant to defend three of her children, one of whom — a teenage daughter — witnessed the attack. 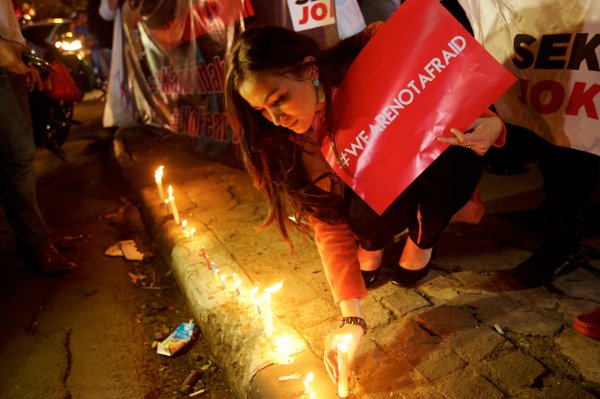 Jakarta Attack Death Toll Rises to 8
Next Up: Editor's Pick