Hillary Clinton and Bernie Sanders spent the fourth Democratic debate swinging at each other on gun control, healthcare, Wall Street regulation and their ability to defeat a Republican in a general election, rehashing disputes that have flared up in recent weeks.

With the first contests of the Democratic primary drawing near and the race tightening, the battle lines were firmly drawn as Clinton, Sanders and Martin O’Malley met on a stage in Charleston on Sunday night.

In the first minutes of the debate—which took place just a short walk from the Emanuel A.M.E. Church, where nine African-Americans were shot and killed in June—Clinton ticked off a list of votes that Sanders has taken that she says reflect his alignment with the gun lobby in Washington, D.C. “He has voted with the NRA numerous times,” Clinton said, targeting her opponent. “He voted against the Brady Bill five times. He voted for what we call the Charleston loophole. He voted for immunity for gun manufacturers.”

And Clinton ribbed Sanders for changing his views on immunity for gun manufacturers. “I am pleased to hear that Sen. Sanders has reversed his position on immunity,” she said.

Sanders struck back, calling Clinton’s attacks unfair, and touted his own record. “I think that what Secretary Clinton says is very disingenuous,” Sanders said. “I have a D-minus rating from the NRA. I stood up to the gun lobby and came out and maintained the position that in this country we should not be selling military-style assault weapons. I have supported from day one instant background checks.”

“This should not be political issue: what we should be doing is working together,” Sanders said.

Read more: The Full Text of the Fourth Democratic Debate in Charleston

The candidates’ discussion of healthcare also turned heated, as Clinton criticized Sanders’ plans for being scattershot and undermining the Affordable Care Act. “When you’re taking about healthcare, the details really matter. We have been raising questions over what the impact would be,” she said.

The three candidates have sparred in past debates, but with the temperature rising and the contenders launching full-frontal attacks against each other regularly on the campaign trail, Sunday night’s contest had a sharper tone.

Sanders slammed Clinton on a line of attack that he has until now not used: the former secretary of state’s hundreds of thousands of dollars in speaking fees from Wall Street institutions. In one answer, Sanders lambasted Wall Street’s power in the country and accused Clinton of being under the industry’s influence.

“Goldman Sachs was recently fined $5 billion,” Sanders said. “Goldman Sachs has given this country two secretaries of the treasury. The leader of Goldman Sachs is a billionaire who comes to Congress who tells us to cut Social Security. You’ve received over $600,000 in speaking fees from Goldman Sachs in one year,” Sanders concluded, turning to Clinton.

Clinton fired back at Sanders, criticizing him for once calling Obama “weak” and “disappointing,” and mentioning Sanders’ call in 2011 to mount a primary challenge against the president. “He’s criticized President Obama for taking money from Wall Street,” Clinton said.

The stakes on Sunday night were high: the debate was the last before the Iowa caucuses, where Sanders and Clinton are locked in a near-even battle to win the first contest in the Democratic primary. The impression the candidates made on Sunday could presage their performance on Feb. 1; the debate was their final chance to reach a national audience before voting begins. 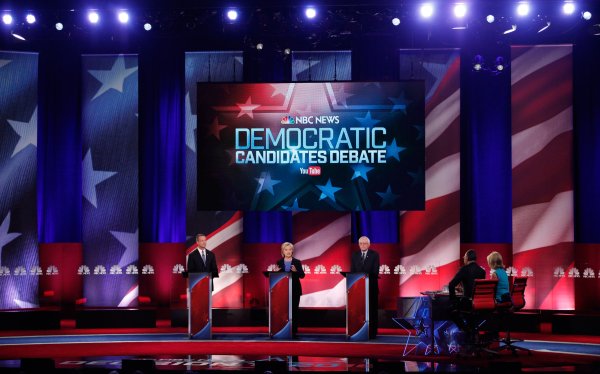 Read the Transcript of the Democratic Debate in Charleston
Next Up: Editor's Pick