What to Know About the U.S. Prisoners Released by Iran

Four dual-national detainees were released from prison in Iran as part of a prisoner exchange on Saturday, according to reports from Iranian media and other outlets. The prisoners were to be flown from Iran to Switzerland on a Swiss plane and then brought to a U.S. military base in Landstuhl, Germany, for medical treatment, the Associated Press reported. A fifth American was also released, separate from the prisoner exchange.

Here’s what to know about the freed prisoners:

The Washington Post’s Iran bureau chief had been held in a prison in Tehran since his arrest in July 2014, according to the Post. His wife, Yeganeh Salehi, also a journalist, was arrested but released on bail. He was convicted of espionage in October after a closed trial. Rezaian’s incarceration was the longest for a Western journalist in Iran since the 1979 revolution, the paper reports.

In April 2015, Rezaian was charged with espionage, collaborating with hostile governments, collecting and distributing information about foreign policies “with malicious intent” and “conducting propaganda against the establishment,” according to the Post. Each covers a maximum prison sentence of 10 to 20 years, but no details about his sentence were made available following his espionage conviction in October.

The former Marine from Flint, Michigan, has been imprisoned in Iran since 2011, according to the website FreeAmir.org. He served in Iraq and was arrested during a trip to Iran to visit his grandmother before beginning school at the University of Michigan, where he intended to study economics. Reuters reports he was initially sentenced to death for spying, but his sentence was commuted to 10 years.

“We thank everyone for your thoughts during this time. There are still many unknowns. At this point, we are hoping and praying for Amir’s long-awaited return,” his family said in a statement on Saturday.

Saeed Abedini, a 35-year-old pastor, has a wife and two young children living in Idaho, according to a petition created for his release. He was detained in July 2012 while visiting family in Tehran and working on an orphanage he planned to build in the country. The Washington Post reports that Abedini, a convert from Islam to Christianity, was jailed for organizing home churches.

His wife, Naghmeh Abedini, told CNN in an interview that she received news of her husband’s release from friends in Iran and then from the U.S. State Department on Saturday morning.

“It’s a great, joyful day. My kids cannot stop just running around and asking me every other second when they will get to hug Daddy,” she said in the interview.

Little is still known about the fourth prisoner, whose identity was initially a source of confusion and whose detention had not been previously reported, according to the U.S. Institute of Peace, a nonpartisan, federally funded organization dedicated to preventing violent conflict. Some outlets named Siamak Namazi as the fourth freed prisoner in early reports, but the semi-official Fars news agency said Namazi remains in jail because “his charges are financial, and not political.”

Naghmeh Abedini told CNN that Khosravi-Roodsari was a businessman

A fifth American who had been detained in Iran, Matthew Trevithick, was also released on Saturday, unrelated to the swap, according to the Associated Press and Reuters.

Trevithick, an American student and researcher, was held in Tehran’s Elvin Prison for 40 days, according to the U.S. Institute of Peace. He traveled to Iran in September for a four-month intensive language program, taking a leave of absence from his work with the Syria Research and Evaluation Organization, which he co-founded.

“We are profoundly grateful to all those who worked for his release and are happy for all the families whose loved ones are also heading home,” his family said in a statement on Saturday. 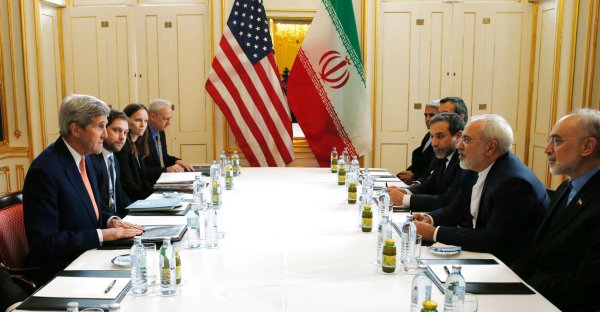 Why Iran Is Being Nicer—for Now
Next Up: Editor's Pick