Donald Trump lost, and won, the latest Republican presidential debate. The nature of his loss was subtle; the nature of his victory was scary. Let’s talk about the loss first. The centerpiece of the debate was his battle with Ted Cruz, in which I suspect Trump was beaten. Cruz simply pulverized him on the nonsense that The Donald has been peddling about Cruz’s Canadian birth. When Trump tried to respond, he was booed, really booed, for the first time in these debates. Cruz is a very strong, and nimble, debater and can handle anything Trump throws at him.

Well, almost anything. Cruz couldn’t handle Trump’s “I love New York” response to his sleazy “New York values” jibe. He even applauded Trump’s celebration of the 9/11 first responders at one point. Many of the pundits—especially those at Fox News—cited this as a clean kill for Trump, perhaps his best moment in any of the debates. But I wonder: Was Cruz playing a deeper game? He had to know Trump’s response was coming—indeed, Trump had already trotted it out in several pre-game interviews. Is it possible Cruz thought that merely getting the New York as Sodom image out there was worth it because of the resonance it has with his evangelical supporters, even though he knew Trump would slash back effectively? Was this a solidify-the-base effort?

After all, the big news of the day was that Cruz’s wife Heidi has been an executive at Goldman, Sachs—Manhattan’s big bad bank. That was the real on-the-ground import of the New York Times story that Cruz had taken a big loan from Goldman to fund his Senate campaign. This was, potentially, lethal mud. The paranoid populist heart of the new GOP believes the party’s biggest problem is that its leadership—its establishment—is in cahoots with big money. Cruz points this out on the stump all the time, and very effectively: There is a tangle of interests that run Washington, the big money guys pay lobbyists—and that’s who the federal government works for, the bankers and lobbyists… and insiders who can get low-interest loans to finance their Senate campaigns. So, perhaps Cruz felt that he had to suffer the 9/11 hit in order reinforce his anti-Sodom bona fides. But make no mistake, we have not heard the last of Heidi Cruz’s career at Goldman.

As for Trump’s victory, it was more zeitgeisty. He has clearly taken control of Republican Party’s tone and soul. His style sets the standard for behavior and we media-bots are playing along. The new gold standard is the over-the-top personal insult. Trump had his “best” debate, many of my fellow pundits concluded, even though he continues to say, and propose, things that are spectacularly at variance with the truth. The notion—which he’s trotted out repeatedly—that the Syrian refugees are mostly big “muscular” guys wasn’t even challenged by Neil Cavuto. (The people who are actually monitoring the refugee flow say it consists mostly of women and children.)

Read More: Are the Syrian Refugees All ‘Young, Strong Men’?

Success in these debates is now measured by how Trump-like, or how boorish, the candidates can be. Cruz was always there. On the stump, he jokes about closing the Department of Education and turning it into the Bill Clinton Museum of Youth Outreach. The two other candidates deemed to have “done well” in the South Carolina debate, Marco Rubio and Chris Christie, are those who have slid toward Trumpery in recent months. Christie got a big roar when he said that they were going to “kick [Obama’s] butt” out of the White House in the fall. Reality check: If Christie wins the presidency, he and Mary Pat will enter the White House awestruck and respectful on the morning of next Jan. 20 for a very polite cup of coffee with Barack and Michelle Obama before traveling to the Capitol to take the oath. I know Christie and like him personally, and it makes me sad to see him bending to the mob in this way.

The three least Trumpitudinous candidates on the stage—Jeb Bush, John Kasich and Ben Carson—were judged to have been losers of the debate. This is sad, too. In a Trumpless world, Kasich and Bush would have been judged in a different way. Both had effective, substantive nights. Both have been excellent governors. Bush still stumbles about on stage; his sword is dull when he attempts to use it—even though he is speaking palpable truth (like the fact that we need Muslim allies in our struggle with the Islamist extremists). Kasich radiates decency without rancor; he does not even come equipped with a pocket-knife. I’ve been watching both of these men on the stump and either one would make me happy, as an American, if he won the nomination. And Kasich does seem to be creeping up in the latest New Hampshire polls. But they are afterthoughts in a Trump-driven marketplace.

As for Carson, one wonders about the impermeable state of his ego: He is making a fool of himself, but doesn’t seem to notice it. He is likely to be humiliated at the ballot box. One wonders why he persists.

Finally, another reality check: The easiest laugh or applause line in these debates inevitably comes at the expense of the President or the Clintons. It should be noted that neither Barack Obama nor Bill Clinton nor Hillary Clinton has ever been beaten by a Republican (outside Arkansas). This seems mystifying, and frustrating, to the GOP’s base, and cause for the most puerile sort of attacks. Let me give the Republicans a hint: Both Obama and the Clintons, especially Bill, came from the moderate wing of their party. Clinton saved the Democrats from 20 years of left-liberal claptrap; Obama followed suit—for starters, Bernie Sanders can tell you how far from socialism Obamacare really is (the individual mandate came out of the Heritage Foundation).

There may be a visceral satisfaction to the biff-and-pow of the Republican debates, but it is not the way to the White House. 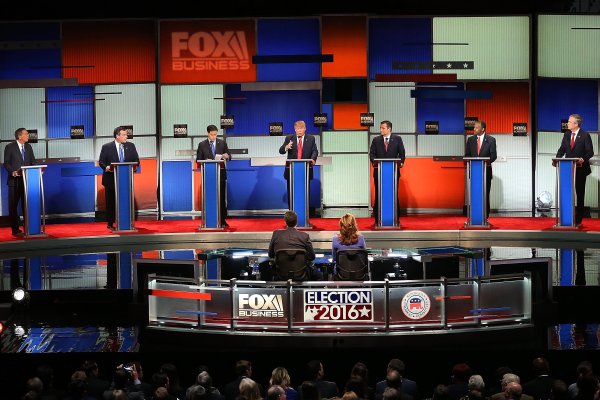 Vote Now: Who Won the Sixth Republican Presidential Debate?
Next Up: Editor's Pick