What Happened at the Republican Debate in Charleston

The Republican Presidential primary took a turn for nasty Thursday night in the first debate of the election year, as personal animosities and political expediency combined for the most intense slug-fest yet. With 17 days remaining until the Iowa caucuses, candidates were feeling the pressure to stand out and score points on their rivals. Six of the seven candidates delivered their best performances of the cycle, but no candidate emerged without scars. The result: a confirmation of the status quo, which only raises the stakes for future contests.

A look at some of the battle lines:

Ted Cruz and Donald Trump: The duo of front-runners (the former in Iowa, the latter in New Hampshire and nationally) squabbled over their constitutional eligibility for the presidency, as well as supposed “New York values.” The citizenship debate featured an entertained Cruz punching back at weeks of Trump speculation that the Canadian-born senator isn’t qualified for the White House by repeating some theories that Trump, as the child of an immigrant, was ineligible as well. Trump repeatedly asserted that he was concerned about Democratic attacks on Cruz, even as he leveled his own accusations. The exchange favored the former collegiate champion debater. Later, Trump gained the best of Cruz by rejecting the telegraphed attack that the former reality star represented “New York values” — a catch-all for his former support of abortion to his multiple marriages. Trump replied by invoking the spirit of the city after September 11, 2001, a response he had workshopped on the road, but Cruz seemed unprepared for. The result of the evening was a wash for the candidates, who will continue to duke it out for first place in Iowa over the coming weeks.

Ted Cruz and Marco Rubio: There has never been much love lost between the pair of freshmen lawmakers, and Rubio came prepared to take on his higher-polling rival. The Florida senator rejected Cruz’s tax plan as a European-style “value-added tax,” and unloaded a litany of attacks on Cruz suggesting he had shifted positions on conservative priorities after Cruz noted Rubio’s leadership on the Gang of Eight immigration reform bill. Rubio bested Cruz on the substance of the attacks, spotlighting his evolution on issues and suggesting he was calculating rather than conservative, but Cruz scored on style, casting Rubio as a typical politician reading from an opposition research book.

Marco Rubio and Chris Christie: Rubio also came prepared to take on Christie’s record, noting his changing positions on gun control, and previous support for Planned Parenthood and the nomination of Sonia Sotomayor. Christie countered that Rubio was doing to him what Jeb had done to Rubio in previous debates, before denying Rubio’s allegations. Later in the debate, Christie forced his way into a Cruz/Rubio battle to criticize the pair for ignoring a question on entitlements, shutting down Rubio who tried to correct his oversight. Christie exposed himself to additional scrutiny by mischaracterizing his record, but mitigated some of the damage with his hard-charging style.

Jeb Bush and Donald Trump: Bush was at his most comfortable when he was criticizing Donald Trump, and used the debate to push back on some of his most controversial proposals including a temporary ban on Muslim visitors to the U.S. and tariffs on Chinese imports. The focus on Trump has given Bush’s lagging campaign new purpose, but he still seemed unable to reply to Trump’s out-of-hand dismissal that he is “weak.”

John Kasich and Ben Carson: They weren’t fighting, but rather in a world of their own. The Ohio governor spent much of the debate in the weeds on trade and economic policy, before making a plea for civility and cooperation in politics—in a year when frustration and anger are what have captured voters’ interests. Carson was irrelevant onstage, drawing confused looks when he turned a question about ISIS into a response about the threat of electro-magnetic pulse weapons and dirty bombs. He also joked he needed a wakeup call when moderators finally came around to asking him a questions.

“I hate to interrupt this episode of Court TV.” — Florida Sen. Marco Rubio to a squabbling Ted Cruz and Donald Trump.

“You already had your chance, Marco—you blew it.” — New Jersey Gov. Chris Christie cutting off a Marco Rubio and Ted Cruz over tax policy

BONUS: “He’s a lot more obsessed with me than I am with him … I’ll run against whoever they nominate but if it’s Donald Trump it’ll be quite the showdown.” — Hillary Clinton on Donald Trump on NBC’s Tonight Show

Watch the Republican Debate in Less Than Four Minutes [TIME]

Some GOP Candidates Seem to Prefer Howitzers to Humiliation [TIME]

What Rand Paul Was Doing During the Republican Debate [TIME] 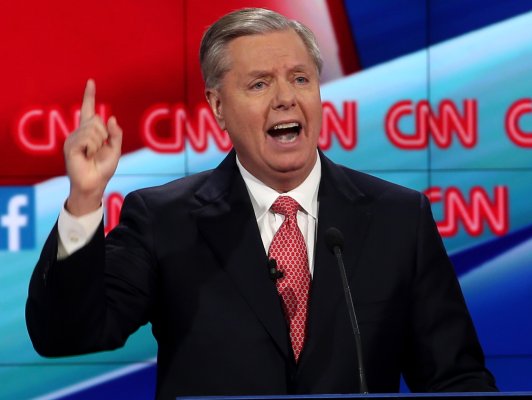