Alan Rickman: A Great Voice, and So Much More

What do you remember about an actor once he’s gone? After you’ve sifted through specific performances and sorted out your favorites, the features that make a performer memorable usually boil down to elemental qualities that can be maddeningly hard to describe. The distinctive, mysterious essence of Alan Rickman, who died early Thursday at age 69, is that voice, a silky tiger’s purr. What a thing to have left behind! Now it hangs in the air like the Cheshire cat’s grin, or, maybe, like the character Rickman played in one of his early (and best loved) film roles, in Anthony Minghella’s Truly, Madly, Deeply, a ghost that doesn’t yet know where to go. No one knows what happens to voices when the people attached to them die, but Rickman’s is the kind you’ll be able to conjure in your mind 20, 30, or 40 years from now, a legacy written in sound waves.

Rickman came to acting late, and came to film acting even later: In his early adult life, he’d worked as a graphic designer. At age 26 he applied to the Royal Academy of Dramatic Art, and he worked in theater and film through much of the 1980s. His first film role, and the one that introduced him to American audiences, was that of the urbane villain Hans Gruber in John McTiernan’s 1988 Die Hard. He was already in his early forties. In a profession where so many people rush to be stars, he had taken his time, and perhaps the film career that flourished from that point was especially rich and varied because of that. Rickman found the sweet spot right between leading man and character actor, and it suited him.

If Rickman’s voice was his most memorable attribute, he also showed us the beauty of the sneer, with the exaltation of the eyeroll close behind. As Hans Gruber, he perfected a cartoon-elegant German accent but also, in the character’s first face-to-face meeting with Bruce Willis’ muscle-bound cop John McClane, affected a comically splendid American twang. His faux innocence in the scene, in which he pretends to be an ordinary businessman as opposed to a Euro-evil mastermind, is part of what makes him such a gloriously memorable villain. He was an Englishman deeply attuned to classic American overfriendliness, and as Gruber, he plucked our eagerness to be liked and trusted like a string on a harp. He wasn’t cruel, just wickedly funny, as if he were teasing out another classic American attribute: our ability to laugh at ourselves.

Not long after that Die Hard debut, audiences saw Rickman in a very different role, one whose memory still elicits a collective swoon from just about everyone who’s seen it. As Jamie, a cellist-ghost who returns to comfort his bereaved girlfriend (played by the superb Juliet Stevenson), Rickman was extraordinary in Truly, Madly, Deeply. This is a movie filled to brimming with tenderness, one of the most beautiful and strangely joyous movies about grief ever made—not least because it reminds us that petty annoyances, as well as grand, overwhelming feelings, are part of the process. The character of Jamie, a vaguely scruffy charmer in a droopy black coat, is a universe away from that of Hans Gruber. In an early scene, he cradles Stevenson in his arms, seemingly as real as flesh and blood. But even when he smiles at her, there’s an aura of sadness about him, an indication that in his new state, he doesn’t quite know where home is anymore—though he does know that it can no longer be with her. She, of course, has missed him so much that she idealizes him. Before long, he starts exerting his will on her and her living space, re-decorating on a whim and turning the heat up way too high. Rickman’s Jamie is impish, not malevolent, and his nettlesome behavior is as essential to the movie as its earlier romantic flourishes are. The performance cuts deep not because it dwells on death and loss, but because it’s layered with all the little things that make up ordinary living. Rickman both dances through the role and makes it believably solid—he’s a ghost so full of light and life and bad habits that he makes you think twice about the idea that you can’t put your arms around a memory.

The list of roles Rickman played is long and all-embracing, from providing the voice of the Blue Caterpillar in Tim Burton’s Alice in Wonderland (as well as in James Bobers’ upcoming Alice Through the Looking Glass) to portraying Ronald Reagan in Lee Daniels’ The Butler. In Dean Parisot’s marvelous 1999 space odyssey Galaxy Quest, he played Alexander Dane, a very serious actor who, to his great annoyance, has been relegated to playing a Spock-like alien on a cult-hit TV show. Forced to wear crazy, corrugated high-forehead makeup, he bemoans his fate: “I was an actor once!” In this performance, Rickman’s eyerolling is particularly spectacular, a mini art form unto itself.

In real life, though, it appears that Rickman was nothing like Alexander Dane. Publicly, he expressed nothing but fondness for the role that made him really famous, particularly with younger audiences. As the seemingly misanthropic, though ultimately heroic, Severus Snape in the eight pictures of the Harry Potter series, Rickman was a tangle of contradictions that weren’t immediately apparent. Mostly, with his lank black hair and wan complexion, he just looked deliciously evil. Striding through the halls of Hogwarts, he was imposing and imperious, his inky black cape floating around him as if it, too, were furious with the world. J.K. Rowling has said that she knew Snape’s story arc from the beginning: She called him “a gift of a character,” and, as it turns out, she got a gift of an actor to play him, too. There’s plenty of eyerolling and sneering in Rickman’s portrayal of Snape, yet ultimately, he pours as much tenderness into the role as he did into that of Truly, Madly, Deeply’s Jamie. Only this time, he played a man soured and twisted by disappointment but ultimately, even so, motivated by love. The sound of Snape’s voice, resonant and beguiling, is a kind of magic charm by itself. It may be the thing you remember. But it’s inseparable, in the end, from the whole spectacular package. 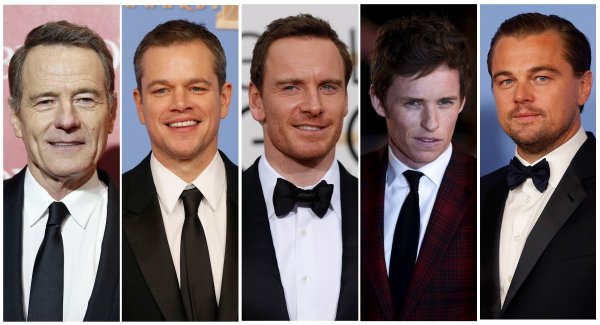 The Oscars Are Very White This Year—Again
Next Up: Editor's Pick