Women Should Not Have to Visit a Doctor for Birth Control

This year marks the first year that women in Oregon—and soon in California—will no longer have to make an appointment with their primary care provider in order to receive a prescription for hormonal birth control pills. They will be able to obtain them directly from their pharmacist.

This is an important step forward in liberating women from the paternalistic policy of essentially making them pay a toll—a doctor’s office visit—for contraception. This added expense and inconvenience drives some women to forgo oral contraceptives and often resort to less desirable methods or no contraception at all. Ironically, emergency contraceptive or “morning after” pills are available over the counter without a prescription.

It would be wrong to blame the medical profession for advocating this policy as a way to generate fees. For years, the American College of Obstetrics and Gynecology has recommended that oral contraceptives be made available over the counter. The college’s Committee on Clinical Gynecology reiterated this position in 2012. And this view is shared by 76% of physicians, according to a 2015 survey by the University of California San Diego and UC San Francisco.

While all over-the-counter medications, from non-steroidal anti-inflammatories to antihistamines to acetaminophen, carry risks of side effects and other dangerous unintended consequences, experience has shown that proper warning and education have worked in minimizing abuse and misuse of these products, and there is no reason to think that the same won’t apply to birth control pills. In fact, the American College of Obstetrics and Gynecology cited, among other studies, a 2006 report from Seattle showing women’s self-evaluation regarding whether or not they should take the pill matched those of doctors about 90% of the time—and that the 10% of the time that they didn’t match was mostly because the women erred on the side of caution.

Many argue that not requiring a doctor’s visit would mean women would not obtain necessary preventative care. But, the American College of Obstetrics and Gynecology states: “Cervical cancer screening or sexually transmitted infection (STI) screening is not required for initiating OC [oral contraceptive] use and should not be used as barriers to access.” In fact, there is currently a debate among gynecologists regarding the need and benefits of annual pap exams.

Besides, this argument is blatantly sexist. Men are not required to get a doctor’s prescription for condoms as a way of making sure they get a prostate exam. Adults are perfectly capable of making their own preventative health decisions, and the American College of Obstetrics and Gynecology concurs with this viewpoint.

In Oregon and California the new laws require women to obtain a prescription from a pharmacist. The pharmacists require the women to fill out a questionnaire and have their blood pressure checked. The Oregon law passed last summer. The California law passed in 2013, but it has taken a while for the various state licensing boards to settle their turf battles and decide upon which and how California pharmacists can prescribe.

While these laws are a big step in the right direction, they don’t go far enough. They only replace one barrier with another. Ideally, women should not need a prescription from a pharmacist for oral contraceptives—just like they don’t need one for the “morning after” pill. But that would require action by the Food and Drug Administration or Congress. Currently, women enjoy that freedom in 102 countries.

It is debatable as to how many unwanted pregnancies would be prevented by making birth control pills available over the counter. What is not debatable is that there will be a lot less spending on unwanted—and unnecessary—visits to the doctor’s office in order to get a prescription.

Bypassing the tollbooth of the doctor’s office is one obvious step we can take to lower health-care spending. 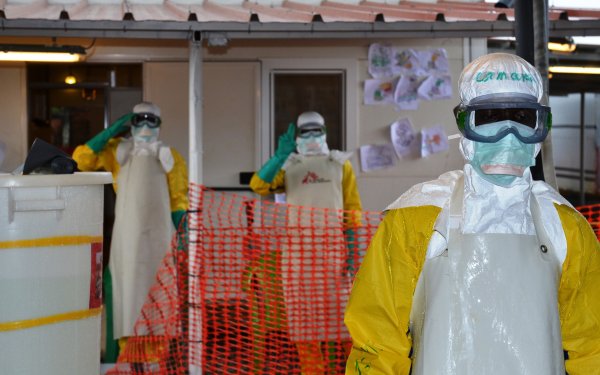 The 'Ebola-Free' Label Could Be Dangerous
Next Up: Editor's Pick