What Obama Gets Wrong About Conflict in the Middle East

President Barack Obama delivers his State of the Union address before a joint session of Congress on Capitol Hill in Washington, D.C., on Jan. 12, 2016.
Evan Vucci — Pool/Getty Images
Ideas
By Doug Bandow
Doug Bandow is a Senior Fellow at the Cato Institute, a former Special Assistant to President Ronald Reagan, and the author and editor of several books, including Foreign Follies.

Chaos and conflict have become constants in the Middle East. Frustrated U.S. policymakers tend to blame ancient history. The latest official to succumb to this temptation was President Barack Obama, who in his State of the Union speech said the region’s ongoing transformation was “rooted in conflicts that date back millennia.”

Of course, war is a constant of human history. That’s certainly the case in the Holy Land: Just read about the many conflicts in the Bible. But these battles among contending empires and kingdoms long ago disappeared into the mists of time. —Nobody today is renewing the quarrels of the Medes, Hittites, Persians, Canaanites and Babylonians.

And while today’s religious divisions—Jewish/Christian/Muslim, Shia/Sunni—may go back thousands of years, bitter sectarian conflict does not. The Christian Crusades and Muslim conquests into Europe ended long ago.

Europe’s Christian kingdoms came to see themselves more as kingdoms than as Christians and fought each other over territory and influence, rather than battled Muslims over faith. The Ottoman Empire acted as a political state, not religious movement, and accommodated rather than killed religious minorities within.

All was not always calm within the region, of course. Sectarian antagonism existed. Yet religious divisions rarely caused the sort of hateful slaughter we see today. For instance, Christianity survived Muslim conquest. Large Christian communities played important roles in present-day Egypt, Iraq, Syria and elsewhere. Christians living under Ottoman rule faced legal disadvantages rather than a sectarian army outside the gates plotting to murder, rape and enslave.

Similarly, not too many years ago, Muslims lived and worshipped together without worrying about which side of the 7th-century Islamic schism their neighbors fell on. Intermarriage was common. Religious tolerance lived on even under political tyranny. The Baathist Party, which ruled Iraq and Syria until recently, was founded by a Christian. Christians played a leading role in the Palestinian movement; Christians still live freely in the West Bank.

The fundamental problem today is politics. Saudi Ihsan Bu-Huleiga, a prominent Saudi Shiite, observed: “The differences between groups in Islam have always existed, but it is only when you mix them with politics that it becomes really dangerous.” Religion has become a means to forge political identities and rally political support. Someone who doesn’t want to fight for the latest dictator may take up arms for God.

Blame is widely shared. Artificial line-drawing by the victorious allies after World War I, notably the Sykes-Picot agreement, created artificial nation states for the benefit of Europeans, not Arabs. Dynasties were created with barely a nod to the desires of subject peoples. The Saudi royals bought internal support by supporting the strict Wahhabist theology at home and abroad, spurring the rise of aggressive, intolerant Islamist movements.

The British- and American-backed overthrow of Iran’s democratic government in 1953 empowered the Shah, an authoritarian, secular-minded modernizer. His rule loosed theocratic currents which a quarter century later yielded the Islamic Revolution and Ayatollah Ruhollah Khomeini, who implemented Islamic rule and denounced the West, Israel and Sunni monarchies. This seminal event greatly sharpened the sectarian divide, which worsened through the Iran-Iraq war and after America’s invasion of Iraq. Out of the latter emerged the Islamic State.

The collapse of Syria’s Bashar al-Assad regime has provided another political opportunity for radical movements which combine sectarian fervor and military effectiveness. Riyadh’s intervention in Yemen turned a mostly tribal and regional conflict into another sectarian battle between Iran and Saudi Arabia. Today the U.S. is involved, through active combat, logistical aid, or financial support, in virtually every Mideast conflict.

Nothing about the history of the Middle East makes conflict inevitable. Indeed, the Ottoman Empire demonstrated religious peace while Europeans were slaughtering each other over the nature of the host in communion. Only recently has sectarianism taken over the region.

To reverse the process both Shiites and Sunnis must reject the attempt of extremists to misuse their faith for political advantage. And Western nations, especially the United States, must stay out of Middle East conflicts. 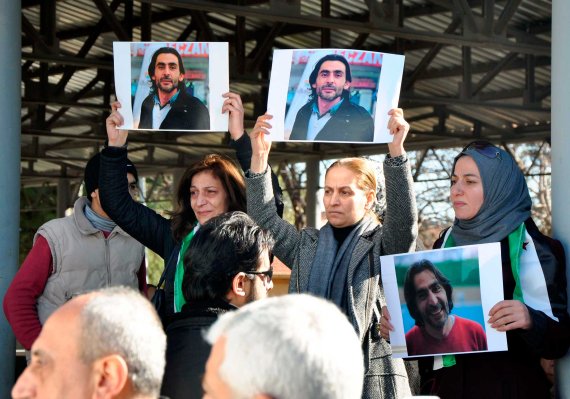 Reporters Covering ISIS Fear for Their Lives
Next Up: Editor's Pick