Alan Rickman’s Snape Is the Professor Who Lived

Harry Potter fans first met Professor Snape in the Great Hall as the “teacher with greasy black hair, a hooked nose and sallow skin.” We loathed him and especially his treatment of our boy wizard. So we rooted for Harry Potter when he crept around Hogwarts after dark, even with the potions professor’s dark shadow looming. And we conspired with Ron, Harry and Hermione as they debated his role in the Order of the Phoenix. But after we learned more about the bullied young man with “cold, black eyes” who longed for Lily Potter, our hearts opened up.

The death of Alan Rickman—who inhabited the character of Snape over eight Potter films—hits especially hard because we’ve already had to say goodbye to Snape once.

Many of us cried at the end of the series, when he offered his tears for Harry to take to the Pensieve, giving Harry—and as such, us—his memories, the truth, about why Snape’s love blinded everything in his wake.

Snape taught readers to think twice. This was evident in the books, but also in the films as Rickman so perfectly captured the terror and mystery of a conflicted villain. Nothing is more frightening than not knowing if you can trust someone, and then learning you were wrong all along. It was from Snape that we learned to see that Albus Dumbledore has flaws, especially when Snape accused him of raising Harry as “a pig for slaughter.”

“Snape didn’t die for ‘ideals,’” she wrote. “He died in an attempt to expiate his own guilt. He could have broken cover at any time to save himself, but he chose not to tell Voldemort that the latter was making a fatal error in targeting Harry. Snape’s silence ensured Harry’s victory.”

Snape’s long-suffering silence also resulted in some of the series’ lighter moments. And Rickman’s multidimensional version of him, the scary tightness at his jaw in the first film when he tells Harry to “turn to page 394,” kept us smiling, because we knew—however much we wanted to pretend otherwise—that there was more to Snape than met the eye.

And, boy did we learn. Rickman’s perfect portrayal of one of the millennial generation’s most loyal and conniving antiheros will keep us forever thinking twice about judging people at first glance. Severus Snape may have died a complicated, misunderstood man whose main legacy lives on in the middle name of one of Harry Potter’s children. But to Potter fanatics who grew up with him on screen, Severus Snape will forever be Alan Rickman, who painted such a vivid picture of what was living in our imaginations. Our children and their children will watch the Potter movies in fear of him, in disgust of him and, eventually, in awe. They’ll turn to us wide-eyed, just as we were when we learned the truth, and say, “After all this time?” 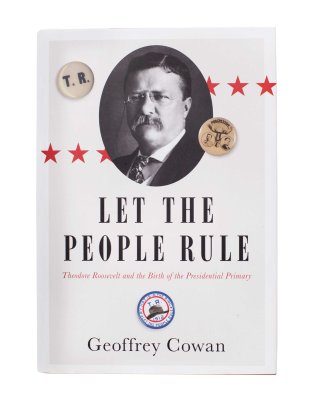 Book Review: Two Roosevelts and a Firebrand
Next Up: Editor's Pick