You Won't Believe How Many Copies Elite Dangerous Has Sold

Games like Minecraft or Grand Theft Auto V, you’ve probably heard, move tens of millions of copies with ease. They’re the olympic idols of interactive entertainment. Most games are lucky to snag much humbler totals. Clearing a mere million copies worldwide if your name isn’t Call of Duty or Battlefield or Mortal Kombat remains a laudable feat.

So it’s kind of a big deal that Elite Dangerous, a hardcore space simulator for PC, Mac, and Xbox One, can now boast 1.4 million copies sold since it rolled out of dry dock in December 2014. That’s according to studio Frontier Developments, whose CEO and industry vet David Braben notes the average player spends 60 hours with the game.

Space sims haven’t been mainstream for decades. The studio carrying the torch until recently was Egosoft, with its impenetrable-to-casual-players X series. Yes, there’s Chris Roberts’ Star Citizen, crowdfunding’s belated Moby Dick, with an over $102 million purse — a world record so far ahead of the next-biggest project it boggles the mind! But it’s still in development, with a release date nowhere in sight, only for Windows and Linux PCs, and who knows if it’ll be worth the wait or all its well-wishers’ pallets of gold when it finally arrives.

To see Elite Dangerous move north of a million units takes me back to the 1990s, when we naively split video games into rote genres: “action,” “adventure,” “strategy,” “roleplaying,” “wargame” and such. “Simulation” used to have its own silo, into which we placed stuff like Microsoft Flight Simulator, Microsoft Space Simulator, Red Baron, the Jane‘s games, IL-2 Sturmovik, and the original Elite. That silo’s still out there, if you follow studios like Eagle Dynamics (the Digital Combat Simulator series) or Laminar Research (X-Plane). But simulations are complex, and vast, and often require boutique peripherals to fully appreciate.

Less so Elite Dangerous. It’s definitely complex, and with its ridiculous boasts of “hundreds of billions” of visitable star systems, vast beyond playable calculation. But you can wing around all that emptiness with a gamepad. It has tutorials (you’d be surprised how many simulations don’t). And it’s as comfortable experienced on a console like the Xbox One as a PC.

And with SteamVR virtual reality support confirmed (HTC’s Vive and Oculus Rift rival arrives in April), it’ll soon let us wrap all that star-flecked interstellar vacuum around our faces, a full 360 degrees. 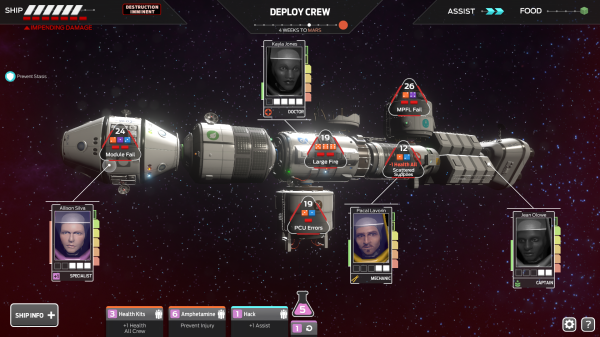 Review: Tharsis Is an Ingenious Space Game That Will Break You
Next Up: Editor's Pick