The Competition for Craft Beer Drinkers Takes a Bitter Turn

The craft beer world is full of nice, easygoing, collaborative entrepreneurs who disdain down-and-dirty competition. Or at least it used to be.

The craft beer business has a reputation as an overwhelmingly friendly, surprisingly collaborative world. It’s assumed that craft beer enthusiasts are “promiscuous”— i.e., they like drinking different brews and hop around from brand to brand. It’s therefore foolish, and perhaps even counterproductive, for any craft brewer to push any customer to be 100% loyal. While it’s acceptable and fairly commonplace to bash Big Beer, especially “crafty” beers like Blue Moon, which are marketed like small brands but are made by the world’s largest brewers, bashing one’s true craft beer competitors is seriously frowned upon. Instead, the overarching theme among craft brewers is that drinkers should be encouraged to buy and taste as much as possible and let the best beer win.

“We don’t worry about competition,” Sam Calagione, founder and president of Dogfish Head—which is certainly in the conversation for America’s best craft brewer—explained to Wired in 2011. “For us, it’s all about collaboration and developing innovative products that the brew-lover will like.”

Jim Koch, the founder of America’s largest craft brewer, the Boston Beer Company (maker of Samuel Adams), is well aware of the craft ethos and has a longstanding reputation as a mentor to aspiring craft beer entrepreneurs. “Jim is the godfather of craft beer, and he’s got unbelievable ideas about what beer can be,” Dogfish Head’s Calagione said in a press release a while back when the two beer innovators partnered to produce a new brew. A year ago, Businessweek reported on the critical role played by Koch and the Boston Beer Company in resuscitating New Albion Ale, one of the country’s first craft beer brands, born in the mid-1970s, long before the craft craze took off.

(MORE: In the Craft Beer World, a Pecking Order Emerges)

There’s no denying that craft brewing is a business—a big one at that. Koch is a billionaire, and some indie labels have sold for over $100 million. Still, competing with one’s craft brew brethren is tricky; one is not supposed to overtly bully bars, restaurants, or distributors or otherwise play hardball to shut out the competition.

At least that’s how things have largely been portrayed during the craft beer boom that’s several years in the making. So it came as somewhat of a shock when one well-known craft brew player recently accused another of specifically targeting its business and trying to replace its brands on tap wherever possible.

Last month, Tony Magee, owner of California‘s Lagunitas Brewing Company, sent out a series of Tweets that took exception to the release and marketing of a new brew that directly encroaches on its turf. The brew in question is Samuel Adams’ Rebel IPA, a “West Coast Style” beer that’s not unlike Lagunitas’s most popular beverage. What’s more, Magee said that Koch and the Boston Beer Company was crossing the unspoken craft brew line by putting Lagunitas and other brands in the crosshairs.

“Learned that SamAdams’ Rebel IPA marketing plans incl specifically targeting our biz as well as other craft IPA. Flattering & sad, it is,” Magee wrote in one Tweet. “BB specifically told our distribs in common that they were going t TAKE r tap handles everywhere they could,” he explained in another. “That’s a directed attack … Imagine someone threatening your children…”

(MORE: Too Much of a Good Thing? Concerns About Craft Beer Saturation)

The Tweets drew coverage on sites like Beer Pulse and kicked off discussions on Reddit and Beer Advocate. Many commenters felt that Magee was having a “tantrum,” and that he was whining about facing the kind of tough, direct, hardnosed competition that every business owner should expect. Others applauded Magee for speaking up, with the idea that all beer lovers have reason to worry about the efforts of the Boston Beer Company and others to squelch out the competition—which could eventually lead to a much less varied, interesting, and tasty beer marketplace.

Eventually, Boston Beer Company’s Jim Koch joined the Beer Advocate discussion, releasing a statement that he took “some offense to Tony’s other jabs and misrepresentations,” and most importantly, he denied that his company’s goal was to replace Lagunitas as a favorite choice of distributors and bars. “We don’t target other craft brewers,” he said. He also insisted that the we’re-all-in-this-together aspect ingrained in the craft beer business is very much alive:

Yet according to Lagunitas’s Magee and others, it’s the actions of Koch and the Boston Beer Company that are destroying the craft beer world’s collaborative, congenial spirit. In any case, it appears as if the competition among craft brewers is bound to get ugly. “F*** them,” Magee Tweeted of Samuel Adams and the Boston Beer Company. “We’re ready. Drink what thrills ya…” 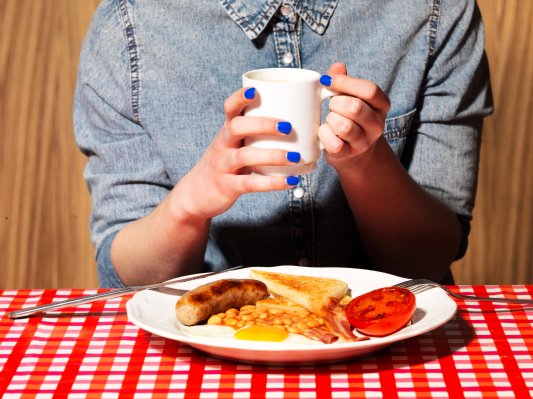 When To Eat Breakfast, Lunch and Dinner
Next Up: Editor's Pick