Iran Releases 10 U.S. Sailors as the Sun Rises Over the Persian Gulf

Iran released 10 U.S. sailors Wednesday who had been detained a day earlier after their two patrol boats drifted near an Iranian military facility on Farsi Island in the middle of the Persian Gulf.

“The sailors departed Farsi Island at 8:43 a.m. (GMT), aboard the two Riverine Command Boats (RCB) that they had been operating when they lost contact with the U.S. Navy,” the U.S. Navy’s 5th Fleet, headquartered in Bahrain, said in a statement. “There are no indications that the Sailors were harmed during their brief detention.”

Navy officials said the small boats drifted close to Iran’s heavily-defended Farsi Island, apparently after one of them had a malfunction on a training mission from Kuwait to Bahrain. The Iranians, who seemed to accept the U.S. explanation, made clear shortly after the sailors were detained, that they would be released at dawn.

Behind the scenes, the Navy was embarrassed by the snafu, and pledged an investigation into how the world’s highest-tech navy could let two of its vessels fall into Iranian hands in the middle of one of the world’s most troubled bodies of water.

Defense Secretary Ashton Carter’s sigh of relief was almost audible in a statement he issued following the sailors’ release. “I am pleased that 10 U.S. Navy sailors have departed Iran and are now back in U.S. hands,” he said, thanking Secretary of State John Kerry for his personal help in freeing the nine male sailors and one female sailor. “Around the world, the U.S. Navy routinely provides assistance to foreign sailors in distress, and we appreciate the timely way in which this situation was resolved.”

Speaking on CBS This Morning, Vice President Joe Biden denied that the U.S. apologized to Iran over the incident.

“There’s nothing to apologize for,” Biden said. “When you have a problem with the boat you apologize the boat had a problem? No, and there was no looking for any apology. This was just standard nautical practice.”

The Navy said the boats, originally intended for use in shallow water and tropical environments, are now conducting “open-sea patrols” in the Persian Gulf “to ensure freedom of movement for strategic shipping and Naval vessels operating in the inshore and coastal areas in the 5th Fleet area of responsibility.”

While the Pentagon cited the sailors’ “brief detention,” and Carter hailed their “swift return,” the timing of their seizure by the Iranians couldn’t have been worse. It came several hours before President Obama delivered his final State of the Union address.

“No nation attacks us directly or our allies because they know that’s the path to ruin,” Obama told Congress in an awkward passage as the 10 U.S. sailors remained in Iranian custody. He limited his comments about Iran to the recently-concluded nuclear deal curbing Iran’s atomic ambitions: “As we speak, Iran has rolled back its nuclear program, shipped out its uranium stockpile, and the world has avoided another war,” he said.

The 38-foot boats traveled more than a mile into Iranian territorial waters near Farsi Island, according to Fars, the Iranian news agency. Members of the Iranian Revolutionary Guards seized GPS gear from the sailors that it said would “prove” the U.S. patrol craft were “trespassing.”

Iran has held foreign sailors for weeks in the past. U.S. officials said their relatively quick release was due, in part, to better diplomatic relations achieved during negotiations for the nuclear accord.

While there have been deadly clashes between the U.S. and Iran over the years, there also have been peaceful resolutions. In 2010, an F-18 pilot from the USS Harry S. Truman spotted an Iranian fishing boat on fire 60 miles north of the ship in the Arabian Sea. The Truman launched a pair of choppers that rescued eight Iranian fishermen shortly after their vessel sunk, and brought them to the carrier for dinner and dry clothes before an Iranian boat came to pick them up. 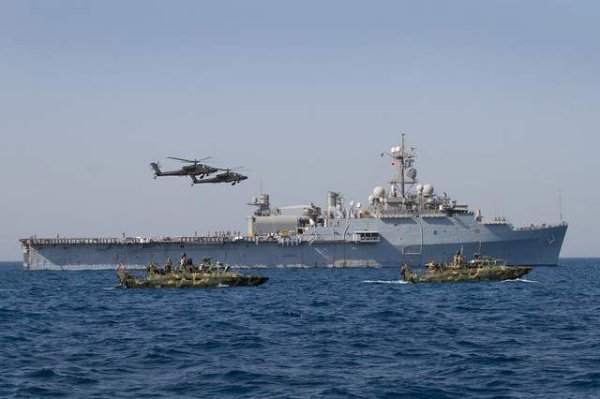 Iran's Seizure of 10 U.S. Sailors Is the Latest In a Series of Confrontations
Next Up: Editor's Pick