The True Story Behind the Benghazi Movie 13 Hours

In Michael Bay’s 13 Hours: The Secret Soldiers of Benghazi, a gang of shouting, masked men storm the American diplomatic compound in Benghazi, fire holes through an American flag and burn the ambassador’s opulent lodging to the ground. Ambassador Chris Stevens is breathing in dangerous amounts of smoke. Our American heroes are just a mile away, armed to the teeth and ready to come to the rescue.

But that’s against orders, according to Bay’s telling. “You will wait,” the pudgy CIA commander tells the armed operatives at the nearby base who are desperate to go help. “Stand down!”

Reports show that the chief CIA commander at the nearby annex in Benghazi did tell the team of American security personnel to wait before rushing to the diplomatic compound. Operatives had “tactical disagreements about the speed with which the team should depart,” according to a House accounting of the incident. But there is no evidence of a “stand down” order that would have stopped American help from reaching the compound. And it’s unclear that any different decisions on the night of September 11, 2012—from the top brass in Washington to the CIA at the annex next door—could have saved the ambassador.

But that’s not really the point. Benghazi, which has become a byword for disaster, was an avoidable tragedy, in Bay’s telling. As the movie shows, security at the diplomatic compound was fatally thin and warning signs went unheeded. While Hillary Clinton’s name is never mentioned in 13 Hours, Bay’s argument is clear enough, and familiar: Clinton’s world of government technocrats and sheltered professionals failed to protect American lives.

The movie debuts at a politically charged moment. Screened first to the public on Tuesday in Dallas, Texas, at the AT&T Stadium, the film anticipates the Iowa caucuses and a contentious 2016 election when Clinton and President Obama’s legacy will be in the hot seat. Indeed, conservatives are already praising the movie for exposing Uncle Sam’s failures to protect his own. Conservative talk radio host Hugh Hewitt said the movie was “an indictment” that “will leave those who will open their eyes and ears to see and hear seething about Hillary’s massive fail that night in 2012.”

13 Hours falls into a tradition of political films that offer an indictment proved by tragedy. Black Hawk Down (2001) showed the deaths of 18 Americans due to a failed 1993 military operation in Somalia during President Bill Clinton’s tenure, while Fahrenheit 9/11 sought to reveal the fecklessness of President George W. Bush’s foreign policy through the debacle of the Iraq War. This year’s Michael Bay movie is the logical endpoint of the trend: it’s a political movie disguised as a drama, and timed to the start of a presidential election.

Criticism of Clinton’s Washington world is implicit in 13 Hours. Our ersatz Hillary Clinton, the CIA officer in charge of the Benghazi intelligence annex on the night of the attack, is clammy and immediately repellant. “We hired the brightest minds from Harvard and Yale to do their work,” the chief tells the contractors on duty. “The best thing you can do is stay out of their way.” Next door, the rough-hewn, non-Ivy League soldiers spend their days lifting weights, drinking beer and video chatting with their kids and wives back home. Their advice is repeatedly ignored. “If you’ve got useful intel, put it in a memo,” says the CIA’s Hillary stand-in. Despite the apparent dangers in Libya, there is little protection.

Once the action begins, the Americans are left high and dry. “The gunship is out of fueling range—that’s what they’re telling me,” says one of the Americans after communicating with headquarters at home. “I called for air support. It never came,” says another. “We don’t have any f–king support!” says one of our American operatives. Flashed images of top brass at home show us just who didn’t send help—even though little top-down wrongdoing is claimed in the film.

Hillary Clinton has accepted responsibility for not arranging for better security in Libya, though she and the rest of the Obama administration have denied intentionally misleading the public in the days after the attack. In the years since, conservatives’ accusations about her mishandling of the crisis have followed her and damaged her standing. Though she was largely considered to have vindicated herself in a hearing in a House hearing in October, Republicans may very well try to use Benghazi again in the coming months.

And if there’s any question that the Bay movie is being used as a political stunt, two Republican groups will host a screening of the movie on Friday in Washington, D.C., and Arkansas Sen. Tom Cotton will speak at the event. Republicans are talking about the potential impact of the movie, which could again help to redefine Benghazi attacks as a moment of failure for Obama and Clinton. “The release of ’13 Hours’ will re-start the conversation over Benghazi and introduce a whole new audience to the events of that night,” Brian O. Walsh, President of Future45, told CNN. “Coming just weeks before the first votes are cast and in the form of a major motion picture from Hollywood, the timing couldn’t be worse for Secretary Clinton.”

13 Hours is likely to be much more popular among conservatives than among the audiences Clinton is trying to woo in the Democratic primary. Whether the movie arouses a latent distrust for Clinton among the voters who matter—that’s a question for Election Day. 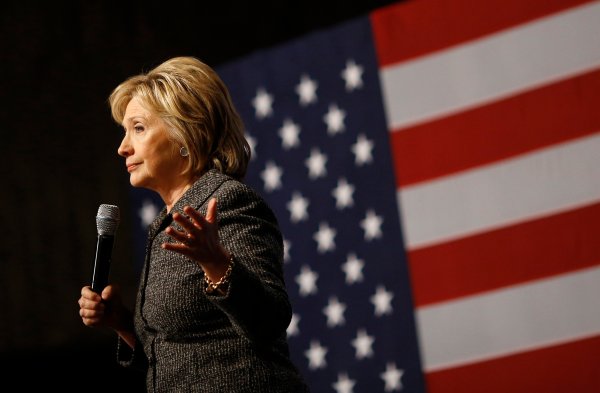 How the 2016 Candidates Would Spend the Powerball Jackpot
Next Up: Editor's Pick