A woman walks past a book featuring a photo of Chinese President Xi Jinping, left, and former Chongqing city party leader Bo Xilai on the cover, at the entrance of the closed Causeway Bay Books shop
Vincent Yu—AP
By Nash Jenkins

According to an op-ed in Hong Kong’s mass market Apple Daily newspaper, cited by the Hong Kong Free Press (HKFP), the chief editor of publishing house Open, Jin Zhong, informed the U.S.-based writer Yu Jie in early January that the publication of his book China’s Godfather, Xi Jinping, which was slated for this month, would not follow schedule because “circumstances have changed.”

Jin is believed to be referring to the fate of five people connected to another Hong Kong publishing house who have gone missing, the most recent on Dec. 30. They all worked for Mighty Current Media, which specialized in often salacious books critical of Chinese communist leaders.

“The difficulty of publishing political books in Hong Kong is already in the international spotlight,” Jin wrote, according to the HKFP. “People in the industry are feeling great fear and pressure; they want to stay out of trouble so that they won’t be the next one [to disappear]. I received many calls from friends and family trying to persuade me. Because of that, we decided after much deliberation to suspend the publication of your work.”

Yu, the HKFP reports, has since contacted other publishers in the territory, all of whom declined to print the book. He will instead publish it in late February in Taiwan, which he described to the local news site as the “last lighthouse of publishing freedom for ethnic Chinese society”; he said he is “not optimistic” about the likelihood of its sale in Hong Kong.”

The fate of his book, one caught up in a larger trend of media self-censorship, reveals mounting anxiety among Hong Kong’s political publishers, which has neared crescendo in the wake of the Mighty Current disappearances.

The last to vanish from Mighty Current was British co-owner Paul Lee, also called Lee Bo. Four of his colleagues went missing while traveling overseas in October, but Lee was last seen at his Hong Kong warehouse. After his disappearance, he informed his wife that he was in mainland China willingly “assisting” with an unspecified investigation, but this remark has caused deep concern across the Special Administrative Region (SAR) of China, where many fear encroaching mainland authority.

If Lee was abducted by mainland police from Hong Kong, it would mark an unprecedented blow to the constitutional dynamic known as “one country, two systems,” under which an autonomous Hong Kong operates its own legal and political system within the larger scope of Beijing’s sovereignty. It would also send a stark message to Hong Kong people that their constitutional and legal protections vis-a-vis mainland China are essentially worthless, and voices at all points on the political spectrum have been raised in alarm.

On Wednesday, Jasper Tsang, the pro-Beijing lawmaker who heads Hong Kong’s legislative body, called for Beijing to publicly and plainly state that its involvement with Lee did not violate the terms of the Basic Law, as Hong Kong’s constitution is known.

“You need to tell people there’s nothing that has breached ‘one country, two systems’ to alleviate anxieties,” Tsang told the Post. “Until the truth is exposed, you can’t blame people for all sorts of speculation.” 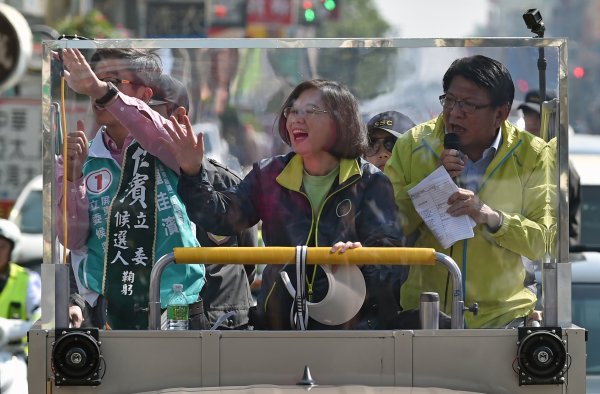 What's at Stake in the Taiwanese Elections
Next Up: Editor's Pick