A young Syrian refugee looks on at the UN-run Zaatari camp, north east of the Jordanian capital Amman, on Sept. 19, 2015.
Khalil Mazraawi—AFP/Getty Images
Ideas
By Richard Fontaine
Richard Fontaine is the President of the Center for a New American Security in Washington, D.C. and coauthor of An Intensified Approach to Combatting the Islamic State.

Four years ago the Zaatari refugee camp in northern Jordan did not exist. Today, housing about 80,000 Syrian refugees just miles from the international border, it is one of Jordan’s largest cities. It’s also emblematic of the continuing crisis that has pushed more than 4 million Syrians to flee their country and displaced more than 7.5 million civilians internally.

On a visit to the Zaatari camp this month I glimpsed a few of the stories behind the statistics.

At a health clinic in nearby Mafraq, a Syrian woman told of her husband and son’s attempt to reach Turkey and employment beyond. The men were captured by ISIS and subjected to three weeks of interrogation; the group released them only when her husband answered that the purpose of life is to glorify God. Another woman spoke of her brother who tried to flee ISIS-controlled territory and was arrested. His captors sentenced him to death as an example to any who would seek escape, and he avoided execution only when an ISIS judge showed last-minute leniency.

Refugees at Zaatari reported impossible conditions in Syria: advancing ISIS offensives, ground attacks from Syrian leader Bashar al-Assad’s military and indiscriminate Russian airstrikes. All of them had tragic reasons for fleeing. And yet most wish to return home.

While much of the Western world awoke to the refugee crisis only in 2015, when Syrians began appearing en masse on European soil, the humanitarian emergency is nothing new to Syria’s neighbors. Upwards of 630,000 Syrians have fled to Jordan, increasing the country’s population by 10%. Lebanon is now home to more than 1 million Syrian refugees, and Turkey to 2.5 million more.

Given Syria’s continued crisis, it’s likely that these numbers will go up in 2016. And so, as grim as the statistics are today, they may represent just the beginning of the Syrian nightmare.

While debate in the U.S. has focused on the Obama administration’s proposal to accept 10,000 Syrian refugees, also important is the role of the U.S. in alleviating the crisis closer to its source. America and Europe’s doors should remain open to refugees, but they should also work with Jordan, Lebanon and Turkey—and with deep-pocketed Gulf states—to align the resources and the policies necessary to deal with the challenge.

This begins with ensuring the financing base required to care for refugees. In Jordan, for instance, 85% of the Syrian refugee population resides outside camps, in urban areas where they place great stress on education, health and housing services. Child labor, begging and reduced food intake is widespread.

Syria’s neighbors are exploring innovative approaches to deal with the influx. In Lebanon, for example, where Syrian refugees constitute nearly a third of the country’s population, the government has adopted a double-shift approach to education that allows its schools to vastly increase the number of pupils. But the strain on Syria’s middle-income neighbors is palpable.

The ability of refugees to work where they live is a separate, pressing issue. In Jordan the vast majority of Syrians are forbidden legal employment, and so remain either unemployed or engaged in the gray economy. While fears abound of refugees snatching jobs away from Jordanian nationals, some 200,000 Egyptian migrant workers are engaged in positions Jordanians are loath to fill. The country also hosts workers from the Philippines, Sri Lanka and Bangladesh in jobs that Syrian refugees could fill.

As an element of a broader package of financial aid to Jordan, Turkey and Lebanon, international donors should press those countries to expand the number of work permits and enroll still more refugee children in school. The alternative is dire; at the Zaatari camp several individuals mulled the possibility of traveling back through Syria and into Europe in search of work.

The U.S. and others should also accelerate their efforts to mitigate the civilian suffering inside Syria. This means not repeated attempts via the Vienna diplomatic process to strike a grand bargain for Assad’s departure, but rather more modest attempts to improve the humanitarian situation on the ground. This could begin with establishing safe zones, giving moderate opposition groups the arms and assistance needed to clear and hold territory, and planning for an eventual international stabilization force for Syria.

In early February, key international partners will convene in London to address the Syrian refugee crisis. The London summit represents a major opportunity to get a few things right, including financial assistance, education and employment policies, and a more assertive approach to conditions inside Syria. Even in combination they will not substitute to an end to the Syrian conflict, but they could go a long way toward making the refugee situation a little less worse.

If the U.S. and its partners miss this opportunity, they will face not only a moral defeat but a looming national security threat. Parents are out of work and a strain on their communities. Children out of school are missing education and socialization. These are the conditions in which violent extremism takes root.

The role of the international community in all this is pivotal. During my visit to Zaatari, I asked a group of Syrians what they believed was next for them. Where would they reside? What would they do? “Our future is unknown to us,” one replied. “It’s not our decision.”

They’re right. It’s the world’s decision, and the world can’t afford not to act. 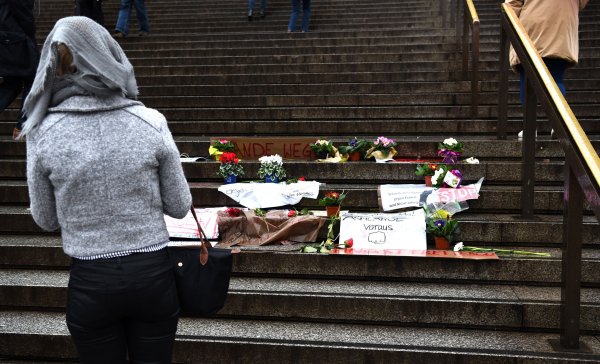 Reaction to Cologne Attacks Should Focus on Women’s Rights
Next Up: Editor's Pick