Who Is Nikki Haley? Meet the Republican Giving the State of the Union Response

While Obama is expected to discuss the accomplishments of his Administration—and the White House has suggested that the speech will be ‘non-traditional‘—Haley said she will address the challenges facing South Carolina and the country.

Here are five things to know about the rising Republican leader.

The daughter of Indian immigrants, Haley has spoken out about the Republican party’s tone toward minority issues, though Democrats have criticized her for not doing enough to promote diversity and help minorities.

“The problem for our party is that our approach often appears cold and unwelcoming to minorities,” Haley said in September. “That’s shameful and it has to change.”

Read More: The Curse of the State of the Union Response

In the wake of the shooting that killed nine worshipers at the Emanuel AME church in Charleston in June, Haley orchestrated the removal of the Confederate battle flag from the state capitol grounds. The divisive symbol was the subject of an impassioned debate that began anew in South Carolina after the shooting and play out around the country.

She was praised for her leadership in calling for the flag’s removal.

She received Tea Party support during her first gubernatorial run

She earned the support of the Tea Party during her 2010 gubernatorial run, championing voter frustration to defeat more established political rivals.

She endorsed Mitt Romney for president in 2012

Haley endorsed Republican presidential nominee Mitt Romney just before the Iowa caucuses during the 2012 presidential race, giving him the coveted support of a conservative Republican in a state critical to his election.

She has not yet endorsed a candidate in the 2016 cycle.

Haley’s handling of the Charleston shooting propelled her into the national spotlight and reportedly onto the short-lists of vice presidential contenders. She addressed the shooting and her state’s healing process when she spoke to Republican Party leaders before the first GOP debate in August. At the time, she said she was looking for a presidential candidate who was genuine.

In an interview with CNN on Monday, House Speaker Paul Ryan said Haley is a great spokesman for the Republican party with an “extremely bright” future.

“If you want to hear an inclusive leader who’s visionary, who’s got a path for the future, who’s brought people together, who’s unified, it’s Nikki Haley,” Ryan said. 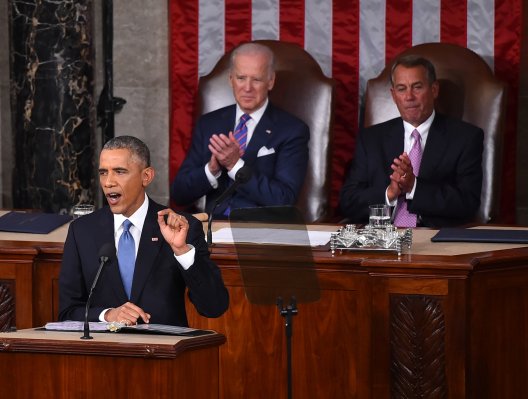 Here's What Obama Got Done After the Last State of the Union
Next Up: Editor's Pick