Vehicles from the Syrian Arab Red Crescent drive in a convoy on the outskirts of the besieged rebel-held town of Madaya, Syria, on Jan. 11, 2016.
Louai Beshara—AFP/Getty Images
By Rebecca Collard / Beirut

By the time aid entered the Syrian village of Madaya on Monday evening Rajaai Bourhan had eaten nothing but wild plants for days. “Today I had a meal of weeds,” he says. “I went with my father and we picked weeds.”

Bourhan, a schoolteacher, waited in Madaya’s central market today with dozens of others watching for the trucks to come. Many residents of this besieged city were too weak to even stand and wait.

The images and stories coming out of Madaya in recent days have been tragic, as emaciated toddlers and young children with sunken eyes tell activists and reporters they haven’t eaten in days. These are some of the estimated 400,000 people in besieged areas across Syria, where rights groups say their hunger is being used as a tool of war.

The U.N., as well as aid and rights groups, are calling for unrestricted and sustained humanitarian access to besieged areas across Syria but the logistical obstacles in their way are formidable. The transport of aid to starving masses in Madaya — held by groups opposed to the regime of President Bashar Al-Assad — was achieved only because of a difficult-to-broker pact that saw aid simultaneously delivered to Foah and Kafraya, two government-controlled towns in northern Syria under siege by opposition forces.

The deal reached with the Syrian government on Thursday came too late for some. Bourhan says he knows of five people who have died in the days since then, and as residents waited today an activist named Hassan sent TIME a photo of a dead body.

“51 years [old,] died yesterday of starvation,” read the accompanying message. The dead man in the photograph is so thin his stomach sinks well below his rib cage. His fingers are dirty and blackened, possibly from scavenging for food as many residents have been doing.

The delay was logistical, according to the United Nations and the International Committee of the Red Cross, the organizations involved in coordinating the aid response. Residents said the aid convoy had been held up at a checkpoint manned by pro-government militia.

“You have three different parties that are laying siege on different parts of the country and using starvation techniques to pressure each other into letting go of power,” says Al-Shalchi, referring to the Syrian army and various pro and anti-government militias including ISIS, the al-Nusra Front and smaller opposition groups.

In July, he says, the pro-Assad Lebanese militia Hezbollah took over manning the areas around Madaya from the Syrian army. “They are not corrupted,” says Bourhan. Almost nothing, including people, has gone in or out in the past six months. The town is surrounded by landmines, and residents say they are shot at when they try to leave.

The last emergency delivery of aid was in October and was intended to last the town two months. It has long run out. Bourhan says he has dropped from over 200 pounds to less than 150 pounds as supplies dried up. His students stopped coming to class.

At last on Monday afternoon the first vehicles of the convoy, from the Syrian Arab Red Crescent, entered Madaya with deliveries of medical supplies, surgical equipment, blankets and food. Madaya, Foah and Kafraya each received enough rations to last the population one month. It’s not a lasting solution. Residents fear what will happen after that.

But these are far from the only deprived areas in a country riven by conflict since 2012. As many as 200,000 people are under siege by ISIS in government-controlled areas of Deir al-Zour, a city in eastern Syria, and negotiating access with the militants is nearly impossible.

At the same time, the government has repeatedly denied access to areas under siege by forces loyal to President Assad. The remaining opposition groups, like those that surround Foah and Kafraya, are so fractured negotiating with them is difficult.

And while Madaya now has the world’s attention, the worry of human rights groups is that scores more are dying in silence. “That’s the fear, that we have that people who are starving to death in these areas,” says Al-Shalchi, “and we just aren’t hearing about.” 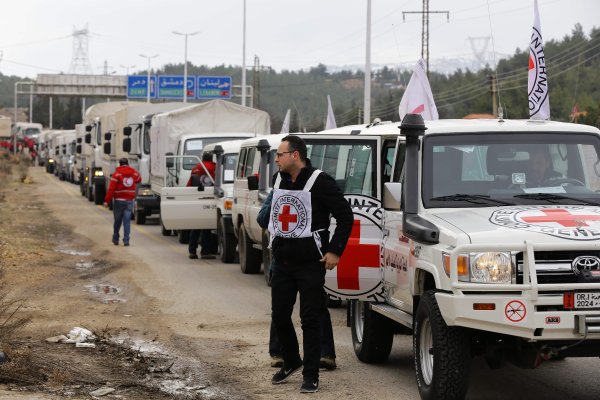 Starving Syrian Town Gets Aid
Next Up: Editor's Pick