Gregory Caruso graduated from The School of Cinematic Arts from USC. He is a director and his production company, Bristol Pictures, is based in Los Angeles. He became known as "Hot Debate Guy" during the second Republican debate.

Donald Trump is, quite simply, dangerous. His popularity thus far is predicated on his unfiltered rhetoric, void of any political correctness. He may stick out his chest or say whatever is on his mind, but this strategy is critically flawed, due to his destruction of trust. Who can truly trust Trump as the leader of the free world? Who will feel comfortable with his leadership at such a fragile time in the world?

Luckily, we have history to reference and to learn from. The qualities that makes and have made a great leader do not change from generation to generation. People might disagree on whether George Washington, Abraham Lincoln or Franklin D. Roosevelt were great presidents, but it’s difficult to argue against them as great leaders. All three presidents served at a crucial time of fragility in America’s history. All three kept our country together and moving forward. All three knew how and when to work the system of government and the separation of powers. And all three shared one vital value of leadership that Trump has yet to show: compassion. Trump supporters may argue that now is not a time for compassion, that compassion is not necessary, that compassion exercises feminine traits and exposes the weak. But strength without compassion is dangerous.

To be fair, Trump does possess some essential leadership qualities: confidence, experience, failure, success, intellect and presence. But his ever-swelling pride and braggadocios demeanor will only separate him further and further from connecting with people. And such a separation could only be bridged with compassion, sympathy and humility.

To be compassionate, or empathetic, is not to be passive, soft or quiet. When compassion is coupled with confidence, experience, failure, success, intelligent and presence, it does not weaken each value; it strengthens each. It gives these traits credibility and understanding. There is no honor in being brave and disrespectful or being courageous and belittling. Just as there is no honor in words without actions or promises without deliverance.

It was Washington’s humility that led him to turn down the possibility of an American monarchy and voluntarily step down from the presidency after two terms. It was Lincoln’s sympathy for the common man, and for every man’s right to the pursuit of happiness, that helped pave the road to the passing of the 13th Amendment. And it was FDR’s polio that gave him a deep, heartfelt compassion for people with disabilities everywhere.

A true leader knows that his (or her) job is important, but that he himself is equal to everyone. A true leader does not sacrifice compassion for strength or sympathy for boldness—he knows when to play each note and how to play them together in harmony.

But, perhaps the Republican Party feels it has no choice. Perhaps the nation is so deeply frustrated with the available options that Trump’s strong-minded approach and unapologetic attitude is better than a respectful but timid contender in such difficult and uncertain times.

America needs a leader who will not only take action but who will also bring diplomacy and resolve to our most complex global matters, lead by example, and stand as a positive and strong influence for the children of this country. 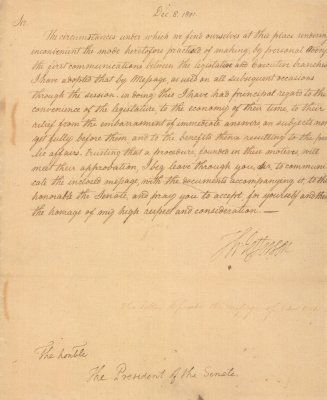 See Thomas Jefferson's Letter Declaring That He Wouldn't Give a State of the Union Speech
Next Up: Editor's Pick