In the wake of David Bowie’s death, his longtime collaborator Tony Visconti called Bowie’s final album—released last week on the musician’s 69th birthday—“a parting gift” from an iconic musician who had been diagnosed with cancer 18 months prior. But talk to pretty much any musician from the past 40 years about Bowie’s influence, and they’ll tell you that this parting gift was just the latest of many. His decades-spanning career and frequent musical reinventions have deeply shaped today’s pop-music landscape, and his legacy is apparent in even artists whose music sounded nothing like his. Below, a look at what Bowie will be most remembered for—and its lasting influence:

His androgyny and sexuality. Bowie declared himself bisexual in a Playboy interview in 1976, and while he would later back away from the label, his androgyny and sexual fluidity—especially at a time when those ideas weren’t as accepted as they are now—would help inspire a generation of performers who played with similar boundaries. American Idol alum Adam Lambert called Bowie a “key inspiration” writing for Out in 2013. “It was about the androgyny of mixing it up, and that was what was so incredible about his concepts—he was one of the first rock stars to really push the idea that sexuality was not black and white but an exploration,” Lambert wrote.

His ever-changing image. The fashion world has often paid tribute to Bowie’s colorful style, and his various alter-egos and stage personas—Major Tom, Ziggy Stardust, Aladdin Sane, Thin White Duke—have influenced the work of top designers as well as pop stars like Lady Gaga. In her early days, she used to paint a thunderbolt on her face to pay tribute to Bowie, and the recent Golden Globe winner also referenced him when she posed on the cover of V magazine in 2013 as one of her own alter egos. “I see this girl as the first incarnation of me…the Bowie superfan, playing with glitter and reflective materials, like doing a jigsaw puzzle,” she explained. According to Gaga, his impact had to do with more than just clothes. “He’s sort of like an alien prince,” she said in a TV interview. “He still runs my universe as well, like, every morning I wake up and think, ‘What would Bowie do?’ …the things he created, it was self expression for him, but also a sense of protection for who he personally is as David.”

His theatricality. “Bowie is so often cited as an influence by people, but that’s almost like saying that food is an influence,” St. Vincent wrote in the NME in 2013. The musician remembers seeing footage of Bowie’s 1974 appearance on The Dick Cavett Show and deciding to bleach her hair. “He’s so theatrical—I almost think of it as a Shakespearean thing, so it doesn’t surprise me that he caught on in Britain when he did,” she wrote in the same essay. “If there’s one thing I got from David Bowie, it’s that you can be a shapeshifter and never be pinned down; if people get the same thing from you every time, that’s actually disappointing.”

His sci-fi spirit. The way Bowie incorporated storylines about outer space and extraterrestrial beings into his music on albums like The Rise and Fall of Ziggy Stardust and the Spiders from Mars paved the way for artists like Janelle Monáe, of whom Bowie was reportedly a personal fan. Her retro style and pop songs about androids and dystopian futures have their roots in her Bowie fandom, she explained in 2014, when she covered Bowie’s 1977 classic “Heroes.” “Bowie is a part of my musical DNA in so many ways…he’s transcendent,” she told Rolling Stone. “He’s a true time traveler, and I think that that is a part of who I am and the legacy that I want people to remember. I will never expire. Nor will David Bowie.” 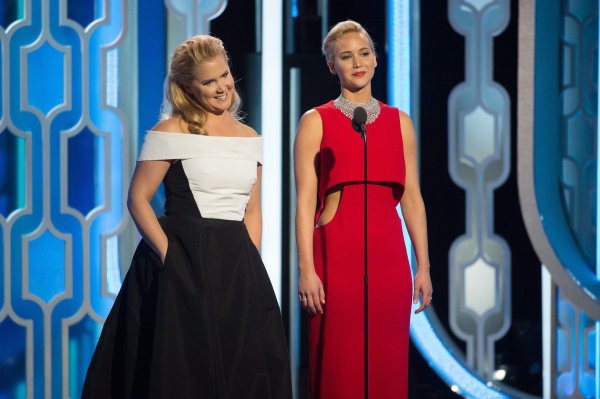 7 Suggestions for Who Should Host the Golden Globes Next Year
Next Up: Editor's Pick