Before David Bowie became recognized as one of the most influential musicians of his era, he was known as David Jones, a young London singer in a local band who was infatuated with U.S. culture and Hollywood movies.

The iconic artist died Sunday at age 69 after an 18-month battle with cancer. He was born David Robert Jones on Jan. 8, 1947, but he changed his name when he was 18 to avoid confusion with another British musician of the same name, Davy Jones, who later became the frontman for The Monkees.

“In answer to your questions, my real name is David Jones and I don’t have to tell you why I changed it,” the singer wrote to his first American fan in 1967. “‘Nobody’s going to make a monkey out of you’ said my manager.”

He spent “a decade experimenting with various identities” after growing up as “plain old David Jones, a middle-class boy from London’s suburbs,” TIME reported in 2013.

Bowie’s name change was inspired by his love for U.S. culture and ultimately the 1960 movie The Alamo, author John Lyons wrote in his book, America in the British Imagination: 1945 to the Present. “In 1965, David Jones adopted the name David Bowie in homage to Jim Bowie,” the film’s Texan rebel played by Richard Widmark, according to Lyons.

It was a relatively normal practice at the time to take on a stage name, but Bowie took that tradition one step further: David Bowie wasn’t just a pseudonym. The name change was linked to his penchant for creating an ever-changing persona, rock historian John Covach told TIME. “What started out as a simple name change became a character,” said the 56-year-old director of the Institute for Popular Music at the University of Rochester in New York. “That part was enormously innovative.”

Though he would keep the name David Bowie, he continued to play with his identity, adopting the persona of Ziggy Stardust for his album The Rise and Fall of Ziggy Stardust, which was released in 1972.

“David Bowie changed rock music in the 1970s in a significant way,” Covach said. “He was one of the first performers to really bring theatricality into rock ‘n’ roll performances. Every time he came back with a new album, there was going to be something new and different.” 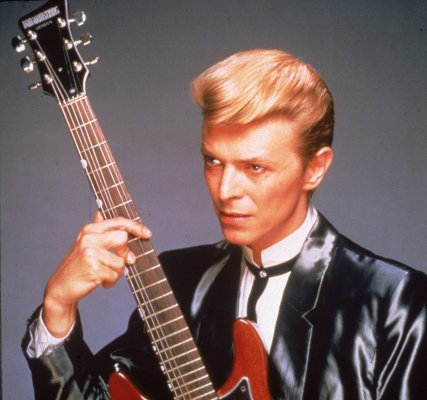