The British musician David Bowie died on Sunday after an 18-month battle with cancer, two days after his 69th birthday.

Bowie was one of the most celebrated musicians of modern times and for many years a figurehead of pop’s avant-garde. He was born David Robert Jones in South London in 1947 and used this surname in the early days of his career, but by 20, he was Bowie: the svelte, almost foppish pop singer increasingly keen on melding the traditions of rock ’n’ roll with the stylistic affectations of camp. Two years later, on his eponymous second album, he released Space Oddity, the track still praised as one of his masterpieces and the one that introduced the world to Major Tom, the astronaut who wistfully sets off to explore the cosmos.

He was a willful shape-shifter. Major Tom was one in an ensemble of alter egos, which contributed in part to the legendary theatricality of his stage shows. There was, in 1972, Ziggy Stardust, who affirmed the popular image of Bowie as a dazzling androgyne; a year later, there was Aladdin Sane, a darker iteration of Ziggy, haunted by the scepters of fame and drug addiction; in 1976, we met the Thin White Duke, whom writer David Buckley later described as a debonair “barman from hell” inspired by the artist’s penchant for cocaine.

By the early 1980s, after a decade of hit singles like “Young Americans” and “Fame,” he was “music’s most exquisite artifact,” as TIME critic Jay Cocks wrote in 1983. That year, when new-wave sounds of bands like New Order and Duran Duran were setting the tenor of pop, his album Let’s Dance propelled him to a new stratosphere of fame.

He was a pioneer beyond music. In a 1976 interview with Playboy, he casually identified himself as bisexual, at a time when bisexuality — or even homosexuality — did not necessarily sit well with the public palate. He was married twice, both times to women: first, from 1970 until 1980 to Angie Barnett, who later alleged he had an affair with Rolling Stones front man Mick Jagger, and again to the Somali-American fashion model named as Iman, from 1992 until his death. The couple had one daughter together; Duncan Jones, 44, is from Bowie’s marriage with Barnett.

Kanye West hailed David Bowie as one of his “most important inspirations” in a tribute to the singer on Twitter. He says Bowie was “so fearless, so creative, he gave us magic for a lifetime.”

British rocker Billy Idol also took to Twitter to describe his loss, saying he was “nearly brought to tears” by the sudden news of Bowie’s passing, adding “RIP.”

Former Prime Minister Tony Blair, who described himself as a huge fan, said Bowie would be “deeply mourned.” “From the time I saw his Ziggy Stardust concert as a student, I thought he was a brilliant artist and an exciting and interesting human being,” Blair said in a statement. “It was a great privilege when I got to meet him later in life.”

Comedian Ricky Gervais, who persuaded his idol to appear on his television show, “Extras,” wrote on Twitter: “I just lost a hero. RIP David Bowie.” In a 2010 article, Gervais wrote about how David Bowie inspired him and how he later met him and worked with him. He wrote: 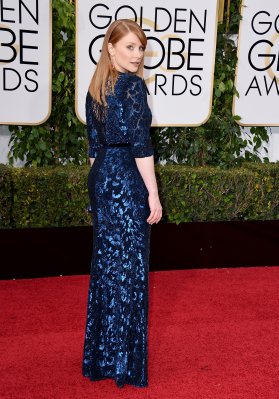 Why Bryce Dallas Howard's Golden Globes Dress Is Unusual
Next Up: Editor's Pick