Reince Priebus pictured in the Spin Room at the CNN GOP Debate at The Venetain Resort in Las vegas, NV on December 15, 2015.
Erik Kabik Photography/ MediaPunch
By Zeke J Miller

Donald Trump may be giving some in the Republican establishment heartburn, but Republican National Committee chairman Reince Priebus claims he sees no reason for concern in the bombastic GOP front runner’s candidacy.

“Look at our debates. We’re blowing the doors off these debates,” Priebus told TIME of the Republican nomination race this cycle. “They’re becoming like World Series–type events that we could never have predicted. And that will be a good thing for our party, we have to break into the culture of America and we’re doing it.”

Calling Trump a “varsity” candidate, Priebus predicted in advance of this week’s meeting of the 168 members of the RNC that Trump would acquit himself well in a general-election matchup, maintaining that Trump has been a positive force within the GOP primary. “I think that we’ve got sort of the varsity team of candidates out there,” Priebus said of the 12-person field, adding that the entertainment value has increased the party’s visibility. “I think any one of our candidates can plug into what we’re building and win a cultural vote in this country.”

Priebus’ support comes even as Trump has torn up the 2013 Growth and Opportunity Project report Priebus commission to lead the party back from defeat in 2012. The document called for more aggressive outreach into minority communities, particularly to Hispanic voters, and explicitly called for comprehensive immigration reform — a position at odds with Trump’s hard-line stances.

In response to the report, the RNC has invested tens of millions of dollars in a permanent field and data operation, which Priebus confidently argued is larger than Hillary Clinton’s vaunted operation. “I think we’re bigger,” he said. “We’ve got more.”

Priebus also maintained he’s unconcerned that the rancorous primary will affect the ultimate nominee, saying it will be “ancient history” in just a few months. “We don’t event remember what happened in August [2015],” he said. “In a vacuum everything gets over-analyzed, but in the long run I think once you get to a nominee we’re going to have an eternity to bring everything together and get everybody on the same page.”

TIME: Do you have the sense that this primary process is affecting the party’s chances in the general?

Reince Priebus: We’re charged with putting the ground game and the data operating and the turnout operation together whether voters are excited about the election in 2016 or they’re not excited about 2016. So, by staying out of the primary, we’ve sort of reaped the benefits from the overall excitement of the base. Now whether that’s for one candidate or the other is a different story. Those disagreements probably deserve a different analysis. But as far as recruiting volunteers to get the work done that we need to do, our interest and the interests of our volunteers is off the charts.

And in terms of the rhetoric, you seem unconcerned.

Yeah, I’m confident pulling the party together on message and in elbow grease when this is all over. Because you know the truth is, when you get to June, July, August, September, October, a month is like a year and a week is like a month. And it’s like an eternity. And so while we bite our nails and wonder about whether a tough primary is bad for our general-election prospects, or some people think it’s good. The truth is, I don’t think it matters because there’s so much time involved once you get to a nominee that it’s all sort of ancient history. Even as I sit here today, July and August is like ancient history. We don’t event remember what happened in August. So my point is, in a vacuum everything gets over-analyzed, but in the long run I think once you get to a nominee we’re going to have an eternity to bring everything together and get everybody on the same page.

Does the Clinton operation keep you up at night?

No, because I think we’re bigger. We’ve got more. And it doesn’t keep me up at night because I know that even if we were able to get to parity with Obama, Mitt Romney would have won. Even if Romney was able to get to 60%, he would have won. The problem we’ve got is that if you don’t have a data operation that’s worth a dime, and you’re not in Hispanic, black and Asian communities on a year-round basis, and you’re not targeting your base voters and faith voters and veterans on a year-round basis, you can’t win. Certainly you can’t win if it’s within a field goal. You have to get the race within a field goal, and then a sophisticated infrastructure can take you over the top. So that’s what we’re trying to make sure, that we never embarrass people again with an operation that isn’t up to par with our opponents and that’s what we’ve done. And we’ve done a good job of it, and no RNC has done better — ever — not even in a presidential year have they done what we’re doing, even by a long shot.

So you need the right candidate to get you in field-goal range. Are you worried that any candidates now can’t get there?

No, I think it’s the opposite. I think that we’ve got sort of the varsity team of candidates out there. I think any one of our candidates can plug into what we’re building and win a cultural vote in this country. And that’s our job. Our job is to make sure whoever that they’ve got something that’s far better than what we had four, eight years ago, and we do.

You’ve said that a lot of the turmoil in this cycle is due to the number of candidates. Is that still the case?

Yeah, certainly, when you have 12 varsity candidates left it makes everything a little bit more complicated, there’s no doubt and I can’t deny that that’s not true — it is true. But it doesn’t mean that, by the end of March or mid-April, the end of April, that it isn’t going to be very clear. There’s only so much money to go around, there’s only so long everyone can keep fighting, and at some point I think there’s going to be real clarity, and I think the timing is going to be similar to the timeframe that it’s been in the past. I know the rules pretty well, I’m pretty confident in how delegates are allocated, I helped write a lot of the rules and I believe that clarity will come very soon.

But you’re planning for a multi-balloted convention.

You obviously prepare for any scenario. Any serious organization would do something like that, and we’re confident in the process that is in place and also the rules governing the convention and the allocation of delegates. But, the other thing is we’ve written the rules, we’ve argued over the rules for years, so we understand them. It’s not like we’re sitting here in a vacuum in a world outside of our own universe. In other words, we live this world every day. We have a legal department, I was the former general counsel, I’ve been chairman for six years. There aren’t too many people who know more about how the rules work than I do or my legal staff, so it’s not like I need some sort of expert help to understand our own governing rules or how our convention might run.

Some supporters of Donald Trump and others have suggested that the RNC could rig the convention. Either way you’re putting a lot of faith in the convention committees.

Any candidate can come and get a lesson on what the rules are — the RNC and the convention. The rules are the rules, they’re written, they’re clear, and they’re going to be followed. There really isn’t — if someone has a majority of delegates in order to win the nomination, they’re going to be the nominee. The only question is if that isn’t the case, then you’re taking floor votes. And I think that’s highly unlikely, but that’s what would happen if it did.

What of those concerns about fixing the system?

Ultimately if you’ve got the votes on the floor, you’re going to be the nominee. And I think people who’ve known me as chairman — now in my sixth year — I’m about as straight up as anyone that’s anyone that’s ever sat in this office. I don’t think too many people look at me as a game player, and I’m certainly not hanging out on K-street at cocktail receptions.

A topic in the news today: Ted Cruz was born in Canada. Is he constitutionally eligible to be President?

Listen, I don’t get involved. I’m not going to get in the middle of all these candidate issues. It’s a bad place for me to be. I’ll let all these folks argue about this stuff, and I’m going to stay out of it.

Is there a lesson that the entire GOP can learn from the Trump phenomenon even if he’s not the nominee?

I certainly think that broad truths are something that people are starving for in the country, and I think people are looking for genuine and authentic people, and it’s really important to always be authentic and genuine. But I also think there are some unique qualities that he has in that he can get earned media in ways that a lot of people aren’t able to do, and that may be unique to him too, so it’s not necessarily something that other people can simply copy. I think the key is, we’ve got so many good candidates out there that as long as we get to a nominee and we bring the party together, which I’m confident we can do, having all of these unique voices all on the same page, I think that will be very valuable when you consider the fact that Hillary Clinton, her numbers are in the ditch. From all the analysis and all the talking that’s going on in the Republican primary, the fact is, Hillary Clinton’s numbers are atrocious. When you’ve got people who don’t trust you, who think you’re a liar, and now we’re getting more emails dumped from the State Department, she’s got big problems. We’re in great shape to win and I think that one lesson that’s going to come from this primary is that drama and intrigue are a good thing in America today. Boring and old news is a bad thing. And so I think that’s the lesson that people are going to take from 2016.

The interview has been edited for clarity. 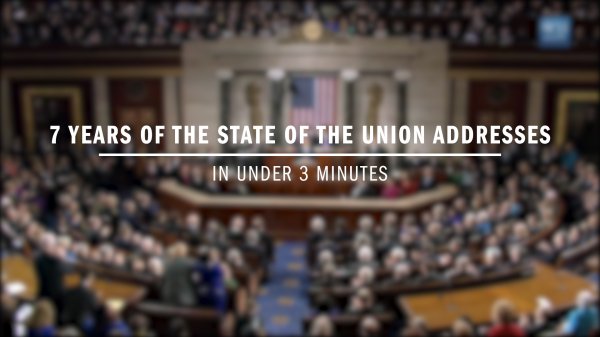 7 Years of Obama's State of the Union in 3 Minutes
Next Up: Editor's Pick