Donald Trump walks onstage for a rally at the Surf Ballroom in Clear Lake, IO on Jan. 9, 2016.
Patrick Semansky—AP
Ideas
By Joe Klein

Ok, this reminds me a little of Woodstock. (Yes, I’m that old.) I’m stuck in traffic—I mean, stopped dead—about a mile away from the Winthrop University Coliseum, where Donald Trump will be performing in about an hour. The Clash come to mind: Should I stay or should I go? A neat little u-turn and I will be released from this flood tide of alienation, surging in no-motion toward its source—but hey, I’ve never been to a Trump rally and entertainment, of a Roman sort, is promised. I nose my rent-a-car into a side street and walk.

The Coliseum is not full, but close. The crowd is white, of course. The vast majority, I would guess, are lottery-players; they see Trump as a free ticket. “He’s going to get me a better job,” says the guy who checks me in at the door. “That’s what he does in his business.” PT Barnum, to whom Trump has been compared, once said something about suckers being born every minute. That was in the 19th century; the population is much larger now. The Trump pre-game music playlist is eclectic: from serious shlock (Phantom of the Opera) to Pavarotti to the Stones (but why, “You can’t always get what you want?” Isn’t his message the opposite?). His imminent arrival is announced by the strains of Springsteen’s Born in the USA (Note to Bruce: populism usually doesn’t end well). His actual arrival is announced by Eye of the Tiger. The first thing you see is his hair, which is as metallic gold and gleaming as Notre Dame football helmets. The crowd expresses immoderate enthusiasm.

So it’s all teed up. Everyone ready to be wowed; I’m ready to be entertained and appalled. But something strange happens: the headliner is just incoherent. He does not finish stories he starts—he starts his riff about forcing Ford, which has built a plant in Mexico, to pay 35% tariffs, but something else grabs his attention…not once, not twice, maybe three or four times before he sees it to the end, and the end, when it comes, is clumsily delivered, he steps on his punchline, darting off in some other direction. It occurs to me that the Tweet is the extent of this man’s attention span. He is the ADHD candidate. It occurs to me that being a “low-energy” candidate, in Trump’s mind, means a candidate who requires actual thinking on the part of his or her supporters to be comprehended. Thought moves slower than tweet. It needs to be explained. How boring.

Am I being too hard on the guy? Well, I’ve known some brilliant demagogues in my time—starting with George Wallace—and they could take you for a ride; it was thrilling to watch Wallace or Pat Buchanan or Al Sharpton in full flight. The arguments were repulsive, but well-assembled and brilliantly delivered. Trump is shambolic. He splutters about, unattached pronouns flying off into the rafters—who is the “they” who got the great deal? The Obama negotiators? Most certainly not, but that’s who he was talking about. No, now I get—he’s switched over and “they” are the Iranians. Then he says the Mexican government is brilliant, much smarter than ours….I look around, certain these thousands of angry sheep can’t believe that (much easier to believe Obama is a secret Muslim conspirator than a thorough-going idiot) and just at the moment when I suspect he’s going to lose them, he retweets some of his best material. “I’m gonna build a wall…and who’s gonna pay for it?” Mexico, the crowd yells, three times.

In the course of an hour, there are a half-dozen moments like that. Adrenaline moments. The most powerful come with the inevitable protesters (who really are being counterproductive to whatever they espouse, giving Trump a power-moment to vamp and tell security, “Get ‘em out.” They’re fired.) In Rock Hill, the moment was particularly ugly as it involved a woman—I presume either Islamic or a Catholic nun—dressed in hijab, who was hustled out without uttering a word, the crowd growing more rabid and guttural as they saw her garb. These were the sort of people who go to hockey games and cheer only when there are fights. These used to be the folks who got their kicks watching the Christians fight the Lions in that long-ago Coliseum.

Trump was disciplined about time. He went on for about an hour, moved into something resembling a peroration—the highlight: we’re gonna bomb the shit out of ISIS—giving the folks a last adrenaline jolt: how naughty, how un-politically correct! How wonderful. They left the stadium in a matter of moments, without lingering to talk to each other about what they’d just experience…and I wondered: Did they get any nutrition out of this, anything they could take home and apply to their lives? They got a half-dozen adrenaline jolts, but nothing resembling a coherent world view. Trump didn’t celebrate the little guy, the way most populists do. He celebrated the big guy. Himself. The crowd aspired to his shamelessness, his gilt.

There are, I know, efforts to “understand” the “anger” and “frustration” of the Trump constituency. I have little patience for that; the celebration of alienation, and careless cynicism about our democracy, has become a witless plague upon us. Things are pretty damn good here. Down the block from the Coliseum, gas was selling for $1.61 a gallon. The economy produced nearly 300,000 new jobs last month and not all of them were at convenience stores. Our military is unmatched, but—as ever—in need of constant rethinking and refinement. We are living lives of leisure, even those of us who have to work more than one job, unimagined in human history. We live in an age of medical and informational miracles.

There are, to be sure, real grievances out there. There are legitimate long-term fears about radical Islam, middle class salaries and old age entitlements. But nothing to justify this level of screech. The anger of the Trump constituency simply cannot be rationally justified. It is, largely, a product of intellectual laziness and lizard-brain fear of the unfamiliar.

A final question remains: What can we, the media, who have done so much to balloon this phenomenon—who have turned his Tweets into triumphs—do about this? “You’ve got to report it when he says something like ‘Ted Cruz isn’t eligible to be President’” Senator Lindsey Graham said the other day, resignedly. Yes, and then Trump hijacks the national discussion for another week, which mostly consists of tsk-tsk opprobrium from the commentariat. (Please mark me down, in advance, for being appalled by every gross thing he says—especially those that have to do with physical attributes, like a New York Times reporter’s physical disability, the fact that women menstruate, the fact that Hillary Clinton goes to the bathroom. What a sick puppy he is.)

Actually, puckishly, I harbor a distant fantasy that my colleagues would treat him for what he actually is. He is not a politician. He has nothing—not a thing—of substance to say about the actual challenges facing the country. He shows no interest in governance—I mean, what would he do if he were actually elected? That wouldn’t be much fun at all.

*How do you think Kim Kardashian has managed her career so far?

*Should this be American Idol’s last season?

These are the sort of things he knows about. Let him talk about them. But please, please let’s not pretend that he knows anything about immigration or trade or war. Let him go after Kanye, not Cruz or Kasich. And if, in the end, that’s what the American people want…well, I hope I never have to finish this sentence. 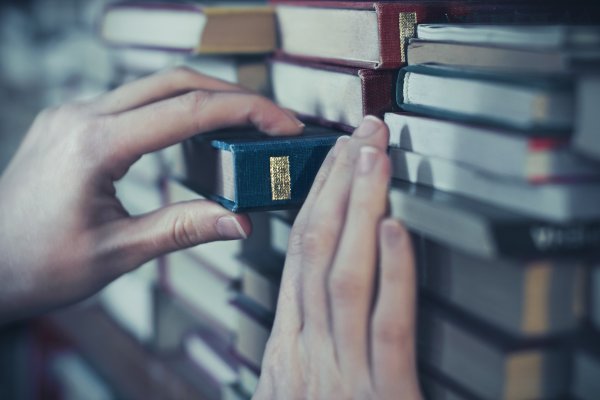 How to Achieve Your Reading Goals This Year
Next Up: Editor's Pick