This Futuristic Armband Lets You Control Your Computer Like Magic

The good: Easy-to-remember gestures; Accurate and fast gesture detection; Works with existing popular games.
The bad: Expensive; Limited standalone game selection; Hard to troubleshoot.
Who should buy it: Gamers and those with big budgets who want to control their computer from a distance.
Bottom line: The Myo Armband can accurately detect gestures, but it’s expensive and the game selection could be bigger.

Tech companies have long been trying to convince us that waving at our screens is a better way of interacting with our computers than using a mouse, keyboard, or controller. Microsoft’s Kinect, Nintendo’s Wii, Sony’s PlayStation Move, Intel’s RealSense technology, the Leap Motion Controller — the list goes on. Still, even with technological improvements, there has yet to be a game-changing device that’s really better than the status quo.

Now, one more company is throwing its hat in the gesture-control ring, albeit with a different approach. Rather than using special cameras that sense motion and depth, startup Thalmic Labs’ Myo armband detects a wearer’s movements and translates them into computer controls.

After slipping the Myo armband on your forearm, its sensors begin reading electrical activity in your muscles. This is how it’s able to detect gestures, which are then relayed to your computer to do things like control an aircraft in a game or flip through tunes on Spotify. Unlike those aforementioned technologies, the Myo doesn’t require you to be in a camera’s line of sight.

The futuristic-feeling $200 Myo differentiates itself from other gesture control gadgets in interesting ways. But it doesn’t make me believe we’ll all be waving at our computers and gaming consoles any time soon. Here’s a closer look at what it’s like to use.

The Myo band looks unlike most other wearable technologies. It’s not a compact device meant to blend in with your everyday attire, like an Apple Watch or a Fitbit. Thalmic’s accessory is sizable. Rather than wearing it on your wrist, the device is meant to fit snugly on your forearm, a prime spot for detecting muscle activity. It takes a few minutes for the sensors to warm up, so the metal interior sometimes felt chilly when I first put it on.

The first few minutes using the Myo were awkward. It felt unnatural to wear something on my forearm, let alone a vibrating band that’s noticeably larger than your average watch or bracelet. But once I embraced the new feeling, I barely remembered I was wearing it. Even after extended use, the metal sensors inside the bracelet never get too hot. The band stretches so that it can fit forearms of different sizes with ease, but it’s also possible to adjust the links to get a better fit.

There’s a slight learning curve that comes with using the Myo. But here’s where the Myo differs from similar devices: Wearers use the same five motions with every app. Whether you’re chopping watermelons in Fruit Ninja or pausing a video on YouTube, Myo’s gestures are exactly the same — they just correspond to different actions in with different software, not unlike a mouse’s buttons behave from app to app.

Of all the Myo experiences I tried, there were three that stood out: controlling music or video, playing casual games, and manipulating toys made by Sphero.

The first scenario probably wouldn’t be helpful while sitting in front of a laptop, since clicking or tapping a key would take less effort than a wave. But it did prove helpful in another setting that involved more multitasking. I often blast Spotify from my laptop as I clean up my bedroom. Wearing the Myo, I found that flicking my wrist outward to skip a song saved me a few seconds and kept me focused on the task at hand.

This worked easily most of the time, but occasionally it would confuse the motion for skipping a song with pausing one. Still, these gestures, which involve spreading your fingers to pause or play a track and waving your hand in or out to jump between songs, worked well in iTunes and YouTube, too.

Gaming is where the Myo really shines. That’s especially evident when playing endless flyer Aircraft Maniac. The game’s objective is simple: Soar as far as you can without crashing into any obstacles. It’s comparable to popular arcade game Race the Sun, which also works with the Myo armband. Aircraft Maniac feels like a natural fit for the Myo. A series of subtle wrist tilts and clenched fists were all it took to zoom past towering pillars and complete the course. It was fun and surprisingly addictive.

But nothing I did with the Myo was as amusing as using it to control a Sphero device, which are spherical robotic toys typically controlled with a smartphone. There’s just something that feels downright cool about being able to summon a tiny robot with the wave of a hand.

Using the Myo + Sphero app, Myo users can manipulate the miniature robot by rotating their wrist rather than tapping a smartphone’s screen. The app is meant to work with the original ball-shaped Sphero and the Ollie, a cylindrical robot that vaguely resembles a set of wheels. But I don’t own either of these devices. Instead, I tried hooking up the Myo armband to Sphero’s BB-8 Star Wars toy. Unexpectedly, it worked — kind of. I was able to command BB-8 by spreading my fingers and tell him to stop by making a fist. More complicated navigations were a little unstable, however.

It’s worth noting the Myo armband can be used to control certain drones from Parrot, too.

One of my favorite aspects of the Myo is also one of its biggest drawbacks. Many of the apps in the Myo Market’s gaming section are “connectors,” or apps that let you use Myo with existing games. This is an excellent advantage if you already own these games, like Counter-Strike, World of Tanks, Saints Row V, and Skyrim, among others.

But if you don’t have these titles and aren’t willing to shell out the money for them, Myo’s standalone game selection looks fairly limited. And when you take into account that not every game is available for every computing platform, that selection becomes even smaller. I imagine this will eventually change as more developers spend time building games for the Myo.

Although using the Myo feels natural once you get past the learning curve, I can’t say the same about troubleshooting any issues. If you’re having problems turning on or using the armband, you may have to download and re-install the firmware, which isn’t the most user-friendly process.

Ultimately, the Myo armband is too expensive for a gadget I can only see myself using occasionally in specific circumstances. That doesn’t mean I don’t see potential for the Myo. It could be useful as a productivity tool, allowing workers to breeze through presentations with a quick shake of the wrist rather than glancing down at a computer, for instance. And it’s also capable of working with the Oculus Rift virtual reality headset, perhaps making VR worlds feel more immersive.

Even still, $200 is a steep price for what the Myo does today. While it’s fun to use in some cases, it didn’t leave me convinced that our gesture-controlled future is here just yet. 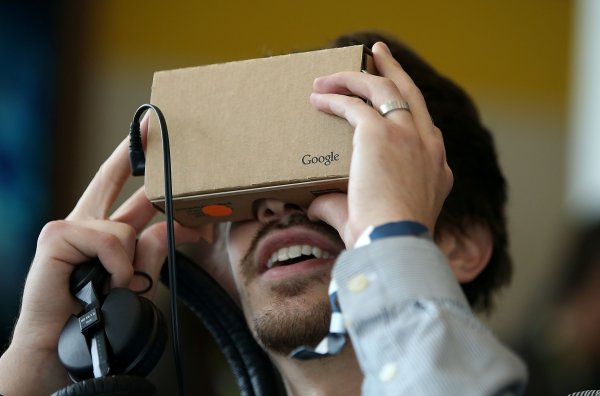 Google's Super Cheap Virtual Reality Headset is About to Get Better
Next Up: Editor's Pick