I Finally Tried Virtual Reality and It Brought Me to Tears

The light poured directly into my eyes. It flashed, strobed, pulsated, faded, and changed color, desperately begging for my attention. Meanwhile, my ears flooded with a radio dial full of sound: an ad for a steakhouse, music by Rihanna, comedy shows, everything all at once. It was, in a word, overwhelming.

Then again, you don’t visit Las Vegas for peace and quiet. But when I put virtual reality goggles on, that’s exactly what I found. Instantly, the city built on spectacle became nothing more than a shell, a blank container serving only to hold myself and whatever rich, new world I had just wrapped around my head.

Over the past four days at CES, I embraced every virtual reality (VR) experience I could get my eyes on. From the crude but accessible Google Cardboard to the much ballyhooed Oculus Rift, I tried them all. I stood alone on the deck of a shipwreck and looked a whale in the eye. I strapped into a wooden rollercoaster alongside dozens of other people and nearly lost my lunch. I climbed Mount Everest in sneakers and jeans.

Back here in reality, VR has me concerned about the future of everything: entertainment, travel, gaming, work — you name it. And I so badly want to go back in.

Before I pull back the curtain on VR, I should reveal more about myself. VR is a deeply personal experience, and what clicks for one person won’t for another. This breathtaking new medium is perception, pure and simple, and who you are in the real world influences how you respond to the virtual one.

If I had to describe myself in three words, they would be: writer, father, grump. The first term is obvious, and for the second, I’m the proud dad to an inquisitive toddler. As for the third — and CES fatigue is influencing this — I can’t stand bright, flashing lights, loud noises, crowds, congested places, and most amusement park rides (especially roller coasters). Oh, and I don’t gamble, I never do drugs, and I can barely sip on a beer per week lest I fall asleep. Yet here I am in Las Vegas, a city that’s one giant sensory overload, for CES, the world’s most overwhelming trade show. As a technology writer, it’s a place I need to be in a city I should never visit.

Prior to this week, I had never used VR. Frankly I wasn’t all that excited to try it. But after my first experience, I was hooked. Hosted by a company called YouVisit, I used the Samsung Gear VR headset to explore a collection of 360-degree experiences. In 20 minutes, I was able to explore Paris, tour a Carnival cruise ship, take in a catwalk view of Russia’s fashion week, and even enjoy an EDM concert (okay, “enjoy” may be the wrong word).

Most importantly, the experience helped me see VR as more than just a gimmick. It’s a technology that can bring people places they might not otherwise reach. A high school senior can tour a college without trekking across the country. A wheelchair-bound music fan can get in the front row at a rock concert. And a relocating home buyer can view a new house from the comfort of their old one.

My next VR experience, however, took me to a place I never imagined I’d ever visit: The deck of a shipwreck. An experience on the HTC Vive headset from Wevr, theBlu: Encounter teleports people to the depth of the ocean floor. There, a computer animated whale, apparently the same scale as a real one, swims past. It’s a quick hit in a simple environment, but a stirring one. The whale looked me in the eye and seemed to grin slightly. I couldn’t help myself from smiling back. It was a beautiful moment, but an isolating one.

More than anything, I wished my wife could have been there to share the undersea experience with me. I wanted her to know this awe-inspiring beauty. I also wanted her to abandon a world full of mortgages, diapers, rush hour commutes, and grocery shopping, even if just for a minute.

Alas, that’s one of the drawbacks of some VR experiences. In this world, you’re alone. Like a visit to the moon, it’s impossible to describe VR to someone who’s never been there. The technology isn’t just physically isolating — in some ways it divides us emotionally, too.

But there’s also a feeling of community among people who have enjoyed the same VR experiences. Wandering around CES this week, I watched dozens of people with VR goggles on. Before I put a pair on my face, I looked at these people and snickered over how goofy they looked from the outside, flailing about nonsensically. But after trying virtual reality myself, I found myself focusing on their smiles instead. Then, all I felt towards them was a genuine happiness. “Look at how much they’re enjoying themselves right now,” I thought. It’s dopey, but true.

For my money — and it will take a lot — the HTC Vive is the most engrossing virtual reality experience you can try right now. That’s mostly because the rig lets you walk around in a limited area to better explore a virtual space. Its users also hold a pair of joysticks, each resembling half a PlayStation controller. But the shape of the controllers is irrelevant once you strap on the Vive, because the computer tricks your mind into believing your hands are whatever appears on the screen.

In Job Simulator — an absurdly fun game despite revolving around mundane workplace tasks — your hands are a pair of blocky Hamburger Helper-like gloves. And because of this, the act of picking up a coffee mug or plugging in a computer is both novel and delightful. And though I was dropped into an environment that looked like an early ‘90s PC game, I couldn’t help but think about my son. At 18 months old, he’s just starting to make sense of the reality we all take for granted. Pushing buttons and opening drawers in Job Simulator was so delightful that it helped me understand why he loves opening and closing that one cabinet in our real life kitchen that I haven’t managed to safety latch.

But the VR experience that moved me to tears was Toy Box on Oculus Rift. A virtual sandbox where you can play with all kinds of toys, this game lets two players interact in the same virtual space simultaneously. Each player wears their own Oculus Rift headset and headphones, with a controller in both hands. From there, anything goes: You can take target practice with a laser gun, get in a firefight with one another’s toy tanks, or pull apart a robot doll and wear its parts.

Then my playmate, Erin, shot me with a shrink ray. Suddenly, not only were all the toys enormous to me, but Erin’s avatar was looming over me like a hulking giant. Her voice even changed as it poured through my headphones, entering my head with a deep, slow tone. And for a moment, I was a child again, with this giant person lovingly playing with me. It gave me such a profound perspective on what it must be like to be my son, that I started to cry inside the headset. It was a pure and beautiful experience that will reshape my relationship with him moving forward. I was vulnerable to my giant playmate, yet felt completely safe.

Virtual reality isn’t all illusions and epiphanies. As fun as Toy Box was, it included some toys that concerned me. Within the experience, you can play with a virtual zippo lighter and fireworks. Don’t get me wrong, it was fun as heck. But if there’s one thing everyone knows it’s that you don’t play with fire. Well, not everyone knows this — children may not yet understand the real world consequences of dangerous objects, and this game certainly won’t help. Erin lit firecrackers and threw them at me. I launched Roman candles at her. And when I was done lighting the fuses, I would often just leave my lighter on the table, open and burning away.

That’s just one way VR could be problematic. It makes me wonder how more violent VR titles, like the zombie hunting game Arizona Sunshine or the Matrix-like first-person shooter Bullet Train, will affect children’s perception of reality.

I’m not alone in this concern. Ironically, one person who shares it with me is Paul Bettner, founder and CEO of gaming company Playful. Perhaps best known for building Words With Friends, Bettner is now developing Lucky’s Tale, a cute, colorful Super Mario Bros.-like virtual reality game. Unlike every other VR experience I had, it’s played in the third person. Coming bundled with the Oculus Rift when that headset launches this spring, Lucky’s Tale is aimed at the kid in all of us.

Still, Bettner has reservations about VR’s effect on children. We chatted for almost an hour as I got some face time with the Oculus, and it’s clear that despite Bettner’s amazing games, his children are his most proud creation. And though he plays a lot of games with them, he doesn’t give them much, if any, VR time. There’s just no information yet about the long-term effects of this technology on still-developing minds.

But casting fears aside, this new medium is simply fascinating. One reason the world is fascinated with millennials is that they never knew a world without the Internet. Post-millennials, like my son, will never know life without virtual reality. Because they can live in someone else’s virtual shoes, will they be more empathetic? Forget Job Simulator — will playing the victim in a bully simulator become mandatory for schoolchildren? Will gut-wrenching, first-person films like Chris Milk’s The Displaced help them understand the world? Will they stop watching and reading the news in favor of experiencing it?

After days of immersion into the technology and being knocked off-balance by sleepless nights, my understanding of the real world started to wobble and shift. While being herded through a crowded casino, I wondered if I could step aside, mentally, into another virtual space, even without the equipment. I started to think of this reality (if Las Vegas can even be considered real) as a trick not unlike VR. Eventually, I made my way back to my hotel room. There, I stared out the window at the famous Strip as I considered selling furniture to finance and make room for my own VR setup. Meanwhile, my hotel room’s windows lit up with waves of colors slowly crawling across. I realized that, to the parade of tourists and taxis below, my hotel was a giant display, and I was nothing more than a pixel. All I wanted to be was on the other side, looking in, wrapped in light. This is what addiction feels like, I was sure of it. In Sin City, I finally found my vice. And it’s escape. 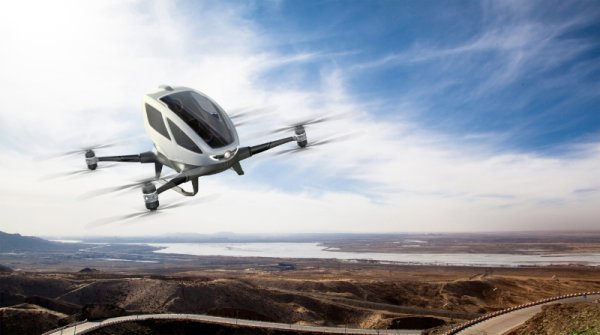 This Insane Car-Sized Drone Carries People Like a Helicopter
Next Up: Editor's Pick