The One Tech Stock Investors Are Crazy About Right Now

So far, 2016 has been terrible for investors. Global stocks have closed down every day of the year. Tech companies have been hit particularly hard, with the Nasdaq Composite down 6.3% since January trading began. That begs the question: Is any U.S. technology stock doing well?

The answer is yes. But it’s not Facebook, Apple, or Amazon, all of which have so far underperformed the broader Nasdaq. Instead, it’s T-Mobile, the little wireless carrier that could.

And investors are celebrating that accomplishment enough to push T-Mobile’s stock up 3.5% this year, prominently above the technology rubble.

Despite Legere’s always outspoken, sometimes brazen attitude, his investors have plenty of reasons to celebrate. T-Mobile said Wednesday it signed up a net total of 2.1 million new customers last quarter, marking the third straight period of 2 million-plus gains. Meanwhile, it won 8.3 million new customers throughout all of 2015.

That’s no small feat. Mobile carriers have been fighting tooth and nail over subscribers. That fighting has gotten more intense in an increasingly saturated market, one in which winning new customers often means stealing someone else’s. T-Mobile has embraced that strategy by offering incentives to switch over, like promising to pay rival carriers’ cancellation fees.

Verizon and A&T have responded with ads, ranging from the heart-tugging to the comedic, about how reliable their networks are. This cuts to the weakness of a smaller carrier like T-Mobile, which has to work harder to ensure coverage across the country.

But T-Mobile is countering. First, it’s courting AT&T and Verizon customers weary of the blood-sucking terms of the giants. Under Legere, T-Mobile has done what many thought unthinkable in the American wireless business: introduce competition and make those onerous two-year plans obsolete.

Investors liked the idea of larger market share, but worried about the cost to T-Mobile’s bottom line. Braxton Carter, the company’s CFO, said at an investor conference Thursday that in 2016, “the cash generation profile gets very exciting for us . . . We will be in the top half of our [fourth-quarter] guidance on a cash EBIDTA standpoint at at the very low end of our guidance on capital spending.”

In plain English, that translates into good news. It means that profit before standard accounting items like depreciation and amortization will be above $7 billion this quarter, meeting the company’s more bullish predictions. And it’s spending less than needed to get there. This is what investors were hoping to hear. Especially within the gloom and doom of early 2016, it stands out as encouraging.

That’s not all. Carter added that a March auction of radio spectrum could offer T-Mobile a chance to meet the mobile demands of a growing subscriber base, Carter said. That spectrum could help T-Mobile improve its coverage to current and potentially new customers.

That’s about as good news as any tech company could hope for in the first, turbulent week of 2016. But such a positive development for T-Mobile didn’t come without some ugly press for the company and its oft-uncensored CEO.

Just as T-Mobile shares were pushing higher, an established and respected tech nonprofit called out the company on one of its initiatives: Binge On. T-Mobile says the service lets users “stream all

you want for free without using your data.” Binge On includes 40 streaming services, including Netflix, Hulu and MLB, but not YouTube.

On Thursday, the Electronic Frontier Foundation accused T-Mobile of throttling video feeds of users, effectively downgrading the quality of your Netflix bingeathons. The EFF’s tests added to earlier complaints, from YouTube and others, that T-Mobile was violating “net neutrality.”

Net neutrality supporters want Internet carriers like T-Mobile to treat all online content as equal in terms of speed, keeping everything on equal footing. It’s an ideal cherished by the digital have-nots as well as some of the powerful firms in Silicon Valley. Companies like Facebook and the very incumbents Legere is taking on have fought against net neutrality and lost credibility in the process.

T-Mobile’s initial response was to say it wasn’t “throttling” video streams but rather “downgrading” them to make them more accessible on mobile networks. On Thursday, Legere responded to the EFF on Twitter with an ill-advisedly brusque response — one that’s NSFW, unless, apparently, you work in the executive suites of T-Mobile:

<blockquote>So, what Binge On does, it includes a proprietary technology. And what the technology does is not only detect the video stream but select the appropriate bitrate to optimize to the mobile device. That’s part A of my answer. Part B is, who the f*ck are you anyway, EFF? Why are you stirring up so much trouble? And who pays you?</blockquote>

According to paperwork that the EFF filed last year, the nonprofit raised $2.6 million in membership dues and raised $10.4 million from other donors listed on its site, including the Open Society Foundation, the MacArthur Foundation, and corporate-skeptic carrier Credo Mobile. Hardly a nefarious bunch. Wags on Twitter pointed to the cult TV show The IT Crowd as proof of the EFF’s longstanding geek cred.

So Legere has proven more gifted at punching up than punching down. In this dismal stock market, do investors care? Probably not. The more subscribers T-Mobile steals from AT&T and Verizon (while adding to its profit margins), the more desirable it becomes to another carrier. Investors care less about actual disruption – let alone net neutrality – than they do about their own profits. And T-Mobile is looking like a tasty acquisition candidate.

So there you have tech stocks in early 2016. Investors don’t care if the CEO curses out the good guys. Or whether it can disrupt the incumbents. They are mostly rooting for a company to be bought by another incumbent at a profit. Maybe that’s what passes for a hero in tech stocks now. But, then again, it’s hardly been a buyer’s market. 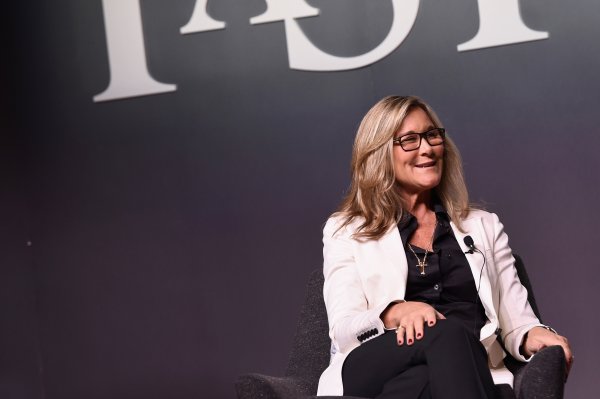 Apple's Only Female Exec Makes More Than Tim Cook
Next Up: Editor's Pick