Maine Gov. Paul LePage apologized Friday for racially charged remarks that implied black drug traffickers were coming into his state and impregnating white women, even as he faulted the media for focusing more on his rhetorical failings than the drug epidemic itself.

“My brain was slower than my mouth,” LePage, a Republican, told reporters in Augusta, Maine. But he didn’t back down from his stance that out-of-state drug traffickers are a problem. “Get your heads out of the sand please. Help us,” LePage said. “I’m sorry I’m not like you guys, but I have a heart. I have a heart for Maine people.”

“Personally, I don’t really care what the press thinks about me,” he added. “What I do care is I want the drug dealers to know I’m after them…I want the Maine people to know that I may have a slip of the tongue but my heart is to protect Maine people and that’s the end of the story.”

LePage’s comments Wednesday were an unwelcome political headache for New Jersey Gov. Chris Christie’s presidential campaign. LePage was one of the first governor to endorse Christie’s White House run, and Christie has campaigned for LePage and praised his leadership.

LePage was responding to a question at a town hall Wednesday about his administration’s efforts to combat the state’s growing drug problem, when he used racially-charged language to describe out-of-state drug dealers who wreck havoc and then flee, the Portland Press Herald reports.

“These aren’t the people who take drugs,” LePage said at the time. “These are guys with the name D-Money, Smoothie, Shifty. These type of guys. They come from Connecticut and New York, they come up here, they sell their heroin, then they go back home. Incidentally, half the time they impregnate a young, white girl before they leave, which is a real sad thing because then we have another issue we’ve go to deal with down the road.”

A spokesman for LePage quickly said the governor comments weren’t about race, rather that he was addressing what is a growing problem for Maine. But LePage faced widespread criticism for the remarks.

–With reporting by Philip Elliot 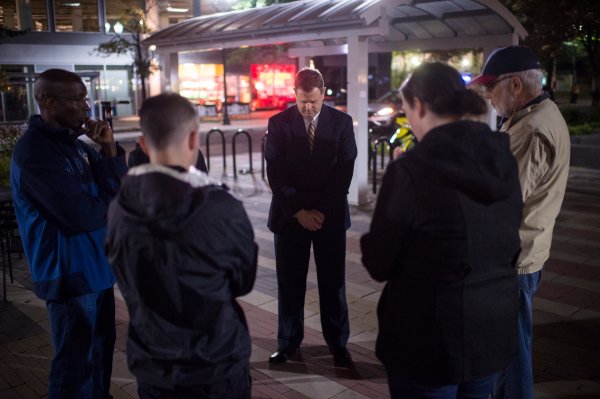