In 1996, shortly after a mass shooting in which 35 people died and 23 were wounded, the conservative Australian government introduced a series of stringent new gun laws. Since then, there has been only one mass shooting in Australia, gun deaths have gone down, and the homicide rate has dropped, even though there are almost as many privately owned firearms as before the ban. Many politicians who support stronger gun control, including Hillary Clinton and Barack Obama, have pointed to the Australian example as one the United States might follow. Others have cited the country as an example of what America should not do. Here’s what Peter, an Australian who grew up with guns and continues to collect them, thinks about his country’s approach. (Peter has asked to be identified only by his first name out of fear that his collection could make him a target for weapons thieves.)

I love firearms. I collect them and I enjoy shooting them. I probably have 30 pistols and 20 rifles or shotgun combinations. My family has always had lots and lots of firearms. My father was a shooter and we had a property when I was growing up, so from the age of 12 I had a rifle. Target shooting was offered as a school sport and I used to carry my .308 rifle to the rifle range unsupervised with my friends on Saturday for practice and competition.

Then, after the 1996 massacre, I probably had to hand in six to eight semiautomatic rifles and shotguns to the police. We got fair value for them, but I wasn’t thrilled to be doing it because I thought “Well gee, what have I done wrong?” Would anything untoward ever have happened with the firearms I owned? No.

A lot of people think there aren’t any guns in Australia any more, but there are. By some estimates there is one gun for every seven people. My local suburban pistol club has 300 members. My sons have been shooting since they were 12 and both have rifle and pistol licenses.

It’s actually not that hard to own a gun. But you do have to have a genuine reason. You have to be a member of a target shooting club or a hunter and you have to prove it. For hunting, you can get written permission from a landowner who says you are hunting on his land. Or you can join a hunting club. Pistols [handguns], on the other hand, are heavily restricted. All applicants undergo a background check by the police and there is a mandatory 30 day cooling off period for all license applications, both long arms and pistols. Firearms safety training courses are mandatory as well.

One of the biggest changes is that the government established different types of firearms for different categories of guns and ruled that each would need different licenses. Here’s roughly how it works:

Category A is .22s, shotguns and air rifles. That’s the easiest license to obtain. No semiautomatics are allowed.

Category B is for center fire rifles. You have to provide a reason for why you need a more powerful gun. I shoot feral pigs and foxes; that’s a valid reason. Again, no semiautomatics.

Category C is available only to farmers; they can own a semiautomatic shotgun or .22 but the cartridges are limited to five shots for the shotgun and 10 shots for the .22.

Category D, for semiautomatic guns and rifles, is only for professional shooters: you have to have a registered business and prove that you are earning an income through shooting.

An H license is for handguns. If you want to buy a pistol in Australia you’ve got to be a member of a target pistol club. You’ve got to do a minimum of eight competition shoots per year to keep your license. If you don’t, you lose it.

Category G is for collectors. For that you’ve got to attend at least one meeting per year.

I have licenses for Categories A, B, H and G.

I had to buy all my guns through a licensed dealer. Before ’96 you could have as many long arm firearms as you liked. And they didn’t have to be registered, so the police had no idea what people had in their homes. (Pistols have always been tightly regulated and have always been registered with the police.)

Another part of the law that changed is that the police can come to your house and inspect your storage. When we renovated our house, I built a room dedicated to my firearms collection. They’re all in large safes. All the ammunition is stored separately to the rifles and the pistols. If you have more than 15 or so pistols, you’ve got to have a monitored alarm. If someone were to break into my house, or into my gun room, an alarm would go off and the police would be notified immediately.

The police are required to inspect your gun room. Since 1996, the police have inspected mine three or four times. While they can come randomly, they normally put a call through and we arrange an agreeable time to come in and inspect it. I’m happy for them to do it. I want them to see that it’s safe.

Also, if you’re transporting a rifle or a pistol in Australia, it’s got to have a trigger lock on it, so that if someone got to your car or you’re in transit pulling up and they break into your boot [trunk], there’s a lock on the pistol or the rifle. No firearms are allowed to be transported in a loaded condition. All ammunition has got to be carried in a separate locked container.

All these things I agree with. I would feel less safe where in Texas where everybody’s walking around with open carry. That would freak me out. It freaks me out enough to see the police all armed at the airport. Would I walk around the street with a pistol loaded on my waist? No way.

In Australia we don’t want guns to protect our homes. That idea’s ridiculous. When I was growing up, I kept rifles under my bed. One day I was home sick and I was on my way to the loo when I see this guy at the front door shining a flashlight. I thought: I could get the rifle; and then I thought, I’ll just turn the lights on and he’ll run away, which is just what he did. Why would you shoot anybody?

If you were to ask the average Australian who isn’t a shooter, they would say that most people shouldn’t have access to any firearms. But the reality is that gun-lovers like me belong to a club and are doing no harm. I go clay pigeon shooting on a Saturday. I go pistol shooting on Sunday morning. That’s my hobby. And then every month or every eight weeks I go and visit my friend’s farm and hunt his feral pigs. He loses about 1,500 to 2,000 lambs a year to feral pigs. So we deal with them.

My neighbors all know that I shoot. I don’t want my full name used in this article because if the biker gangs or somebody wanted a firearm, I don’t want to wake up with a knife to my throat and someone saying “Take me to your safe.”

Of course, some parts of the legislation are annoying. I have 15 center fire rifles, .308, .243 and .30-30 are the main calibers. If I want to buy another one, I’ve got to go and fill out a permit to purchase and send it in with a payment of $30. And then I have to wait a further 30 days before that application is processed. Even though I’ve got 15 rifles at home, I’ve got to wait 30 days to get another one. That’s just stupid.

Read more: What President Reagan Can Teach Us About Gun Control

Pistols have more stringent rules. There’s a probationary period of six months and you have to turn up at your club and do eight competition shoots a year. If you’ve got different types of pistols it’s 12. So you’ve got to be committed to the sport. That’s all good. I believe in that. But a few years ago [2002], after a licensed pistol shooter shot some students at a university, the government brought in minimum barrel lengths for semiautomatic pistols and revolvers. So even though I own a German Luger, which has the same overall size as, say, a 1911 frame pistol, I can’t shoot it because the barrel length is 100 mm and not 125 mm. It has to sit in the safe on my collecting license, unfired.

People who love to shoot in Australia look at the situation in America with dismay. We all want to be able to continue our sport. All these mass killings are giving it a bad name. It’s making everybody fear people like me, where they should have no fear. One big difference is that in Australia, we think owning a gun is a privilege, and in America people think of it as a right.

When then Prime Minister John Howard proposed the gun law I marched like everybody else did in opposition to it. But I now fully endorse what he did. I didn’t like handing over my rifles, but at the end of the day, it’s a small price to pay not to have the nut-jobs walking through shopping centers and massacring innocent people.

Australia is a great country. You can go hunting, you can go shooting. And as long as you hurt nobody and abide the law you can continue to do it. That to me is freedom. The idea of having people own guns with no concept of gun safety and no reason to have a gun? That is not my idea of freedom.

NOTE: This story has been updated to reflect a murder suicide of a family in Western Australia on May 11, 2018. Mass shootings are defined as killing four or more people, not including the shooter. 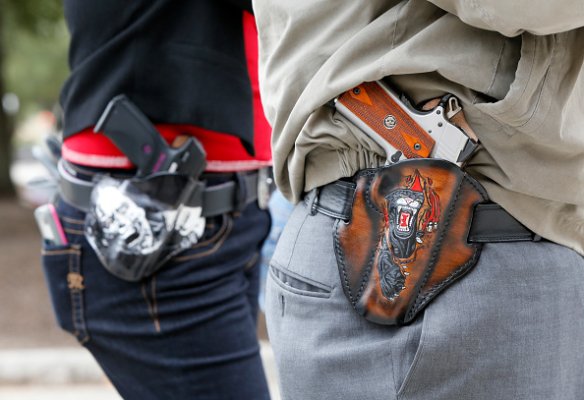