Amid questions about tensions in the Middle East and research dollars for Alzheimer’s, Marco Rubio on Thursday fielded a question about his shoes. Yes, his shoes.

The White House candidate is campaigning in show-covered New Hampshire, where voters are scheduled to cast their ballots on Feb. 9. As is custom, Rubio opens his events for questions and comments from all comers. And one voter in Nashua, New Hampshire, wanted to praise Rubio’s decision to ditch a pair of heeled boots that won him mockery online.

“You made a better shoe choice today,” the man told Rubio.

The first-term Senator had a chuckle about it and tried to be a good sport.

“So let me get this right: ISIS is cutting people’s heads off, setting people on fire in cages. Saudi Arabia and Iran are on the verge of war. The Chinese are landing airplanes on islands that they built,” Rubio said, forcing a smile. “Our economy is flat-lined, the stock market is falling apart. But, boy, are we getting a ton of coverage about a pair of boots. This is craziness. Have people lost their minds?”

The minor brouhaha started Monday, when a New York Times political correspondent tweeted a picture of the black boots. It quickly became a Thing in this campaign. Kentucky Sen. Rand Paul called them cute. Former Florida Gov. Jeb Bush said his own shoes weren’t high-heeled. Texas Sen. Ted Cruz’s spokesman said “a vote for Marco Rubio is a vote for men’s high-heeled booties. Former HP CEO Carly Fiorina asked Rubio is he could wear boots with heels as high as hers. ANd Politico tracked down the maker: Florsheim. The whole incident was a reminder that politics can be petty and trivial.

“I got a chuckle out of it,” Rubio insisted, while wearing a different pair of shoes. “Who knows? Maybe they’ll make a comeback soon. Stay tuned.” 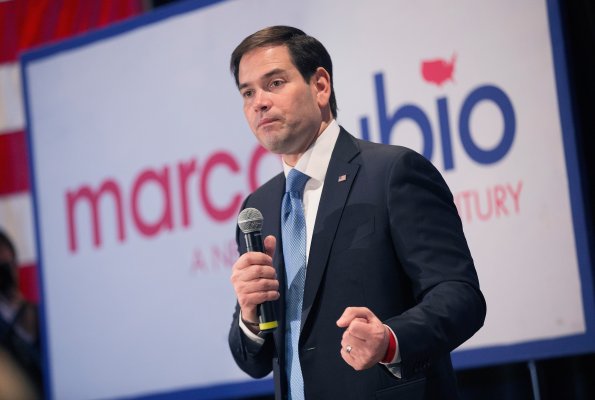